Adapted for the stage by Christopher Sergel, Harper Lee’s 1960 classic American novel To Kill a Mockingbird, set in the Deep South in the 1930s, still sounds a resonant call for integrity, compassion, and heroism in the face of racial prejudice, hatred, and injustice. Ritz Theatre Company’s heartfelt production, directed by Matthew Weil, delivers the message with warmth and commitment, in a direct and personal appeal for all of us to do the right thing, and, in so doing, to become positive role models for the next generation.

The story, inspired by the author’s own experience of growing up in Alabama during the Great Depression, is presented from the perspective of a woman — Jean Louise Finch, nicknamed ‘Scout’ as a girl — looking back on her childhood and recounting the episodes, both staggering and stirring, that launched her coming of age. Combining direct-address narration with vivid re-enactments, the Ritz’s large cast of nineteen conveys the atrocities and altruism Scout witnessed in the not-so-distant past, while illuminating the issues of race, class, and gender that incited them.

Mikal Odom is absolutely stellar in his profoundly-affecting award-worthy performance as Tom Robinson, a kind and honest black man falsely accused of assaulting the uneducated, desperate, and forlorn nineteen-year-old white woman Mayella Ewell (well-played by Kaitlin Healy), who repeatedly solicited Tom’s help, then wanted much more (which he refused to give her). He is soft-spoken and respectful at his trial, holding up his crippled left arm, tensely moving and shaking his right hand, knowing that the verdict of the biased jury will be bleak, but never once faltering in his truthful testimony. We feel his pain and anxiety in his voice and body language, admire the honorable person he is, and lament the insufferable treatment to which he is subjected.

Cory Laslocky also turns in a fine characterization as his champion, attorney Atticus Finch, who believes, and eloquently represents, the innocent defendant, knowing that the odds are against Tom solely because of the color of his skin, and that he himself could suffer the repercussions of taking up Tom’s cause in his own life and career. His delivery is controlled, thoughtful, and decent, and his closing arguments, directed to the audience and making us the jury, are clear, deliberate, and rational, as he is determined to set a righteous example for his children and his community. By contrast, Shawn O’Brien, in another standout performance, is appallingly hateful as Tom’s accuser Bob Ewell (Mayella’s savage and abusive father), capturing the low-class ignorance and racist vitriol of the disreputable town drunk.

Narration by Nellie Brown, in the role of the adult Jean Louise, is engaging and sincere, while Sofia DiCostanzo as the young Scout, Kyle Smart as her brother Jem, and Carter Weiss as their small friend Dill Harris bring the playfulness, humor, and innocence of youth to the stage, along with the maturation that comes with discovery, in their pivotal recognition of the true courage and inspiration of Atticus. Despite some forgotten lines and hard-to-hear passages when the actors turn away from the audience, the supporting members of the cast successfully define the archetypes of the period, both good and bad.

Dirk Durossette’s simple scenic design, consisting of the wooden frameworks of houses, suspended gables, screen doors, and windows, creates the feel an old-time small town, with a lone bare tree that evokes the horrific Southern history of lynching. Costumes by Tina Marie Heinz are appropriate to the era, and effectively indicate the classes and occupations of the characters. Lighting by James P. Lewis brings dramatic focus to the direct-address monologues and to the climactic nocturnal scene played in near darkness, with just a few flashes of lightning.

To Kill a Mockingbird, while addressing a most shameful subject in America’s past, reminds us that we can make a difference if we, like Atticus Finch, are dedicated to doing what’s right at all costs. That’s a valuable lesson for all times, presented with hope and conviction by the Ritz Theatre Company. 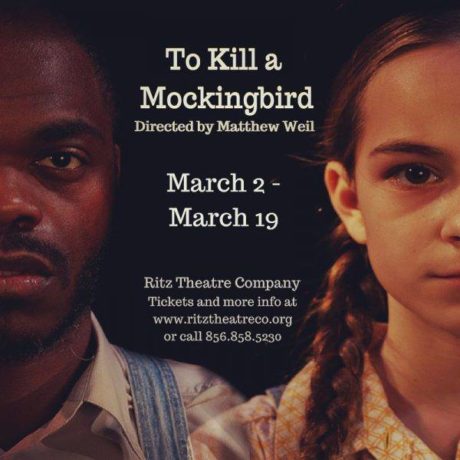