In part two of a series of interviews with the cast of Greenbelt Arts Center’s The 25th Annual Putnam County Spelling Bee, meet Rachel Pino-Elliott as Schwartzy and John Carter as Leaf Coneybear.

Joel: Please introduce yourself and tell our readers where they may have seen you on local stages.

Rachel: My name is Rachel Pino-Elliott and I’m playing Logianne “Schwartzy” Schwartzandgrubenierre in The 25th Annual Putnam County Spelling Bee. You may have seen me most recently at GAC in Zombie Prom and Seussical! I also perform in MAD Productions at NASA Goddard Space Flight Center. You may have seen me in Urinetown or The Musical of Musicals: The Musical!

John: Hello there, I’m John Carter! I am a Maryland native who has recently returned from Colorado, pursuing a degree in Theatre Education. Locally, I am from the Southern Maryland area town of Dunkirk so I had roles in Twin Beach Players productions for the past few years. Last December I performed here at the Greenbelt Arts Center in Seussical. I’m loving every minute of being in GAC shows!

Why did you want to play Schwartzy and Leaf Coneybear in this Greenbelt Arts Center production?

Rachel: Schwartzy is a dream role. I have always loved this musical (even though I’m not remarkably adroit at spelling myself) and am just happy to be a part of it. However, when I was offered the opportunity to play Schwartzy who gets to ad-lib in this show… I almost peed my pants with excitement! I have never done improv before but am a big fan of Whose Line Is It Anyway? Colin Mochrie I am not, but I welcome this challenge!

John: Leaf Coneybear is honestly a role that I have been itching to play due to the sheer nature of being able to have fun and be whimsical. I love the songs that he gets to sing because they show a greater depth to the character than he lets on. I am enamored by characters that have surprising depth to them, which is all the characters in this show.

How do you relate to your character? What do you admire about him?

Rachel: Schwartzy and I both want to save the world…if only we could save ourselves from the stresses of daily life first! I admire her so much because of her passion and convictions. Schwartzy tells it like it is! We also both have long last names that represent both of our parents. Kismet? You decide.

John: Honestly, I can relate quite a bit to my character. Being an underdog and also just thinking of the positive aspects of life while having fun is something that I am akin to so I would say that Leaf and I are pretty similar in that regard. I admire his ability to be whatever he wants to be and not let anyone hold him back.

How would you describe the music and the choreography for Putnam County Spelling Bee?

Rachel: The music is pretty fast paced. You have to see the show multiple times to get the full effect of the hilarity of the lyrics! The choreography is boisterous and goofy, just like the characters

John: The music for Spelling Bee is kooky. I like the solos because they are all very different and showcase the characters very well. For the choreography, Rikki definitely had some fun creating some chaotic moments especially for my number and “Pandemonium.” I would say my favorite choreographed number of the show is “I Speak Six Languages” because of how well it demonstrates the character in question and the moves done are downright fun!

What was Director Jeffrey Lesniak’s vision of the show and his vision of your character when you first began rehearsals. Has it changed? And was there something new about his vision that surprised you? or you found exciting to play?

Rachel: This is my second time working with Jeff Lesniak as a director. I appreciate that he takes the time to put together a stellar cast and lets them have creative freedom. Jeff’s direction to us as read-through was “I want you to go too far.” As a performer, that’s just what you want to hear! It’s exciting to have the chance to change the show beyond what’s written in the script, including coming up with new words, definitions, and sentences.

John: Working with Jeff has truly been a blast because his vision for the show is something that I was very eager to be a part of. He wanted the show to be fun and truly show off what a great musical Spelling Bee is. The vision for Leaf was pretty clear in his mind, but the surprises were so much fun to come across in rehearsal. I’ve always been excited to hear about Jeff’s next idea for my role and how he wanted the stage to be set.

Why do you think The 25th Annual Putnam County Spelling Bee is popular with audiences? What message does it convey to theater goers?

Rachel: There’s something so appealing and delightful about oddballs. Audiences adore these lovable misfits! Just listen to the song “Why We Like Spelling” (which is not in our show but you can watch on youtube!) to see the heart and soul of these kids. This show conveys to theater goers that life is what you make it, similar to how the show is what the audience makes it. Every live show is shaped somewhat by the energy of the audience, but Spelling Bee takes that several steps further with how extensively it incorporates audience participation. EVERY time you see this show it’s different, which is one of the many reasons I fell in love with it!

John: Spelling Bee is such a wonderful show and the very premise of it brings audiences to the theater. Everyone has either heard of, been to, or participated in a spelling bee in their life and I think everyone can relate to competitions in school. In particular, remember how competitions like this when we were little were such a big deal to us and nowadays they seem rather silly to consider so heavily? I believe the message this musical conveys is that it is okay to lose and that sometimes, it is actually just what you need in life.

What’s next for you on the stage or off?

Rachel: No other shows on my horizon. I’m a second grade teacher in Montgomery County, so I’ll be looking forward to the time when I don’t have to grade papers backstage between scenes!

John: Next up for me is that I will be in Silhouette Stages production of Legally Blonde as Aaron Schultz/Ensemble in Columbia, MD, premiering in May. Following that, I will be attending AMDA’s Integrated Conservatory for Musical Theatre in New York. I am ecstatic about these next endeavors in my life and cannot wait to attack them with as much zeal as possible!

What is your favorite spelling word heard onstage in this Bee?

John: They change every night! Out of the ones that I hear the most, I honestly have to go with “acouchi.” It’s such a fun word to say and to spell. If you google what an acouchi looks like, you will see that they are absolutely adorable! 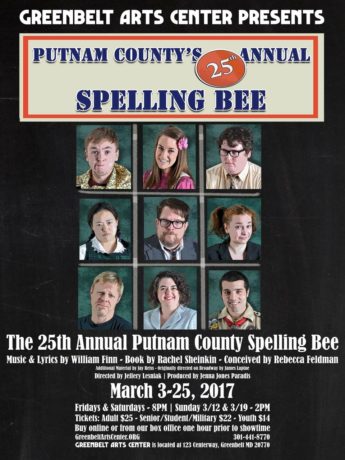