An original prequel based on James Cameron’s 2009 blockbuster film Avatar, Cirque du Soleil’s touring production of Toruk – The First Flight, now in Philadelphia for a five-day stop at the Wells Fargo Center, shows the company, as advertised, “in a stunning new light.” Written and directed by Michel Lemieux and Victor Pilon (with the guidance of Cameron, Jon Landau, Kathy Franklin, and Richie Baneham for Lightstorm Entertainment, and Guy Laliberté and Jean-François Bouchard for Cirque du Soleil), the immersive multimedia spectacle combines a dazzling design with a more fully developed narrative structure than ever before, presented by the performers in an authentic acrobatic language that is consistent with the story and its characters, but more limited and less breathtaking in the signature circus skills that we have come to expect from the renowned troupe.

Set on the mythical moon Pandora, thousands of years before the time portrayed in the hit movie that inspired it, the elaborate science-fiction saga recounts the lore of the Na’vi and their quest for salvation by three heroic teens, aided by the eponymous leonopteryx – a giant flying predator that must be lured and ridden for the very first time (the titular “first flight”), in order to save the Na’vi clans from natural disaster and extinction. For those not familiar with the popular film (or with the fictional Na’vi language spoken by the characters!), a narrator in the form of a Na’vi Storyteller, played with gravitas by Raymond O’Neill, presents periodic direct-address recaps in English so the audience can follow along with the sometimes arcane action and plot.

Carl Fillion’s monumental set and props fill the floor and heights of the arena, changing, growing, and providing the groundwork for the out-of-this-world shifting panoramas created by Lemieux and Pilon. Employing cutting-edge technology and 40 video projectors, they bring to life the lush alien landscapes encountered by the youths – Jeremiah Hughes as Ralu, Guillaume Paquin as Entu, and Giulia Piolanti as Tsyal – on their epic adventure, enveloping and amazing the audience. Our senses are bombarded by constantly moving and seamlessly synchronized images of gushing water, looming ominous shadows, a volcanic eruption, and a myriad of other natural and supernatural phenomena. Toruk’s transportive scenic design is augmented by Alain Lortie’s dramatic and colorful lighting, a real-time digital app that can be downloaded to unlock even more seat-specific in-show effects, and a primal otherworldly soundscape composed by Musical Directors Bob & Bill, with haunting vocals by Priscilia Le Foll as The Shaman, rhythmic drumming by percussionist Daudet Fabrice Grazai, and a masterful sound design by Jacques Bouche.

The astonishing grandeur of the show’s visual and aural components takes center stage, eclipsing the long slow-paced narrative and thematically uniform gymnastic elements. Absent are Cirque du Soleil’s usual daring physical feats on trapeze, tightrope, aerial hoop, high wire, and slack wire; instead we see scenes of initiation and journey, dances, battles, and hunts, choreographed by Tuan Le and Tan Loc, which evoke the rites of ancient primitive tribes. Those are interspersed with acrobatic performances designed by Germain Guillemot and apropos to the characterization of the long-tailed blue-skinned Na’vi (in fantastic costumes and make-up by Kym Barrett) as agile and cat-like in their movements. The ensemble executes impressive routines of balance, manipulation, and contortion on aerial ropes, silks, and motorized poles (with rigging and acrobatic equipment by Pierre Masse), jumping through a hoop, scaling a mountain, doing handstands, flips, drops, and tumbles, juggling boomerangs, passing a ball of light, and working enormous kites and puppets (designed by Patrick Martel) of creatures that populate the lands and sky. Among the most amusing segments is a group sequence performed by Elizabeth Brown Gagnon, Lydia Harper, Peter Kismartoni, Stacey Magiera, Alex Otto, Dustin Walston, Lisanna Ohm, and Thomas Evans on a large-scale rotating skeleton, cleverly suggestive of a teeterboard.

With Toruk – The First Flight, Cirque du Soleil diverges from its expected style and repertoire, offering a fully-integrated storyline and design. Though some fans might miss the more sensational circus stunts that dominate the company’s other shows, no one could help but be engrossed in this production’s magnificent sights and sounds. 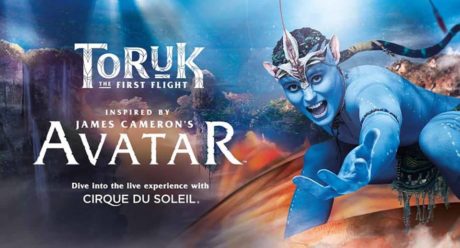