The Tony Award-winning Spring Awakening (The Musical), with Book and Lyrics by Steven Sater, and Music by Duncan Sheik, based on the play by Frank Wedekind, and directed by Jenny Male, opened last night at the Smith Theatre at Howard County Community College. It is based on a 1891 German play by the same name by Frank Wedekind. The play is in the style of Bertold Brecht, a very dark and somber look at youth as they leave childhood into adulthood. It frankly deals with topics like homosexuality, rape, masturbation, sadomasochism, suicide, and abortion. These topics are still controversial but at the turn of the last century they were revolutionary. The play was often censored and even banned when it opened in New York and London.

The plot remains fairly intact from the original script. There have been some small changes. For example, we are not sure if there really is a rape or not. It is left for us to decide. Otherwise, it is a tale of young teens growing up in Germany. Wendla (Kaity Krull) is beginning to question her sexuality, but her mother will not even tell her where babies come from. She feels the stirring of her blossoming into womanhood but is not sure what it is or how to deal with it. Moritz (Jake Foster) is also dealing with these issues. He, like most of the boys his age, feel the physical urges of adulthood. Melchior (Cole Watts) is the brilliant student who knows about sex and is willing to share his knowledge with his male friends. He is also the heartthrob of his village. Wendla is one of the girls attracted to him. Her naiveté and the cruelness and stupidity of the adults take all the children on a sad path as they lose their innocence.

The musical is artfully and sensitively directed by Male. The opening scene is remarkable as a turntable spins with just Wendla and a piece of set that seem to magically appear. There is also interpretive dancing in the show a device used sometimes in musicals to convey sexuality (e.g. Agnes de Mille in Oklahoma!). This is never obtrusive, and Male uses it to underscore the feelings of the children as well as physical acts. The dancing by Alex Krebs and Wesley LeRoux was masterfully created by Choreographer Elizabeth Higgins.

The young cast is made up of mostly students at HCC. Their talent keeps us riveted throughout this very dark story. Krull captures Wendla’s sweetness, charm, beauty and vulnerability. Her opening scene with her mother “Mama Who Bore Me” as she begs to find out the facts of life and the scene in Act II where she finds out about the consequences of her passion, “Whispering” are two of the best in the musical.

Watts as Melchoir has the difficult task of being the hero but also at times the villain. His questioning and introspection are finely reflected by this talented young actor and singer in the songs “All That is Known” and “Totally Fucked.” His despair at the end is genuine.

As the pitiful, dumped on Moritz, who does not deal well with his new body and his new thoughts, Foster is most compelling. As he faces the bottom of his sadness he sings with Ilse (Sarah Jane Bookter) the lamentations of “Don’t Do Sadness/Blue Wind.” It is heartfelt to anyone who ever thought, as they entered puberty, that the world was too hard for them.

There are some other standouts in the cast. I was particularly moved by performances of Liliana Evans as Martha the girl abused by her parents, and Bookter as Ilse, the village girl who left home-not by choice-to live with Bohemians as they sing “The Dark I Know Well.” They both mixed sweetness and unbearable sadness to their vocals.

Diego Esmolo plays Hanschen and brings some welcome  humor into the show. Hanschen is much more comfortable with his own sexuality than the other boys and Esmolo never looks uncomfortable in his performance.

The other levity is characterized by Georg (Daniel Johnston) who is titillated by his piano teacher. Johnston managed to show the awkwardness of this scene without making me feel uncomfortable.

In multiple roles as the female adults, Sierra Young flawlessly goes from the heartless teacher to the warm mother of Melchoir. Her scenes as Wendla’s mother made her seem very human not one dimensional. She is both worried and hurt.

The rest of the cast also give outstanding performances. Jordan Colea (Thea), Ashe Frost (Emilia), Gavin Shown (Male Adult and multiple roles), Chania Hudson (Anna), and Caleb Uzcatagui as Ernst are all up to this difficult assignment.

The voices of the whole cast were so impressive – one of the best Ensembles I have ever heard in a university production.

The set by Samina Veith is hauntingly beautiful. In the back are three stark trees that symbolize both the start of spring and loss of innocence at the same time. The use of oversized books to create steps and the writings all over from the children are very symbolic. The writings are like a 19th century Facebook.

The Lighting Design by Kristin A. Thompson helps create the haunting affect and dark places of the heart. The Costume Design by Robert Croghan is interesting as he has the boys still in short pants that they, obviously, are no longer comfortable in and the girls in shorter dresses that set them apart from their elders. The sound was well done by Seth Schwartz as was the Musical Direction by Dustin Merrell. A nod to Stage Manager Alison Andersen is well-deserved as well as the action and cues were finely tuned.

Spring Awakening‘s language is strong and the topics are dealt with very frankly. However, almost everyone will know one of the kids from their own past, or present. Much of the characters’ angst is a part of us all.

Spring Awakening is well worth seeing. As our own spring is proving to be a rough road so is the blossoming of these teens. And like every bleak winter, we are left with the hope of spring.

Running Time: Two hours and 10 minutes, with an intermission. 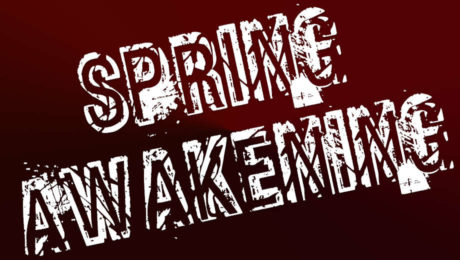 Spring Awakening plays through Saturday, March 18, 2017, at Howard Community College’s Smith Theatre – 10901 Little Patuxent Parkway, in Columbia, MD. For tickets, For tickets call the box office at (443) 518-1500, buy them at the door, or purchase them online.