Expletives, insults, and accusations fly, when an unhappy wife, alcoholic daughter, and gay son gather in the hospital room of their dying husband and father for a farewell verbal slug-fest. Isis Productions tackles playwright Nicky Silver’s The Lyons, a no-holds-barred dark comedy about dysfunctional relationships marked by anger, isolation, disappointment, and blame, keeping a tight grip on both the savage humor and the underlying sadness that plagues the eponymous family.

Directed by Neill Hartley, the entire ensemble of six is perfectly cast, spot-on in its uproarious characterizations, and masterful in its delivery. Barrymore Award-winner John Zak, one of Philadelphia’s most consistently outstanding actors, turns in a trenchant performance as the hilariously scathing patriarch Ben Lyons, his face contorted by his constant snarling, snapping, shouting, and scowling. He’s admittedly “scared to die” and, according to his indifferent wife, is “so crabby,” showing the pain of his terminal cancer as he grimaces and struggles to shift positions in his hospital bed, freed by his impending death from any semblance of social propriety, and lacing his acrimonious tirades with relentless profanities and fervent f-bombs. He’s going out with a bang, not a whimper!

In contrast with Zak’s vitriolic rage, Renee Richman-Weisband, in her terrific portrayal of Ben’s wife Rita (“She’s a bitch!” he exclaims more than once), is laughably blasé. When he irately reminds her that he’s dying, she cheerfully responds, “I know, dear. Try to look on the positive side.” She yammers incessantly about the shortcomings of her friends, devastates her adult children and husband with passive-aggressive barbs, and blithely flips through magazines in anxious anticipation of her unloved spouse’s demise, so that she can redecorate the living room and find just the right funerary urn for his ashes.

Kirsten Quinn as their daughter Lisa, a divorced mother of two, and Kyle Fennie as their unattached son Curtis, are competitive, combative, and sarcastic, clearly damaged by their virulent upbringing, maliciously revealing the confidences they shared with each other, and registering their side-splitting reactions to the ill-tempered exchanges and over-the-top conduct of their next-of-kin. Both also show another side of their emotionally impaired personalities, in their desperate yearning and absurdly misplaced attempts to find affection. Rounding out the excellent cast are Meg Trelease as the increasingly impatient nurse to this “noisy group” of “horrible people,” and Chase Byrd as the cynical real estate agent and aspiring actor Brian, who hurls more than just cutting words at Curtis during their strange encounter at an empty property he shows him.

The production’s design is simple but effective. Lighting by Bill McKinlay captures the brightness of a hospital room, the darkness of an empty apartment for sale, and the dramatic focus on Ben’s final monologue. Sound by McKinlay, Hartley, and Richman-Weisband remains clear throughout all of the high-decibel outbursts and confrontations. Costumes by Bobby Fabulous define the characters’ personalities and situations in their everyday clothes, hospital attire, and funeral wear.

Will Ben’s survivors move on to better lives after his death, or will they perpetuate their toxic relationships and repeat the same destructive behaviors they’ve always known, “locked in some war that never ends?” Find out for yourself in Isis Productions’ skillfully performed, shockingly mordant, and laugh-out-loud funny presentation of The Lyons.

Running Time: Approximately One hour and 40 minutes, including an intermission. 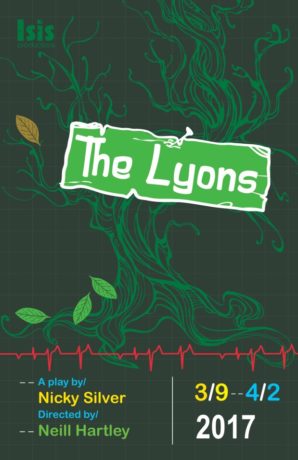