Temple University Department of Theater’s production of the Pulitzer Prize winner Our Town would have pleased its author, Thornton Wilder. This American classic was written in the early 20th century to be performed with minimal sets and few props. Directed by Douglas C. Wager, Temple’s production stays true to the source and is poignant and thought-provoking. The ensemble of student actors is believable as they interpret a range of characters of all ages in the fictional town of Grover’s Corners, New Hampshire.

Over the course of three acts (and three hours), Our Town depicts small-town life in the United States in the early 20th Century. The lives and values of the people are relatively simple. We are introduced to a cast of characters in the first act and learn more about them in the second act. An experimental play, Wilder has his characters break the fourth wall and speak directly to the audience at times. Director Wager has some of his actors enter from the “house” (audience seating) instead of from the wings to go onto the stage. Music underscores some of the most intense (and mundane) moments. The recorded music played in this production is the film score (with some adaptations) composed by Aaron Copland, with musical direction by Nathan Lofton.

The drama opens with a nearly bare stage – an assortment of chairs, tables, a bench and a lamp spread across the floor and a raised platform. Although the set design by Fred M. Duer is minimal, it is meaningful and memorable. For example, during the wedding scene in Act II, a church interior is represented by a façade and steeple projected on a screen and chairs in rows facing upstage. It is just enough to invoke the setting. Light design is by Shon Causer, and is crucial throughout the play. In addition to the screen projections, spotlights follow the characters and create moods as in the funeral scene in the last act. The sound design, by Daniel Ison, is particularly masterful. I loved the rattling of the milk bottles and the patter of cow’s footsteps that accompanied the milkman. There was no cow, cart or bottles/pails onstage, but with the sound I was able to imagine them there. Ariel Wang’s costumes were very detailed and realistic. Men and women were dressed in period clothes, including their hats, shoes and accessories. The women’s hair, supervised by Jordyn Gaber, was carefully done in the styles of the early 1900s.

As the Stage Manager, Donna Snow is the glue that holds the piece together. The Stage Manager in Our Town is both a narrator and, in a sense, a one-person Greek Chorus. In addition to setting up the scenes by identifying actors, characters and locales, as well as standing in as additional characters, she also communicates the playwright’s thoughts on certain values and events. Ms. Snow is particularly noteworthy in Act II as the Minister who marries the protagonists George and Emily, making a plea to the audience to remember its own youth while they experience a flashback of George and Emily’s courtship.

Among the student actors, Chelsea Aubert was thoroughly convincing as Emily Webb. I felt her nervousness and discomfort when she told her boyfriend George what she had observed about his recent behavior, and her reticence and fear on her wedding day. She showed considerable acting range in the third act, the show’s most moving segment. Tyler Ivey played George Gibbs sincerely and was an ideal match for Ms. Aubert in terms of intensity and stage presence. Jared Aronoff wholeheartedly interpreted the drunken choirmaster, Simon Stimson, in both Act I and Act III. Whether nearly vomiting, weaving down the street, conducting or philosophizing, each word and action was delivered with perfect timing and intention.

Another standout was Joseph Fergus as Professor Willard. He had the luxury of a prop—a big black book with many loose pages. His stance, as well as his repeated throat clearing, embodied the demeanor of this perhaps absent-minded scholar.

Temple’s Our Town is a strong rendering. The first act moved a bit slowly on opening night, but Acts II and III were tighter, and spectacularly displayed the budding talents of the actors and the designers’ innovations. This is definitely a must-see for theatre students and those who have never seen a stage version of Our Town, and for fans of the show. 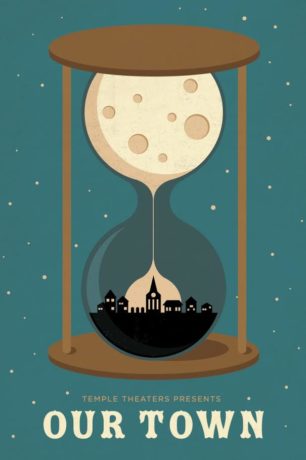 Our Town plays through March 26, 2017 and is presented by Temple Theaters at the Tomlinson Theater — 1301 W. Norris Street, on the campus of Temple University, in Philadelphia, PA. For tickets, call the box office at (215) 204-1122, or purchase them online.