When you have over 100 talented musicians and singers filling the Strathmore stage, you know you are in for some great singing and playing from Young Artists of America. In a world premiere concert, directed by Hugh Wooldridge, was an ambitous evening, though overlong, filled with Tony Award winning and Academy Award winning ‘hits’ by one of the greatest lyricists of the century – Sir Tim Rice. 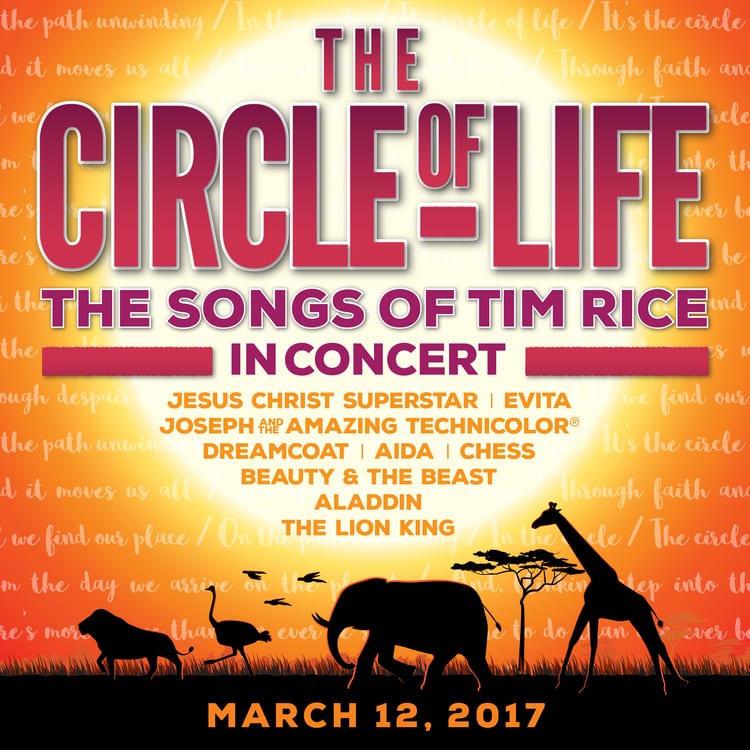 Speaking from the heavens above the stage, Mr. Rice narrated the concert, with humor, and told some stories of the history of his songs, many written wit Andrew Lloyd Webber, and Alan Menken, and Sir Elton John. My favorite story was how the song “I Don’t Know How To Love Him” began as “Kansas Morning.” The audience got a kick out of it and roared.

And is tradition, Kristofer Sanz’s energetic conducting of the YAA Orchestra stirred the young musicians (and some veteran musicians who joined them, including Broadway’s Kevin Kuhn on guitar) to play exceedingly well, including their rousing playing of the new Aida Suite, which was arranged by Lee Freeman and Paul Bogaev.

One Note: Unfortunately, the sound was, at times, too loud and, unfotunately, the young singers, on occasion, were drowned out. I am sure this will be adressed in future productions, and I hope that Young Artists of America will have other opportunities to perform this entertaining concert.

There were ‘guest stars’ joining the YAA singers and musicians for the concert, including Braoadway legend Adam Pascal who showed the young singers how to sell a song, and his vocal talents filled the Strathmore Hall with heavenly singing on “Heaven on their Minds” from Jesus Christ Superstar,”One Night in Bangkok” and “Pity The Child” both from Chess. He was joined by Wunderkind Emily Reed, on “Elaborate Lives” from Aida, where Pascal starred as Radames. It was ‘harmonies heaven.’ Pascal also performed “Radames’ Letter” with passion.

And now to Emily Reed. This young singer is astounding. My niece Michelle, a fine young sister herself, went gaga over Emily’s renditions of “Don’t Cry For Me Argentina” (from Evita) and Emily also raised the roof with her powerful and emotional rendition of “Nobody’s Side” (from Chess). And I was floored by her singing, power, and emotion. It was stunning and jaw-dropping. I hope she will consider performing on our local stages in musical theatre productions. There are so many roles I would love to see her tackle.

There were other highlights. The YAA Vocal Ensemble, joined by the Walt Whitman High School Chorus, directed by Jeffrey H. Davidson, perfomed a rouing rendition of “Requiem for Evita” and The Guest Chorus sang a gorgeous rendition of “Anthem” (from Chess), and slayed “Saul Has Slain His Thousands” from King David.

Other highlights for me were Bella Zindash’s beautiful vocals on “Home” (from Beauty and The Beast), “This is My Time” from The Likes of Us, sung by Annabel Cromwell and Cole Sebastian, “You Must Love Me” from the film version of Evita written for Madonna, delivered beautifully by Camilla Maric, and “A Whole New World” danced by Guest Artists Dancers Emanuel Tavares Brittany Yevoli and beautiful harmonies from Sam Nasar and Jillian Tate.

A lot of Dana Keane’s and Rafik Hegab’s choreography happened at the back stage and I couldn’t see it. I was concentrating on the front of the stage, that was crammed with performers, and the wonderful playing and singing.

Congratulations to all the musicians and singers. You played and sang and dancec your hearts out. And thanks go out to the guest artists, to Rolando and Kristofer Sanz, and to the parents who schlepped their kids to the many rehearsals, and whose smiles and pride filled up Strathmore yesterday evening.

Running Time: Two hours and 40 minutes, including one intermission.

Young Artists of America’s The Circle of Life: The Songs of Tim Rice was performed on Sunday, March 12, 2017, from 5-8 PM, at the Music Center at Strathmore  – 5301 Tuckerman Lane, in North Bethesda, MD. For future Strathmore events, go to their calendar of events.