One of the wonders of children is their capacity to take the simplest object and create a whole new world filled with curiosity and excitement. Paper Dreams, a new children’s dance theatre production of the Imagination Stage, is a beautiful fantasy that explores the stories that may lie within the secret life of simple pieces of paper thrown away in a waste bin. Written and directed by Claudia Moreso, the founder of Mons Dansa Dance Company of Barcelona, Paper Dreams is a creative performance that uses the non-verbal communication of dance, video projection, and audience participation to evoke the wondrous emotions of youthful imagination.

Mons Dansa is an award-winning children’s company that’s been presenting artful works for children since 1998. The US remount of Paper Dreams is directed by Kathryn Chase Bryer. In Paper Dreams, two whimsical characters who live in a waste bin unfold a series of vignettes through movement exploring what experiences might lurk within the pieces of paper that we through away. The stories have a delightfully abstract feeling for children’s theater which many times can hit you over the head with overly literal messages and plot lines. Paper Dreams has a more ephemeral quality that verges on the edge of sophistication.

A set design of colorful papier mache objects and decoupage decorations, whirling sheaves of paper, video projections of moving cars and falling leaves, flying sea gulls, fluttering butterflies and a rainbow create a mystical flow of imagery in Paper Dreams. And the wonderful musical background of Paper Dreams adds to its eclectic mood. At times the sound is the best of Soupy Sales, the dramatic flair of Spanish Flamenco, the piano bar jazz of a deep bass, the glow of a Viennese Waltz or the wilds of the Amazon jungle. Bells and whistles, and jaunty trumpet toots create the sounds of Paper Dreams that effectively add to its bewitching flair. 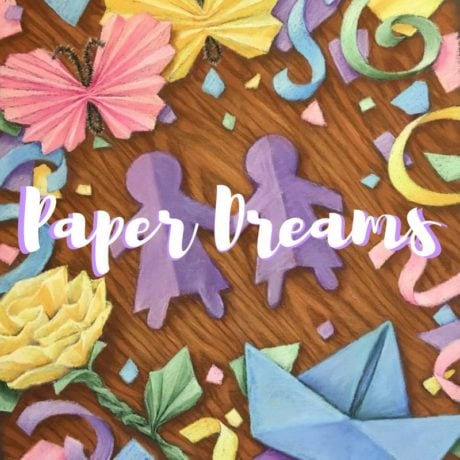 How many stories can one tell with the things we throw away? In Paper Dreams, stories unfold to uncover what lies underneath huge mounds covered with multi-colored swaths of paper-like canvasses. Papier mache dancing dolls wearing pink and blue colored tulle skirts move on their own and look a magical Corps de Ballet dance in a waltz. Colorful wads of paper fly through the air sometimes in hot pursuit or humorous jabs as the two delightful dancing characters connect with each other in synchronous movement or encourage the children in the audience to embellish the set with their own folded, creased or flying paper creations, or join them onstage.

Paper Dreams is advertised for children one to five years of age. That’s a wide developmental age range. The show felt a tad long for the babies but the 3 to 5 year olds were rapt in attention from start to finish.

Dance communicates through the body in a non-verbal language that goes beyond the strictures of cultures. Paper Dreams, and Early Childhood program of the Imagination Stage, is an enchanting production that introduces young children to the appreciation of dance as an art form. It educates and entertains and sparks inquiry into the creative process for young and old alike.

Running Time: 50 minutes, without an intermission.