Mad Libs Live! sounds like a political gathering many would want to avoid. But happily it turns out to be a (Fill-in-the-Blank) musical providing peppy songs, millennial-rich humor, and random word-play based on audience input.

This 2015 Off-Broadway work is getting its first staging outside of New York at the tiny, always-up-for-a-challenge Red Branch Theatre Company. Since a lot depends on the viability (ie. adjective: appropriate or provocative) of the words supplied by audience members on their way in, you could say there’s a different show every night at Red Branch.

Opening night fell on St. Patrick’s Day, for instance, so the performance I attended featured tons of references to leprechauns and shamrocks and rainbows, none of which added much to the evening’s handful of surprises.

Fortunately, the scripted parts of the show spring from more reasoned sources. The music by Jeff Thomson and book and lyrics by Robin Rothstein are often fun, establishing a casual and supportive game-show atmosphere for the primary cast of four.

The play is set during the televised final rounds of a high school talent search looking to crown the next “Teen Superstar.” This is not one of those “everyone’s a winner” types of contests, and the team we are meant to be pulling for is facing some stiff competition.

It’s too bad we never actually see their rivals in action. Red Branch mounted a similar cheerleading competition musical a few seasons back and it proved the more effective for it.

Without that horserace angle, Mad Libs Live! builds its drama around the characters, their backstories, and what the dream of success means to each of them.

For Virtuosa, it means stepping up from Blankville Central High School musicals to national acclaim and recording contracts. Kara Leonard is a born belter and milks the part for all of its feisty, take-no-prisoners ambitiousness in “Doing It Right!” and ”How to Be Famous.”

Gogo is a star quarterback and all-around athlete/performer who hopes that proving himself in this new arena will somehow win back former girlfriend Lindsay. Dumar Valencia is energetic and unselfconscious in everything he does here, plus he sells “The Most Awesome Athlete in the World” with an irresistible, upbeat charm.

Geyser is the familiar science nerd who hopes that singing will bring him some actual real-life friends. Brady Stevens is amusing and animated in this broadly stereotyped role, making the most of his solo singing parts in “Friends 4Ever” and “You Give Me Meaning.”

Finally there is Merrily, everyone’s super-accommodating girlfriend, who is ready to come out of her shell. She is a poet and writer, but she is to blame for all the blanks in the songs that will need to be filled via audience collaboration. Returning Red Branch favorite Meaghan Anderson brings a sweet face and a sweeter voice to the songs ”How’s It Going Down?” and “Fearless.”

While they add a fresh stage presence to these rolls, the likable cast members can’t fill in the basic blanks in the characterizations. Director Janelle Broderick works wonders within the same limitations, and keeps the brisk forward pace of the hour show from faltering.

Choreographer Sarah Luckadoo gives the kids some nice moves that also keep the show on its toes. Music Director Tiffany Underwood Holmes coaxes some amazing choral harmonies out of the group, though at other times the music sounds disconnected from the singers on stage. The audio mix involving an announcer’s voiceovers also tends to get buried.

Lighting Designer Lynn Joslin provides a novel “memory” effect when the play flashes back to earlier times. More could be done with delineating these flashbacks and those “televised” stage performances from the rest of the play.

With this area premiere, Producing Artistic Director Stephanie Lynn Williams and Managing Director Tiffany Underwood Holmes are beginning a promising new season. Still to come are the musicals Lysistrata Jones, The Bridges of Madison County, and a new stage version of DreamWorks’ Madagascar. It’s not too late to buy subscriptions and support this fearless and engaging local playhouse.

Running Time: About 60 minutes, with no intermission. 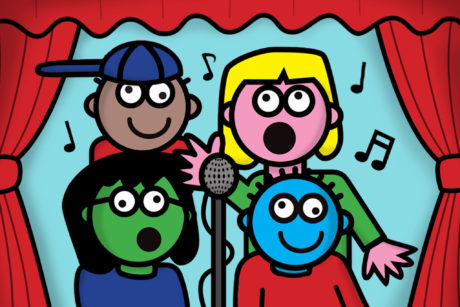