I had so much fun last night at Chesapeake Shakespeare Company’s (CSC) The Taming of the Shrew. There’s no telling what you will get when going to a production of Shrew because it’s known to be one of Shakespeare’s “problem plays” and it is a struggle to reconcile some of the scenes with our modern sensibilities – by which I mean feminism. However, Director Ian Gallanar and assistant director Ty Hallmark did a wonderful job softening Petruchio’s violent moments and developing a real relationship between Katharina and Petruchio so that, by the end, it was believable that they had come to be partners, and perhaps even equals. And they just made it silly! This production was bold and unafraid to take advantage of every comedic moment possible. I imagine it felt how Shrew would have been played in Shakespeare’s time – very big, lots of humor and music, and quite bawdy.

This laugh-out-loud production was absolutely a team effort by the ensemble. They were natural and comfortable with each other, which let them play off one another throughout the show. Each cast member was loud and clear, making his or her words easy to understand, which is important in a Shakespeare play. As a team, their comedic timing was on point, and their audience interactions broke the fourth wall in the funniest way, which only drew the audience in more.

In this team, there were some truly stand out performances. Valerie Fenton and Ron Heneghan have excellent chemistry as Katharina and Petruchio. Fenton was fierce right out of the gate, and when it came time for that troublesome ending monologue, she navigated it with apparent ease, nimbly switching between mocking convention and sincerely expressing her new devotion to her partner.

Heneghan was an exuberant Petruchio, filling the stage every time he walked on. His high energy was made all the more special, though, during his moments of softness. There were a few moments with Katharina where he came down to soft, natural realism, which was so genuine in comparison that it was almost jarring, but in a good way. You could see how he was able to tame this shrew.

In some productions I’ve seen, Bianca is a throw away character, portrayed as bratty and spoiled, but Kelsey Painter played her with lovable sweetness. Painter was also hysterical as Pedant, in her big glasses spitting on everyone. Eric Poch stood out in the ensemble in his performance of Lucentio and Grumio. Poch was perfectly over-the-top and knew how to work the audience.

The costumes and hair and make-up design were to die for. Jacy Barber tied the production’s concepts of Elizabethan bawdiness and modern-day feminism together in her designs. The cast was in period make-up and ruffs with modern clothing. Barber’s eye for details was both impressive, and helped tell the story. I loved seeing that every button on Grumio’s suit jacket was different. I knew the exact moment Katharina and Petruchio started coming together as a team because their costumes suddenly matched. Barber’s wigs were excellent, as well. They were high quality, moved naturally, and were so much fun.

The set, designed by Daniel O’Brien, was simple and effective. It greatly resembled the Elizabethan stage with a main entrance upstage with a balcony above it. The footlights all around the edge of the thrust stage were a lovely touch. They reminded me of vaudeville shows, which felt appropriate in such a clown-like production. O’Brian did the lighting design, as well, which was effective at complimenting the work on stage by shifting to illustrate the tone, and occasionally making a bold statement, which added dramatic humor to a moment.

David Crandall’s sound design was terrific. The pre-show music and transition pieces throughout the performance were playful and fun, keeping the audience’s energy up and their attention focused. The songs performed by the cast were so great. I love when companies perform pre-show and intermission music. It adds one more layer of fun, especially when it’s a cast like this one with such nice voices. Kevin Alan Brown (Tranio, Curtis) can sing “Stand By Me” to me anytime. He played guitar well, and I found his voice charming.

The cast of Chesapeake Shakespeare Company’s fantastic The Taming of the Shrew deserves to be seen. If you’re looking for a night out filled with laughter, I highly recommend you run and buy tickets now!

Running Time: Two hours and 20 minutes, with a 15-minute intermission. 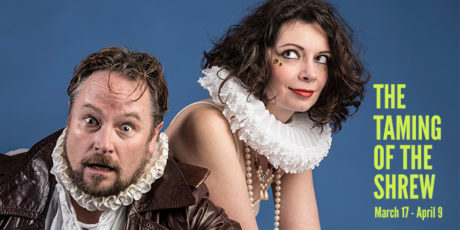 The Taming of the Shrew plays through April 9, 2017, at Chesapeake Shakespeare Company – 7 South Calvert Street, in Baltimore, MD. For tickets, call the box office at (410) 244-8570, or purchase them online.