It’s probably helpful to be well versed in Chekhov and Greek tragedies to understand many of the in-jokes and allusions in Christopher Durang’s 2012 Tony Award-winning play Vanya and Sonia and Masha and Spike now being performed by Prince William Little Theatre at George Mason’s Hylton Performing Arts Center; but it’s not essential.

After all, the themes Anton Chekhov explored in his plays – family dysfunction, sibling rivalry, mid-life crisis and jealousy – are universal in both theater and life.

The play opens on a large stage made small by Lighting Designers Ken and Patti Crowley’s unique use of lighting to mark the room and Set Designer/Director Suzy Moorstein’s simple furnishings to depict a smallish house in a rural setting of a family estate—or cherry orchard if you aren’t too fussed on how many trees make up an orchard.

All six scenes in the two act, 2 hour and 25-minute play happen in this same small room. You get the sense that nothing in these rooms ever changes. When siblings Vanya, portrayed by Emmett Lee Bales, and Sonia, played by Ellen Woodstock, enter the room, you just know that this is a scene that is played over and over in that same never changing room.

These two are very much products of their archetypes. Vanya is a stunted gay man in his late fifties who never left his parents’ home; Sonia, the self-proclaimed unloved adopted, bipolar daughter of professor parents who, late in their life, suffered from Alzheimer’s and died in her and Vanya’s care.

They are understandably angry, bitter and depressed about their codependent lots in life, and yet have no intention of changing their circumstances. Sonia, so averse to introducing any other person or event into her life, suggests that she and Vanya should be together since she’s not technically related to him, forget the fact that she’s very much not his taste.

Thankfully, this theme fades away the moment they are visited by their sister, Masha, played by Jenny Higginbotham. Masha is the one who got away from the responsibility of their parents, who had a life, who was a successful actress and is everything her siblings are not. With her is young boy-toy Spike, played by Timothy Caron, who is very much Vanya’s taste… and Nina the young, aspiring actress niece of the neighbors, played by Becca Harney.

Added to this melee of type is the comic relief, Cassandra, portrayed by Tina Mullins, the soothsaying housekeeper who is boisterous in her unwanted, and most times nonsensical predictions and omens—many of which come true to some extent throughout the play.

As much as this is a play about relationships, it only comes truly to life in small character moments. For example, Woodstock played Sonia satisfactory throughout, but there is this moment in the second act where the actor stopped playing the part and truly became Sonia. It was like she breathed life into the
play that before that had only been alluded. You feel her elation and get completely caught up in her character’s play-acting.

For Bales’ Vanya, the moment comes a little later and instead of bringing the audience to his character’s joy, he lays the character’s heart out bare for us to mourn the death of a time, place and a loss of purpose. It is quite remarkable and it doesn’t even matter that it seems completely out of character and a bit maniac, you are too invested to care.

Just when you think you’ll never smile again, you are reminded that Cassandra has been ridiculous throughout. For Mullins’ Cassandra doesn’t just have a moment, she has an entire spin-off’s worth of them. From the second she enters the stage, Mullins delivers her character’s over-the-top soliloquies with such impish glee, you can’t help being infected, even though her character’s motives and presence doesn’t really make any sense. As with Vanya’s moment, you just don’t care.

And in Prince William Little Theatre’s production of  Vanya and Sonia and Masha and Spike, it’s safe to say, it’s the performances of the entire ensemble that sells it.

Running Time: Two hours and 25 minutes, with a 15-minute intermission. 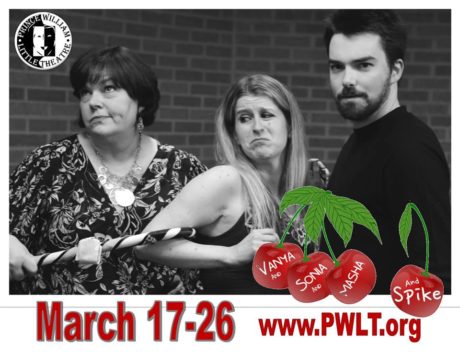 Vanya and Sonia and Masha and Spike plays through March 26, 2017, at Prince William Little Theatre performing at the Hylton Performing Arts Center – 10960 George Mason Circle, in Manassas, VA. For tickets, call (888) 945-2468, or purchase them online.