It’s not always easy to decide who you are and what you want to be when you grow up, especially if your father, ex-boyfriend, new date, and society at large, in both Canada and the US, are pulling you in different directions. That’s the premise of Athena Theatre Company’s world premiere of Sub-Basement by playwright/artist/author/human-rights activist Tom Block, playing a limited engagement at IRT Theater. But it’s not just the confused protagonist Adrienne who can’t make up her mind. The play itself, after nearly three years of development, extensive reworking, and rewrites (according to the program notes), suffers from the same plight of indecision, in its muddled mash-up of dark romantic comedy, existentialist angst, fantasy, absurdism, metaphor, allegory, apocalyptic vision, self-referencing, and socio-economic commentary on normalcy, homelessness, and a life in the arts, with a few awkward movement-based segments thrown into the erratic mix.

Directed by Hunter Bird, the show works best in its fast-paced funny opening scenes with Adrienne, a struggling poet-at-heart who has enlisted as a trainee in the Royal Canadian Mounted Police, and Simon, a law-school student she connected with on Facebook and arranged to meet at the Port Authority Bus Terminal. Portrayed with gusto by Veronique Ory and Patrick K. Dooley, the socially-inept pair is hilarious as they over-share, excitedly bond with each other’s nerdy inclinations, and relish the laughable clichés of middle-class life.

The tone and pacing of the play then take a dramatic shift, as Adrienne revisits the disappointments of her past and encounters the sub-culture of New York in her mind and through the strange machinations of Arnaud and Gustav – two mysterious homeless men who are determined to redeem themselves by making a difference in her life, but who also disagree on what is best for her. Both Barry Phillips as Arnaud (a failed poet) and Zenon Zeleniuch as Gustav (a former climatologist and dramaturg) are unexpectedly intelligent and articulate (sprinkling their conversations with words like “anon”), while delivering the message that, because of the inequities in our society, any nonconformist, artist, or dreamer could just as easily end up on the streets.

Jonathan Cottle’s set changes easily from a coffee shop in the Port Authority to the street to the other locales in Adrienne’s odyssey, with movable walls and a few simple props. Transitions into the realm of irreality are signaled by Ross Graham’s effective lighting and Patrick Lachance’s original music and sound, and costumes by Antonio Consuegra define the situations and attitudes of the characters, and evince the changes in Adrienne over the course of her journey.

While the actors and designers capture the different personalities, personifications, moods, and theatrical genres, Block’s theme becomes redundant and the style of the piece increasingly inconsistent. At present, Sub-Basement is still in need of some revision and a clear decision as to what it wants to be. 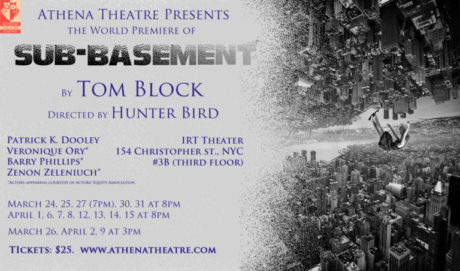 Sub-Basement plays through Saturday, April 15, 2017, and is presented by Athena Theatre Company at IRT Theater – 154 Christopher Street, #3B, NYC. For tickets, purchase them online.