Something about the RMS Titanic’s sinking has, for the past hundred or so years, always struck a chord with the American public. There have been many books, movies (particularly the 1997 James Cameron epic), and even board games inspired by the tragedy. And in 1997 (a good year for the ship), composer Maury Yeston and book writer Peter Stone created Titanic: The Musical. The show would go on to win 5 Tony Awards including Best Musical, and now is being performed by Our Lady of Good Counsel High School.

I should point out that this is NOT a musical adaptation of the James Cameron movie. Jack and Rose have no place in this show. I’ve personally never cared for the movie, which to me romanticized a real tragedy and is grand in scope, but melodramatic in its presentation. Titanic: the Musical instead focuses on the real people on the ship that fateful night. There isn’t so much of a plot, but an exploration of characters and themes. One of the themes that really shines in this show is the idea of class; how no matter what our station is in life, we are all equal in the face of tragedy.

Director Kristina Friedgen, really hit this theme home with this cast, particularly in the second act. There’s a chilling moment where a mother and father are singing to their young son about what is happening, knowing full well that they may never see the father again. 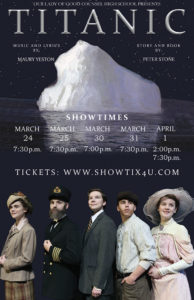 One of the notable aspects of the original production of Titanic was its Tony Award-winning set design. In this production (designed by Christopher Townsend), the set pieces are minimal and setting is told mainly through projections. When the ship’s architect Thomas Andrews comes on and sings about the building of this great ship, we see projections of the original designs for Titanic. I thought this was effective, especially at the end of Act One when the ship has hit the iceburg, and the supposed image of the iceburg appears.

Given how hard the material is to perform, the ensemble did well in their singing. Standouts among the cast include Patrick Ehrman (Thomas Andrews), Luke Amato (J. Bruce Ismay), Ian Coursey (Frederick Barett), Sumie Yotsukura (Alice Beane), and Schuylar Johns (Kate McGowan). In a cast of over 50 kids, the ensemble sounded full and grand.

Even more impressive was the orchestra pit. Made up of 16 musicians, the lush orchestrations really shined through, thanks to the musical direction of Dr. Richard Slocum.

Titanic at Our Lady of Good Counsel High School offers a really moving story of tragedy with beautiful music and a game cast. So, come aboard the good ship and see Titanic.

Running Time: 2 hours and 30 minutes, with one 15-minute intermission.

Titanic: The Musical plays though April 1, 2017, at Our Lady of Good Counsel High School – 17301 Old Vic Boulevard, in Olney, MD. Tickets may be purchased at the door, or online.