In Part One of a series of interviews with the cast of Pygmalion at The British Players, meet Jenn Robinson.

Joel: Please introduce yourself and tell our readers where they may have seen you perform on stage before. What roles did you play in these shows?

Jenn: My name is Jenn Robinson. Most recently, I have appeared as Sammy in The Tin Woman with PGLT, Gwendolen Fairfax in The Importance of Being Earnest at Laurel Mill Playhouse, and Lady Caroline in Enchanted April at Greenbelt Arts Center, which was also directed by our lovely Pygmalion director, Pauline.

Eliza Doolittle is a bit of a bucket-list character for me. She’s a chance for any actress to show strength, poise, and range. When Pauline told me that she was directing Pygmalion, I had to audition, even though I’m also planning a wedding!

I play Eliza Doolittle, a scrappy lower-class woman who decides to take a stranger’s brag at face value and goes to learn to become a lady. I certainly respect the verve she shows to walking up to Professor Higgins’ house, and although I don’t know if I would be able to do the same, I definitely relate to the sassiness she shows at all stages of her transformation.

Pygmalion, from Eliza’s point of view, is about a woman who must overcome not only the strictures of social class, but also the ignorant neglect of her own teachers.

Eliza is not only a large stage role with a lot of lines, but it also requires a distinct transformation. For me, that meant studying two dialects that are not my natural dialect: Cockney and Received Pronunciation. RP is something I’ve done before, but I was grateful for our fantastic dialect coach, John Barclay Burns, for helping me through learning my Cockney accent. But on top of all of that, Eliza had to show a physical transformation from a sloppy guttersnipe to a proper lady, and so I can still hear Pauline reminding me to slouch in the first two scenes of the play!

My favorite line Eliza delivers is when she is negotiating with Higgins on the cost of her lessons and says that she knows her friend pays eighteen pence an hour for French lessons, but says you him, “Well, you wouldn’t have the face to ask me the same for teaching me my own language as you would for French, so I won’t give more than a shilling. Take it or leave it.”

As far as the rest of the cast, I’ve made no secret to the rest of our cast and crew that my favorite character in the show is Eliza’s father, Alfred Doolittle. In particular, he makes a comment about being caught between “the Skilly of the workhouse and the Char Bydis of the middle class,” a comment that highlights not only his own ambivalence on issues of wealth, but also a surprising eloquence and intelligence, to be referencing a Homeric epic, despite being a laborer and not a scholar. And it hearkens back to some of the classical inspiration of the play. 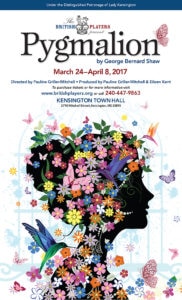 The issues of class and gender struggle are just as relevant today as they were over 100 years ago when Pygmalion first appeared. In particular, Alfred Doolittle’s lamentations about middle-class morality are of particular interest in a world when the wealthy often make the rules by which the poor get help.

The ending of Pygmalion is far less romantic than the ending to some of the derivative works with which others might be more familiar, but I would have to say, I like the ambiguity of it. Eliza is not meant to be a romantic heroine, and giving her a “happy ending” with a lover would rather miss the point of the play, I think.

The issues of class and gender struggle are just as relevant today as they were over 100 years ago when Pygmalion first appeared.

Right now, nothing. But who knows what the future will bring?