There is a profound depth of directing and acting talent in the Baltimore-Washington area. Much of that talent was on display at 10x10x10, a collection of plays by area playwrights, which is playing at Fells Point Corner Theatre (FPCT). The configuration of this excellent show is ten minutes per play, for a total of ten plays. With stellar actors, wildly varied scripts and sharp directors, 10x10x10 is a must see for serious theater lovers.

The plays were enlivened by a stellar group of actors, including: Betsey Lyons, Helenmary Ball, Michael B. Zemarel (who directed three plays in last year’s 10x10x10), Thom Sinn (seen recently in Vagabond Players’ All My Sons), Mia Robinson (who in addition to being an actor, holds a B.S. in Engineering Physics), Francis Cabatac, Meghan Stanton, Crystal Sewell, Steve Barroga and the incomparable David Shoemaker (aka “That Dude” as I named him in my review of Trust).

The show started with a play entitled Hologram, by Utkarsh Rajawat. Starring Lyons and directed by Justin Lawson Isett, the story centered around a tortured-soul holographic persona. Played with pathos by Lyons, wearing a white Princess Leia-like robe, the titular hologram evoked a range of emotions in a short period of stage time. 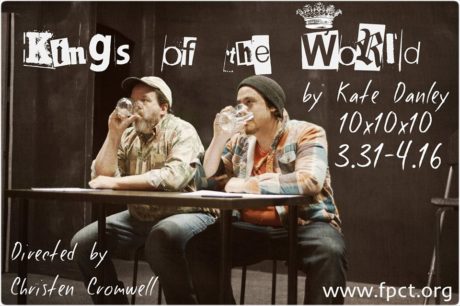 The second play was Kings of the World, by Kate Danley and directed by Christen Cromwell. In this one, two good ole’ boys, well played by Sinn and Zemarel, sip beers and talk up their dislike of politicians, until the country music being piped into the bar changes to something totally different, as does their mood. Ball was excellent as the nonchalant waitress.

Next up was the satirical spoof, The Second Episode of Dyke Tracey, by Dian “MJ” Perrin. Directed by Isett, Robinson comically played a lesbian detective (wearing a black fedora\suit combo that evoked Michael Jackson’s “Smooth Criminal”) trying to find out who was poisoning “The Queen.” Ball, Lyons and a dragged-out Cabatac were among her suspects.

Meridian Trench, by Rufus Drawlings, centered around a “Princess” of a public park and featured strong performances by Sewell and Cabatac, who brilliantly played a cane wielding quasi-counselor-magician-poet. Meridian Trench was expertly directed by Ben Kleymeyer.

After Meridian Trench, there was an ominous tone taken by Dog Years, written and directed by Peter Davis, which followed a small time hood, Jasper (Cabatac), who prays to God to save his brother (injured in a robbery attempt) as they are hiding out in a cabin. Shoemaker impressively played a Clint Eastwood-like, mystical stranger who entered Jasper’s world—and challenged Jasper in surprising ways. Cabatac’s Jasper experienced an impressive array of emotions. 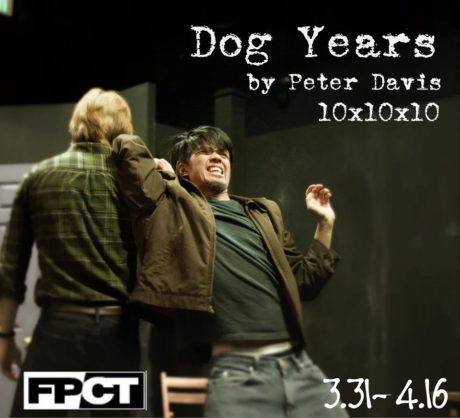 The seventh play, Closing the Door, written by Nicholas Morrison and directed by Kleymeyer, featured Sinn in an impressive black suit\hat combination and red tie, as a Doctor Strange-like impresario of the Afterlife, who counsels Sewell’s character against suicide.

FPCT Board Secretary and playwright Mark Scharf’s Making Time examined contrasting beliefs about how to use the precious years, months, days and minutes of life we all have. Cleverly directed by Peter Davis, Making Time featured Ball and Barroga, both fantastic, who’s characters meet and get into a meaningful conversation at a bus stop.

The last show, Rising Rising, was an absurdist look at what happens when a couple, played by Sinn and Robinson, turn into Mer-people. Directed by Stanley and written by Rich Espey, the premise and tone reminded me of TV-writer\playwright Nick Jones‘s Trevor.

Much credit goes to Charlie Danforth, who designed impressive and apropos lighting for the shows (including the aforementioned projected window). The audience voted for the top three plays via paper ballot. I ranked Addict Named Hal, Making Time and Dog Years the top three. Be sure to see this collection of fine plays and the actors who play them; you’ll be taken on a wondrous 10-minute journey—ten times. 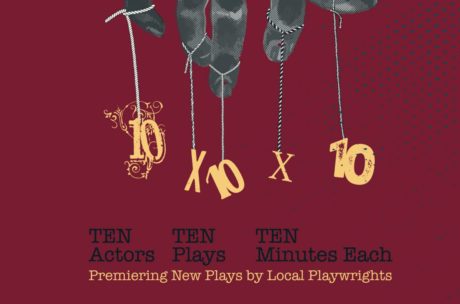