Developed out of a conversation playwright and lead actor Lowell Byers had with his cousin Lou Fowler – a Sergeant in the US Army Air Corps during World War II – upon their first meeting in 2009, Luft Gangster gives a dramatic personal account of the veteran’s thirteen-month ordeal as a POW in a Nazi prison camp. Under the incisive direction of Tony Award-winner Austin Pendleton, the harrowing real-life story, a co-presentation of NyLon Fusion Theatre Company and Cloverleaf Collective, conveys the horrors of war, the human instinct to survive in the most hopeless of circumstances, and the inexplicable arbitrariness of death, while capturing the psychological and emotional states of both the prisoners and their captors.

Set in Nazi-occupied Europe from 1942-45, the production combines slow-paced scenes that evoke the interminable tedium of captivity with shocking episodes of sudden violence and the disoriented hallucinatory visions of the wounded and suffering protagonist.  Authentic passages of dialogue in German, Slovenian, and Italian underscore the difficulty he and his fellow Allied soldiers had in communicating with the Europeans in their native tongues, contributing to their sense of displacement, alienation, and uncertainty. We feel it, along with the cruelty and fear, suspicion and camaraderie, dread and boredom, despair and daring, all embodied with credibility and depth by Byers and an excellent supporting cast.

Seth James as Peter, Noel Joseph Allain as Randall, Sean Hoagland as Joe, Eric T. Miller as Rawlings, and Paul Bomba as the funny and gregarious Vinny all skillfully deliver the distinctive personalities and accents for the British and American troops brought together as prisoners and working together (or is there a Nazi infiltrator among them?) to make their escape. Ralph Byers is chilling as the sadistic RSD Colonel who threatens and torments them, while Gabe Bettio’s Otto and Andy Truschinski’s Werner begin to show glimmers of humanity, as the former shares stories and photos of the family he misses, and the latter gets drunk with the prisoners he’s assigned to watch. Both Truschinski and Bomba bring welcome touches of humor to the hellish narrative. Through it all, Byers’ Lou remains steadfast, giving only his name, rank, and serial number to the German interrogators, while haunted by the memories of his lost family and comrades, and longing to get back home to his girlfriend and future wife Glennie, sweetly portrayed by Casandera M.J. Lollar.

Pendleton uses the entire space of the black box theater, placing the patrolling Nazi guards on the upper-level balcony walkway and thereby surrounding us with the reality of Fowler’s experience. His contrivance of having the dead characters stand up and walk off-stage in an unresponsive zombie-like state only becomes clear as the narrative advances, but the actors’ announcements of the seemingly endless time that has passed for the men in captivity (“two weeks later,” “three hours later”), while they remain in the same place, engaged in the same activities, and having the same conversations, is clever and effective.

Tijana Bjelajac’s simple set design on a small stage elevated on short wooden piers evokes the claustrophobic confinement of the prisoners, supported by Wilburn Bonnell’s lighting, which ranges from general dimness, to spotlights in the darkness, to an unearthly blue glow that illuminates the sequences of dreams and memories. Easily-moved simple wooden chairs represent everything from a hospital bed to the interior of a fighter plane to bunks in the internment camp. While they are a smart time-, space-, and cost-saving device, it is not always immediately evident where the action is taking place (though in most cases that is eventually revealed in the dialogue). Props by Greg Kanyicska, including rifles, a blindfold, and tiny morsels of food, contribute to the mood of uneasiness, terror, and deprivation. Debbi Hobson’s costumes visually define the period and characters, and a superb sound design by Jeanne Travis contrasts the overwhelming noises of war with the popular music and radio broadcasts of the era.

Luft Gangster is presented as part of the Sheen Center’s “’War Is Hell’ Theatre Series.” If you’ve ever had any question about the validity of Civil War General William Tecumseh Sherman’s famous observation, this compelling true story will alleviate any doubts. 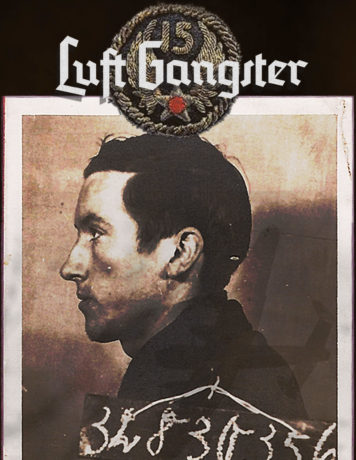 Running Time:  Approximately 1 hour and 40 minutes, with no intermission.