Sometimes it’s easier to let a puppet speak for you, when you know the truth about how you feel will not be well received by your small southern Christian community. That’s exactly what happens in Robert Askins’ outrageously funny and surprisingly poignant Hand to God, a devilish dark comedy now playing at Philadelphia Theatre Company. Is it a case of demonic possession, as they’d like to believe, or simply one shy and sad youth expressing his repressed rage and grief in the only way he can, through the alter ego of an unrestrained and irreverent sock puppet? Matt Pfeiffer directs the riotous X-rated proceedings – filled with foul language, bawdy interactions, and preposterous violence – with a fast and furious hand and a keen eye for both the over-the-top humor and the heartbreaking inner turmoil that drives the show’s no-holds-barred behavior and its underlying message to deal with emotional pain before it turns physical.

PTC’s stellar production features the spot-on casting of five Philadelphia favorites who could not be more perfect for their roles. Lead actor Aubie Merrylees is nothing short of astonishing in his dual characterizations, never missing a beat in his rapid-fire transitions from the vulnerable Jason to the aggressive Tyrone – the puppet he created for an obligatory church event – who seems to have taken on a life of his own. While Jason is devastated by the premature death of his father, unable to communicate with his equally agonized mother, and painfully self-conscious around his peers at the Christian Puppet Ministry, Tyrone wreaks havoc among the God-fearing people of Cypress, Texas, spewing vitriol, engaging in bloody assaults (under the spirited fight direction of J. Alex Cordaro), and monologizing on the human need for religion, the established tenets of “right and wrong,” and the easy excuse that “the devil made me do it.” Merrylees convincingly inhabits both aspects of his character’s personality, changing his voice and demeanor, and masterfully working the puppet to full comic advantage (with expert puppet design and movement direction provided by the acclaimed Robert Smythe), including a flawless rendition of Abbott and Costello’s classic “Who’s on First?” routine.

Each member of the terrific supporting cast is equally adept at delivering the off-color laughs and bringing insight into the minds of the uproarious characters. Grace Gonglewski is a howl as Jason’s confused mother Margery, ineffectual in dealing with their situation, prone to acting out, and making hysterically bad decisions. She is guided at church by the not-so-“good” Pastor Greg, played with laughable earnestness and a not-so-hidden agenda by William Zielinski, until they finally see the light where Jason is concerned. Matteo Scammell turns in an absolutely sidesplitting performance as the bad boy Timothy (adroitly putting the emphasis on both “bad” and “boy”), and Alex Keiper is hilarious as Jessica, who introduces the inexperienced protagonist to the wanton pleasures of puppet sex.

The top-notch acting and direction are enhanced by a first-rate artistic design. Costumes by Alison Roberts are contemporary and believable. Daniel Perelstein’s original compositions for organ cleverly evoke the sounds of both traditional church music and old-fashioned horror films, in keeping with the shifting tone of the set by Brian Sidney Bembridge and lighting by Thom Weaver, which amusingly transform from devout to infernal, as Tyrone exerts his increasing hold on Jason.

If you want to see a show that is wildly entertaining, unexpectedly touching, and resoundingly award-worthy in every single category, PTC’s Hand to God is the one, so get your f*&#ing a%$ over to the Suzanne Roberts Theatre now! 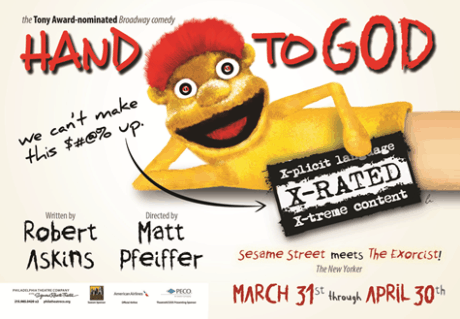 Hand to God plays through Sunday, April 30, 2017, at Philadelphia Theatre Company, performing at the Suzanne Roberts Theatre – 430 South Broad Street, Philadelphia, PA. For tickets, call the box office at (215) 985-0420, or purchase them online.