Based on a charming French film, Amélie the musical begins with a narrator letting us know we’re going to be in Paris and its surroundings for the next 90 minutes, and as he and the music box music that accompanies him is pleasant enough, I sit back to relax. A moment later we meet a sprightly teenaged Amélie, nicely dressed in long cotton stockings, a plaid skirt and whatever else was de rigeur for a Parisian high school student in 1975.

An actress with the distinctive name of Savvy Crawford plays her with the right amount of sassy, seductive energy that is appealing. The scenery and costumes designed by David Zinn made it clear we were not to take any of this too seriously, for the sets were the sort a child might have put together with a box full of cutouts with easel backs that allowed them to stand on their own. Funny hats, heavy beards, cartoony hairdos, and a company of actors appeared constantly and quickly to populate this very light tale of ‘whatever happened to Amélie?’.

What happened was that fifteen minutes of playing time later it was 1997 and she had turned into the adorable Phillipa Soo, who is fast becoming THE musical theater leading lady, having spent recent seasons on Broadway in hits such as Hamilton and Natasha, Pierre and the Great Comet of 1812. Ms. Soo is pert, pretty, has some of the same qualities as a young Mary Martin, Tammy Grimes and Debbie Reynolds.

What she doesn’t have is the authentic gamine Frenchness of Leslie Caron’s Gigi, and she isn’t in this instance supported by music, lyrics or book of any particularly Gallic style. Yes, we are in Paris, and yes her character is a free spirit who would rather remain on her own than attach herself to just any fellow, but though the actress is most appealing, the character Amélie is not. And the lad she chooses not to touch her until the final curtain, though nicely played by Adam Chanler-Berat, is not the winner to whom we’d hoped she’d become attracted.

Irma La Douce and Gigi are two musicals from the past that have also concerned themselves with a Parisienne, a young lady of considerable charm who lived outside the conventions of society. In Gigi we had the pleasure of watching her leave the cocoon in which she was taught the manners of a courtesan, to blossom into a beautiful butterfly capable of attracting the dashing Gaston, the man of her dreams.

In Irma we found a gamine who made her living working for a mec (a pimp) until poor law student Nestor le Fripe came along to claim and win her. Both ladies were made irresistible to the audience by the melodies supplied by Frederick Loewe and Marguerite Monnot respectively and the witty lyrics of Alan Lerner and the team of Julian More, David Heneker and Monty Norman, who adapted them from the French of Alexandre Breffort. Amélie must make do with the bland and serviceable score of Daniel Messé, and Nathan Tysen.

Direction by Pam MacKinnon at top-notch speed is helpful in keeping the one-act 90 minute musical alive, but its breathless pace only made me feel it was staged that way to prevent us from dwelling on the plot, for that spends most of its time on the many ways in which Amélie avoids any form of intimacy with Nico, the fellow who falls for her and keeps popping up wherever she turns.

Phillipa Soo is a refreshing presence on stage, but in this production, currently at the Walter Kerr Theatre, no attempt has been made to season her performance or any of the others with a sense of place. There are 25 musical numbers, titled in the program but not identified with the characters who sing them. Also, in what seems like a new method of listing cast members alphabetically instead of in the traditional manner of “in order of appearance”, it makes it difficult to identify who played Dufayel, Suzanne, Lucien, Raphael, Armandine, Joseph, Adrien, or Belgian Tourist, among others. One hearing is not enough for me to know who sang “Halfway”, “Backyard”, “The Commute”, “Window Seat”, “Thin Air”, “Three Figs”, and others whose titles don’t remind us what they are about or who sang them. Change in format can be good; but not at the expense of clarity and helpfulness, which it seems to me is the whole point of printing a program. I thought I’d mention this before it becomes a habit, for this is not the first musical to print song titles with no character attached, with alphabetically listed actors. This is not helpful.

There is nothing “wrong” with Amélie the Musical. It just never soars. It never involves us, never really surprises. Kimberly Grigsby’s music direction is fine, but you can’t make magic with generic material, so I don’t foresee much humming the music or quoting the lyrics of this score in the future. Still, it’s all very pleasant and it has a cast that is playing it at full tilt. 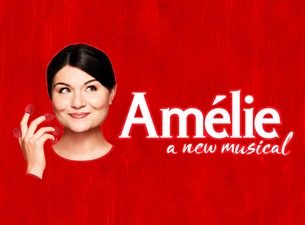