A Bright New Boise by Samuel D. Hunter lit up the floorboards at Silver Spring Stage on Friday, April 7, 2017. Produced by Andrea Spitz and directed by Matt Ripa, some will find it a comedy with a message, others an introspective look at religion in the heartlands of America, with a touch of humor.

The play takes place almost in its entirety in the employee lounge of a Hobby Lobby Craft Store in Boise, Idaho. Hunter uses the Hobby Lobby in a symbolic way to let us know that this will be a story about religious beliefs, as the store has become a test case for the rights of a company to run its business based on the religious dogma of its owners. It also is one that deals with the rights of business vs. the rights of employees. Hobby Lobby is also very anti-union, closing stores when workers tried to unionize. The manager of this particular retail establishment, Pauline (Andrea Spitz), relates how she saved the store by working hard and being tough with her employees, but with compassion (Note: everyone is called by their first name, so no last names).

A new applicant has been hired, a man named Will (Brendan Murray).  He is from another part of Idaho, and although Pauline is a Christian, Will is much more evangelical. It turns out he worked for a non-denominational church with a dark and mysterious reputation. He has come to Boise, to this store, to meet his long-lost son, who was given up for adoption at birth, Alex (Ben Miller). Alex is in high school now and works part-time in the store along with his foster brother, Leroy (Shaquille Stewart). Both Alex and Leroy question religion, and during the play question Will’s beliefs, especially the belief that the Rapture (when good, God-fearing Christians will be swept into heaven, while the rest burn and so will the earth as we know it) will soon come.  Adding to the mix is Anna (Maura Suilebhan), a sweet woman who develops a friendship with Will. They both sneak back into the lounge after closing, Anna to read and Will to write a religious novel on the Internet.

Murray does a marvelous job making Will both likable and, yet, almost maniacal in his fervor about the Rapture and his faith.  We applaud his wanting to know his son, but become aware that he has not thought out how this will affect Alex. As his friendship with Anna evolves, we see how inflexible he is despite living with the horror that his church inflicted.  However, through him, we come to understand why this man leads a mundane life devoid of dreams, success, and love. He turns to this promise of reward in the afterlife for his unquestioning faith.

Miller’s Alex is a sensitive portrait of a vulnerable young man, plagued with all the normal problems of being a teen and with the added problems of bad foster parents, feeling abandoned by his biological parents, losing friendships, and being very creative. His scenes when he is a high schooler with panic attacks are very realistic and moving.

Spitz presents Pauline as both humorous and compassionate.  She has brought order to the store and her life. She balances her beliefs with the real world, stating her belief in Christ followed by a stream of expletives.  Spitz gives us a Pauline who can, in one minute fire someone, and in the next let him off with barely a warning.  She is the queen bee of this Hobby Lobby.

At first Stewart’s Leroy seems to be just a rebellious young man, but he has real compassion for his foster brother. When he pulls Alex out of a panic attack, we see this warmth.  He also creates a smart and savvy character who is willing to stand up to Will and Pauline. Stewart also wears some really profane tee shirts but, somehow, carries this off without offending the viewer.

In contrast Suilebhan’s Anna is a more sensitive and timid creature.  However, she has learned to compartmentalize her life. She reads in the store because she can’t read at home. She loses jobs, but goes on to the next store. She blends so well into the backgrounds, no one notices her when she waits in the store for closing so she can read in private. She goes to church, but even that is just one part of her life and does not dominate it.  She is lonely and shy but reaches out to Will. Her kindness to Will emphasizes the newcomer’s lack of empathy to her.

The direction by Ripa is concise. Ripa does create the literary illusions Hunter had in his script and although these are really just banal, ordinary people, we are thoroughly engrossed in their lives. Using the audience aisles for scenes outside the store are a fine idea, but from where I sat I had trouble seeing the actors at times, and it was a bit physically uncomfortable to watch on the longer scenes.

Dean Leong was Scenic Designer and Master Carpenter.  His black and white floor contrasts well to the shades of gray in the theme of this play.   If you ever were in an employee lounge of a retail store, you know they are drab and utilitarian, and Leong’s set captures that feeling.

Katherine Offutt’s lighting design also helps create the glare of the lounge and yet, often the dreariness of this place.

Costume credits go to Julie Cray Leong. Her tee shirts for Leroy and his wonderful hat brought humor to the play as well as making us understand the character.

A Bright New Boise has received several accolades including an Obie for Playwriting. Hunter tried to explain the play in an interview with PBS this way: “As secular humanists in this country, our initial reaction is just to say that fundamentalists believe because they are either dumb or crazy…. I am interested in a more honest look at how these people live with their beliefs and how their beliefs affect how they live.” This production lets us look at these ordinary folks with understanding rather than contempt.

For a very special look at a part of the American culture that you might never come across in your own lives, get over to Silver Spring Stage to see this thoughtful but entertaining production of A Bright New Boise. 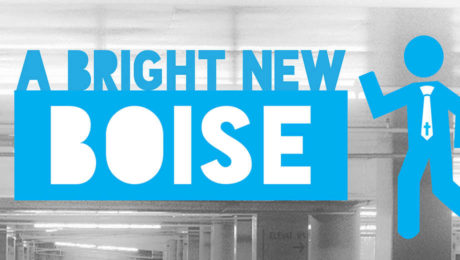