Currently performing the titular role in EgoPo Classic Theater’s Anna – an adaptation of Leo Tolstoy’s Russian epic Anna Karenina, written and directed by Brenna Geffers – Colleen Corcoran has become a regular in the company’s original ensemble-devised productions, based on re-envisioning the masters for a 21st-century audience. In addition to her power to command the stage with compelling acting and a deep emotional commitment to her characters, Corcoran has a background in dance and sketch comedy, which she incorporates into her fully three-dimensional performances.

I spoke with Colleen after attending a Sunday matinee of the critically-acclaimed Barrymore-recommended Anna, to discuss her creative process, her view of Tolstoy’s themes and protagonist, and the type of work and roles that are of special interest to her.

Deb: Tell us about the background behind your role in Anna.

Colleen: I had worked with Brenna in EgoPo’s previous productions of The Lady from the Sea in 2014, The Hairy Ape in 2015, and Machinal in 2016, and also on the Philadelphia Opera Collective’s La Ronde in the 2015 Philadelphia Fringe Festival. In September 2016, we took The Hairy Ape to the Provincetown Tennessee Williams Festival in Massachusetts. She told me that year that she would be doing Anna in the next season, for EgoPo’s “Russian Masters Festival.” We met in November for a five-day workshop with the whole ensemble, but no roles were given at that time. Brenna would come in with pages she had written, and then we would make contributions, like devising the soundscape for the piece – in this case, the abstract sound of our breath for the train. No one went in with a specific character or lines, we would just go in to create what she needed, to figure it out organically, to decide what to use and where to go from there.

When did you know that you would play the lead?

I didn’t find out Brenna wanted me to play Anna till late January. We didn’t have the finalized script yet, we worked on it collaboratively, which is why the byline in the program says “Brenna Geffers and the Anna Ensemble.” It truly was a collaboration, and she wanted to give credit to everyone involved. She’s very generous in her appreciation of the contributions of the entire cast in developing the characters and the show.

How did the creative process evolve, once the characters were assigned to the actors?

I did a lot of table work with Brenna and Andrew [Carroll, who plays Anna’s lover Count Vronsky]. The original script was approximately three hours long (Tolstoy’s book is about 800 pages), then she did a more condensed version. The time we spent was all about establishing relationships, so the waiting was important for us to understand the characters and to come together as an ensemble; we talked about building relationships without doing scenes. K.O. DelMarcelle was brought in to choreograph the dances, which gave a good indication of who the characters were and how they related to each other. Several rewrites were abandoned, and then after the presidential election, Brenna ripped up the original script and started over; she felt she had to do something different with the adaptation because of the current political climate in the US. So the script eventually went through three drafts. The first was read by the cast, but the next version was not. For the second draft, she brought others in to read it, so the cast could listen; it was very useful for us to hear how it sounded. There were no problems with it, but post-election, Brenna wanted to make a stronger statement that would resonate now. She didn’t forsake the story, but condensed it to an hour and 45 minutes, getting to the essence and making it clear that it’s not just a romance, it’s not all about Anna, it’s about so much more. So she gave more focus to the socio-political issues of class and the treatment of women that Tolstoy addressed, which are still relevant today.

Tell us about your approach to Anna, in terms of how you developed her character and your performance.

You have to own the moment, or no one will believe it. Brenna gave me a lot of freedom to develop my work. After our rehearsals, I would go home and run lines with my dog, which was great, because I got real reactions to the emotions I was trying to convey, and I could tell when I captured them! Then I would bring my ideas in to Brenna at the next rehearsal. For me, everything was about scaling back for this role, especially in the first act; letting the words speak, trusting the director and the ensemble, then letting loose with emotions in the second act, so it would be more effective and explosive when she finally did express how she felt.

What is your view of the character and your interpretation of the play in general?

Ooohhh, I find her extremely relatable, in terms of her being a certain type of woman. Anna plays the part of a wife very well, until she meets a guy who completely throws her off. She tries not to succumb to her desires, but she becomes enlightened to the fact that she has the right to be loved and to be happy, so she gives in. I don’t agree with everything, but I have to find a way to tap into her sadness. It wasn’t until the moment she felt what it was like to be loved that she understood the depth of how sad she was just living her life, doing her duty. When she traveled through Europe with her lover, to Paris, Rome, Vienna, she was free and happy for the first time in her life. But then her free-spirited bohemian love turns into the same man as her husband, and she has nowhere to go. That’s why she throws herself in front of a train; she has no place in this world anymore. When others warned her about what she was doing, she didn’t want to hear it, she wanted to enjoy the moment, it was so important to her. It’s not that she wasn’t aware; she just wanted a little more time to be happy. It’s the first time she had a choice, so it’s simultaneously terrifying and magical. I had to fall in love with this woman to understand her. I care about her, and I want to make the audience understand and care about her too.

What is it about the work EgoPo does that keeps you returning?

Classical theater with abstract movement is a niche I never knew I needed. I danced for twelve years and did sketch comedy for eight years, so to go back to classical theater, to perform physically and vocally with groups of talented people, is everything to me. And Brenna is the most incredible director I’ve ever worked with. She trusts her actors and believes in an ensemble to create a cohesive piece; it’s very rare. We have a completely open process, in which anyone in the ensemble is able to pose a “public question,” “public suggestion,” or “public idea.” Brenna is open to it at any time, so everyone gets attention. It serves our group very well; it’s completely collaborative. Suggestions are always welcome and open for discussion. We give all the ideas a try, and there’s never any negativity; no recommendations are shut down or dismissed. That gives us more confidence to put forth a suggestion and, as a result, it creates trust. There are a lot of happy accidents in the room. I’ve had that experience in sketch comedy, but never before with a full-length production.

Why is it important to perform and to preserve the classics?

They’re timeless. They can be done in any period and they’ll still be relevant. Beyond being universal, the themes are very personal.

Then why do adaptations?

Making the classics accessible is even more relevant. We did matinees for local high school students, followed by a talkback, and these kids were so involved in the story and how we devised it. They asked extremely eloquent questions about our creative process. In general, throughout the run, our audiences have commented on how clear and cohesive the narrative is, and how it made them want to go back to re-read the book, or in some cases, to read it for the first time. And everyone has loved the way the piece moves, it’s so fluid.

Is there a specific message you hope audiences will take away from Anna?

I want people to be reminded that we’re still reliving these same themes, that these issues are still relevant.

What’s your favorite role to date?

The opportunity to do Anna has meant the world to me, to play such an iconic role. It’s my favorite by far! When I got the part, I dropped everything to focus on it; I didn’t take anything for granted. I read Tolstoy’s novel when I was in grade school, but reinventing this character now, after living as an adult, makes so much more sense than it did when I was younger. It’s so much more substantive to me now.

Do you have any dream roles that you haven’t yet played?

I would love to do Death of a Maiden by Ariel Dorfman; it’s very political, about the crimes of a violent dictatorship and one woman’s attempt at vigilante justice in the new democracy. I workshopped it in college and I’ve always wanted to perform it in a full-stage production.

What do you have scheduled after you close Anna?

Brenna was invited back to the Provincetown Tennessee Williams Festival again this September, so we’re developing Pericles with the ensemble. We had an amazing experience there last year with The Hairy Ape, so I’m very excited about returning. And I’m also excited about doing a reading in Philadelphia of Civil Blood by Erik Ransom. He wrote a part in it specifically for me, Princess Catalina of Castile, which I read in New York and am looking forward to bringing here.

Many thanks, Colleen, for sharing your experiences and your insight into Anna. We look forward to seeing you again in your upcoming shows! 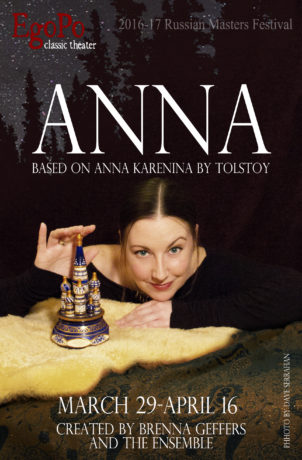