Family plays have changed so in the past few decades. They once concerned themselves with sibling rivalry for power and control (The Little Foxes), long held lies that are finally unearthed (All My Sons, Long Days Journey Into Night), the tragedy of lost connection between fathers and sons (Death of a Salesman), and many more.

Then there were the comedies about happy families, who were always loyal, faithful, supportive — Ah, Wilderness, Kiss and Tell, You Can’t Take It With You, et al. And of course the romantic comedies, the clever ones, enjoyed long runs followed by longer road tours. Barefoot In The Park, Mary, Mary, and The Voice of the Turtle come to mind. Dramas dealing with then-current as well as past issues showed up every season and plays like Dead End, There Shall Be No Night, Darkness At Noon, filled theatres profitably in long runs.

There are now many areas that are new to us all, and one of them is the ongoing discussions of gay life in all its permutations, and specifically of the ‘out of the closet’ attitudes that have become more mainstream with each passing season. So what has been reported as the private life behavior of at least 10% of the world’s population is now being dramatically examined off and on Broadway with more and more frequency.

Daniel’s Husband by Michael McKeever, now playing at the small Cherry Lane Theatre in Greenwich Village, deals with one particular area of gay life. Two men, Daniel Bixby and Mitchell Howard, living together harmoniously and in great comfort for several years, have healthy relationships with friends like book agent Barry Dylon and his young boyfriend Trip. Daniel’s mother Lydia Bixby, who lives in another town, has great need to be closer to her son; but she has totally accepted who he is and has always tried to be cordial to his mate.

The only adjustment this couple has not yet achieved is over the issue of marriage. Daniel craves it, and Mitchell abhors even the idea of it, though both believe in monogamy and long term commitment. Both viewpoints on marriage are clearly and eloquently presented by Mr. McKeever. There are also marvelously interesting conversations about the agent Barry’s choice to move from one romance to another. And Mrs. Bixby, in one of her visits, reveals her acceptance of her son’s choice of a partner, even claiming that a gay son is a blessing for a mother who loves him, for very convincing reasons.

When a sudden and frightening incident changes everything mid-way through the ninety minute one-act pay, the plot thickens and the temperature rises so that what began as an entertaining look at a happy home, evolves into a searing drama which forces us as audience to form our own opinions, to choose how we hope the situation will resolve itself.

The cast of five excellent actors spins out Mr. McKeever’s intricate and organic dialog so that we are always on the alert because it is full of surprises, all of which stem from truth.

The one set, the apartment in which the two men live, is designed by Brian Prather. It is described as “the main room of Daniel and Mitchell’s perfectly appointed home. Today.” It delivers, and serves the play well.

Divided into several blackout scenes, the play covers several months before and after the incident that changes everything, and I found it totally absorbing, cumulatively very moving, and ultimately thought provoking. I can’t ask for more from a play, and I’d like now to read it, to become more familiar with some of its arguments, to spend more time with these people, all of whom are appealing in one way or another.

Matthew Montelongo and Ryan Spahn, both of whom have excellent theater backgrounds, are instantly recognizable as human beings who are fortunate to have found each other and wise enough to be grateful for that. Anna Holbrook as Daniel’s mother is an attractive woman whose intelligence and fierce commitment to Daniel appear like energy spent more on satisfying some desperate need of her own rather than serving the best interests of her son. But as written and as played by Ms. Holbrook her actions become more and more understandable; she is a worthy adversary, able to lock horns with her “son-in-law,” the equally committed man who insists on his right to remain in charge of his own life and the one he shares with his partner.

Joe Brancato’s direction is fluid and tight, so that all viewpoints are expressed with fervor, even passion by the different characters. Sparks fly, dramatic conflict runs rampant and it all adds up to a powerful 90 minutes of live theatre, one which should appeal to anyone interested in sharing a time of crisis with a family of accurately drawn people. 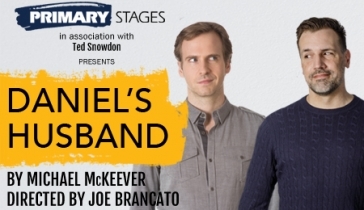