In her announcement Publisher and Editor of DCTheatreScene Lorraine Treanor wrote:

Joel Markowitz is a man passionately in love with theatre, its audiences and its artists. He has played a major role in the DC area theatre scene for more than 25 years. He founded the Ushers Theatre Group, played a crucial early role in DC Theatre Scene, and Maryland Theatre Guide, and founded and currently serves as publisher and editor of DC Metro Theater Arts.

On Monday, May 1, 2017, he will receive a special lifetime Gary Maker Award in a honor of his work at MetroStage in Alexandria, VA.

Markowitz’s award will be the finale of a gala cabaret hosted by MetroStage and organized by MetroStage Artistic Director Carolyn Griffin. Michael J. Bobbitt will be master of ceremonies; the entertainers have yet to be announced. Afterward, MetroStage will host a reception in the lobby, giving audiences a chance to visit with Joel. 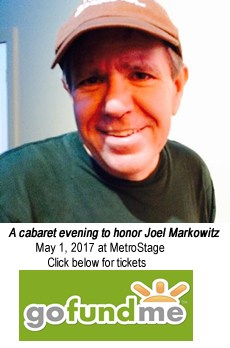 Tickets to A Cabaret in Honor of Joel Markowitz are Pay What You Wish and available here.

Recently, Joel announced that he has Amyotrophic Lateral Sclerosis (ALS), a very serious illness, characterized by the death of neurons which control voluntary muscles. A GoFundMe campaign is underway to raise money for the considerable medical expenses he is facing.