The Arlington Players have put on a delicious production of the musical She Loves Me. The 1964 musical by Fiddler on the Roof Composer Jerry Bock and Lyricist Sheldon Harnick and book writer Joe Masteroff was not a roaring success when it first premiered on Broadway (it had the bad luck of opening the same season as Broadway smash Hello, Dolly!). However, it has since become regarded as a classic in musical theatre, thanks to its two successful Broadway revivals. Yet, it’s also a show that you don’t see many theatres do. As a huge fan of the show, I always try to seek out productions of it. I’m pleased to say that TAP has done it justice.

She Loves Me is an adaptation of Miklos Laszlo’s Parfumerie, which has also been the source for many other movies and shows (the Tom Hanks-Meg Ryan comedy You’ve Got Mail, for example). In 1930s Budapest, Amalia Balash and Georg Nowack work at Maraczek’s Parfumerie and cannot stand each other. However, both have been sending secret love letters to their “Dear Friend.” Their “Dear Friend” turns out to be each other…..you’ve seen this before, right? Yes, the plot is formulaic, but the show’s colorful cast of characters, gorgeous score, and cheerful tone give the show weight and is a constant delight.

Georg and Amalia are played by Sam Nystrom and Jolene Vettese with great charm and find the perfect notes. One of the things I’ve always liked about this show is how likable the characters are. We WANT them to be together and find their squabbling humorous. Nystrom and Vettese are funny in their bickering, yet also quite sincere in their need to meet “Dear Friend.” Vettese has two ballads in Act One (“Will He Like Me and the Act One closer “Dear Friend) that she sings beautifully and sweetly, and she nails the show favorite “Vanilla Ice Cream.”

There is another “couple” that works at the Parfumerie: Ilona Ritter and Steven Kodaly. Ilona is a 30-something put upon with terrible luck with men, while Kodaly is suave and smarmy. Mikel Rios gets many laughs as Ilona and Taylor Witt is equal parts dashing and cool as Kodaly. Jack Stein plays middle-aged schmuck and coworker Sipos with great comic chops. 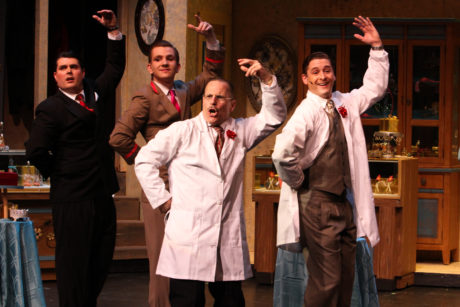 A small part that always gets big laughs is the Headwaiter, played by Chuck Dluhy. Nothing can go right for this disgruntled waiter and his song “A Romantic Atmosphere” brings down the house. Dluhy is on stage for maybe 15 minutes total and gets probably the biggest laughs of the night.

Director Michael Kharfen does nice work with the scenes and choreographer Cathy Oh has some lively choreography. Sometimes the choreography sometimes felt out of place and distracting. For example, I didn’t feel the need for street people to be dancing in the background for the opening song, which is supposed to only focus on the 4 characters singing.

Scott Richards did a fine job musical directing. It’s a hard score to sing and play, and the fine musicians and castdid a great job playing and singing the score.

Skip Gresko designed the set and with its nice pointed backdrop of the city and the detailed exterior of Maraczeck’s shop, it was really well constructed and looked beautiful. Ken and Patti Crowley designed the romantic lights. The sexy period costuming was by Joan Lawrence.

She Loves Me is a delightful treat (like…Vanilla Ice Cream?) that will bring out the romantic in you. Stop by Maraczeck’s store and see The Arlington Players’ entertaining She Loves Me.

She Loves Me plays through April 30, 2017, at The Arlington Players. performing at Thomas Jefferson Community Theatre – 125 South Glebe Road, in Arlington, VA. For tickets, by them at the door, or purchase them online.