On Saturday, I attended the inaugural production in the newest post-renovation Baltimore Center Stage (“BCS”) performance space – the descriptively-named Third Space. BCS chose a play with its own impressive pedigree of “firsts” to debut in their brand-spankin’-new 99-seat black box theater: That Face.

That Face was the first play written by precocious playwright Polly Stenham; she was only 19 years old when she wrote it and 21 when the show was originally produced at London’s Royal Court Theater in 2007. Amid a torrent of awards and accolades, That Face was quickly moved to the West End, making Stenham the youngest playwright to have England’s equivalent of a Broadway production since the 1960s.

BCS’s Third Space, home to some of their expanded “Off Center” programming, is a “highly flexible and intimate space… designed to be a place for bold, adventurous work.” It is intended to allow BCS to “showcase progressive voices and fresh initiatives—with shorter runs and more accessible ticket prices—that might not reach our main stages.”

That Face is squarely “off center.” It begins with a harrowing scene of the boarding school hazing of 13-year-old Alice (a longsuffering Madison Fae) at the hands of sociopathic schoolmates, Izzy (an icy Sarah Nicole Deaver) and Mia (Emily Juliette Murphy) and it doesn’t really get easier to watch after that. Mia gets sent home from school for her participation in the incident and we see how her home life, in comparison, makes that boarding school look like a sane and stable place for the teenager to be.

In her portrayal of Mia, Emily Juliette Murphy accomplishes what, at first, might seem like an impossible task. She takes a distasteful rich kid whose bullying lands a classmate in the hospital and, through a skilled and nuanced performance, converts her into a legitimately sympathetic character. Murphy’s Mia does not ask for our forgiveness; she reveals herself as a vulnerable yet strong young woman forced to cope beyond her years.

If Blanche DuBois from A Streetcar Named Desire and Martha from Who’s Afraid of Virginia Woolf? had a love child, that child would be Mia’s mother, Martha. Boldly performed by Leenya Rideout, Martha is like a giant, Dorothy-Gale-style tornado that has sucked up Arkham Asylum and is raining danger and craziness down on anyone unlucky enough to be caught in her gravity. Rideout’s performance exudes that level of urgency and power, of forcefulness and fragility. From her indifference to daughter, Mia, to her bitterness toward ex-husband, Hugh (Patrick Boll), to her creeptastically too-close relationship with her son, Henry (Josh Tobin), Rideout’s Martha is a beautiful disaster.

Josh Tobin, last seen at BCS in a somewhat lighter dramatic comedy, Amy Herzog’s 4,000 Miles, is great as the object of Martha’s affections, Henry. The Oedipal relationship with his mom is only a part of the trainwreck that is Henry, though. Tobin eschews the lazy route of making it all about incest, instead portraying a fundamentally kind, talented 18-year-old who has spent the entirety of his teen years hobbled by having to be “the man” of a seriously dysfunctional family. His is a complex, commanding performance.

BCS, the State Theater of Maryland, has been pulling out all the stops to showcase their building and all the new programming the recently-completed renovations have made possible. That Face, in addition to having an excellent cast of veteran Broadway and Off-Broadway actors, employed a Who’s Who of Baltimore in their creative team. Johanna Gruenhut, whose impressive credits include her current gig as an Artistic Associate at Everyman Theatre, directed That Face with impressive sensitivity. Dealing with art involving mental health issues can be very challenging, but Gruenhut and her Assistant Director Jack Dee hit the right balance of wit and warmth to make the show accessible despite its often cringe-worthy content.

Ryan Michael Haase, the intrepid Artistic Director and Founding Member of Stillpointe Theatre Initiative, served as Scenic Designer for That Face. His solutions for designing for a small space that will be viewed from all sides display his ingenuity and cleverness. My favorite of Haase’s set creations was the bed that dominated most scenes. It was on wheels, which made it easy to angle so all could see, and the mattress was atop a shelf that ran the entire length and width of the bed. Virtually all the props resided somewhere on that shelf, which made them handy when needed and out of the way when they were not.

That Face is not for the faint of heart. But if you like your comedy pitch-black or you want to see what won this show three Olivier Award nominations; the number nine spot in The Times’ “Top Twenty Plays of the Decade;” and prompted publications from The Guardian to Time Out: London to christen Stenham the Tennessee Williams or Edward Albee of a new generation… well, you should go. And go fast. There are only six performance left before the curtain falls on That Face at Baltimore Center Stage this coming weekend. 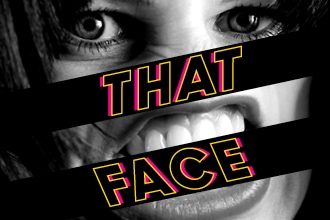 Advisory from Baltimore Center Stage: This dark play contains adult language and content, simulated drug use, hazing, and sexual situations. It is not suitable for young children. This performance includes the smoking of herbal cigarettes in a small performance space.