Nicole: Much like you, your Sappy Songs are extremely eclectic! You do everything from Stephen Sondheim to a Scottish ballad to Billy Joel to Miley Cyrus. How do you decide what to include in your “sappy” repertoire?

Is that where the word “sappy” comes in?

Well, I say sappy because I want to give the audience a hint of what is in store, which is that these songs are emotional but there is also humor in the show as well!

In between songs you tell some really intimate and humorous stories from your own life. You aren’t performing as a character on that stage; you are being yourself. Is that liberating? Terrifying? Both?

Well… both. But initially it’s terrifying because when you haven’t done a cabaret show before it’s a very different thing to just stand up and be you instead of having a character between you and the audience.

That’s why I took so long to do it. I did another cabaret show before this one (I Bought a Blue Car Today, 2009) that I toured a little bit. But I didn’t do that until I was in my late 40s so I have this new career developing late in life. Partly because it’s a big leap to make. I wasn’t ready to do cabaret when I was younger and now I am. I like to think that having more life experience, I’ve got more to say now which makes for a better show.

How do you go about listening to well-known songs and reinterpreting them?

Well, you just open your heart and take your judgmental hat off and then you can listen to the lyrics to the song and hear what it’s actually about. You have to leave the snark outside!

Can I mention the cover photo of your Sappy Songs album? It’s a sensual and compelling photograph but one that I had to hide from my kids! How did that photo come about? 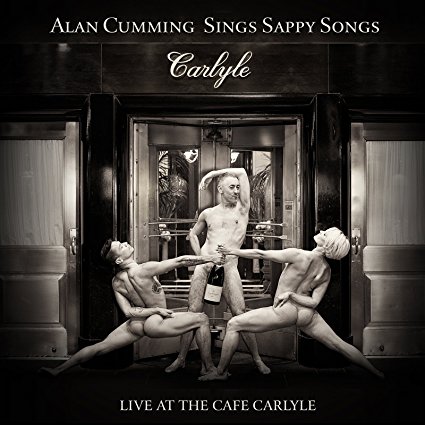 Ha! That was taken by a photographer named Jordan Matter who specializes in photographing dancers. He was doing this thing called Dancers After Dark in which he photographed naked dancers around New York City. He asked me to do a shoot and of course I was so flattered. I was doing this show at the Cafe Carlyle at the time so he came over.

My manager had just sent me this rather large bottle of champagne to congratulate me on hosting the Tony Awards. Jordan saw the champagne and got the idea for the photo. It was two in the morning at this point but he madly called around and got two dancers to come pose with me and we just ran outside, took our clothes off and snapped the picture!

I liked it so much that when it came time to record the album for my cabaret show, I recorded it at the Cafe Carlyle in NYC just so I could use that picture as my album cover.

Yeah, we are very excited!

What can people expect from that?