The characters in the oldie and much appreciated allegorical goodie The Fantasticks (The off-Broadway incarnation ran for 42 years, and it is reportedly the World’s most performed musical) find out that life is a series of hard lessons, taught through the passage of seasons. With lyrics and book by Tom Jones and music by Harvey Schmidt, and as directed by Chesapeake Shakespeare Company’s (CSC) Curt L. Tofteland, The Fantasticks is a dazzling night of musical theater.

A romantic musical, The Fantasticks, is about a boy and a girl in love, and the efforts of their fathers to keep them apart using everything from reverse psychology to a physical wall to separate them. As Tofteland described the show, it “carries us on a journey of imagination into the world of moonlight, magic, memory, and an infinite love that transcends over time.”

The show soars to lyrical heights due to the charming-voiced Gerrad Alex Taylor, who plays El Gallo, part magician, part salesman, part ladies man and all swaggering narrator of the imaginative tale. Taylor’s superior vocals fueled the most well-known of the musical numbers, “Try to Remember (that night in September). The song set the tale on a whimsical footing, and on a path from a proverbial September to December. Taylor also stood out in “It Depends on What You Pay” and “I Can See It.”

Matt, played by Rafael Sebastian, used his wonderful voice to uplift songs such as “Metaphor” and “Soon It’s Gonna Rain”; he had a good solo in “This Plum Is Too Ripe”. Sebastian’s Matt, a lovelorn 20-year-old, much like Shakespeare’s Romeo, pined for 16-year-old Luisa, well played by Roxanne Daneman. Daneman not only sang well in numbers like “Much More” and “They Were You”, she also exhibited wonderful dance moves with Taylor’s Gallo.

Delightful does not adequately describe the rapport, chemistry, and outright jubilation brought on by Gregory Burgess (recently seen in CSC’s Richard III) and Steven Hoochuck, who played actors-for-hire Henry and Mortimer. Tasked by Gallo with “abducting” Luisa, these two characters were the funniest con men since Mark Twain’s King and the Duke. They excelled vocally in  “Abduction Ballet,” along with the Company.

What fun I had watching the squabbling pair of controlling fathers, Hucklebee (Matt’s father), played by Lyle Blake Smythers and Bellomy (Luisa’s father), played by David Tabish. From Hucklebee’s brash insults of his son to Bellomy’s advice on gardening to their teaming up on numbers like “Never Say No”, Smythers and Tabish were wonderful to watch. Robby Rose rounded out the cast as the Mute, who caught several objects thrown at him from the stage, and portrayed of all things, the wall between households Hucklebee and Bellomy.

A spectacular musical foundation was built by Music Director Scott Farquhar, the piano of Belinda Chen and harpist Laura Stokes. Dance Choreographer Nellie K. Glover ensured the loveliness of Gallo and Luisa’s dance. Costume Designer Kristina Lambdin deserves the highest of marks for the black cape and red sash she put on Taylor’s Gallo. The wooden-sword-fights, by Fight Choreographer Chris Niebling, satisfied my taste for action. Set Designer Chester Stacy made good use of CSC’s three-quarter thrust stage, adhering to the adage “less is more.”

Chesapeake Shakespeare Company’s The Fantasticks is full of meaningful performances and classic songs, and due to its superior directing and performances, a jubilant triumph of musical merrymaking.

Running Time:  Two hours and 15 minutes, with a 15-minute intermission. 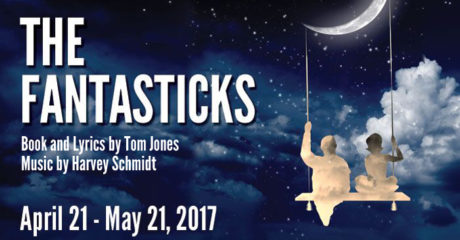