The Lost City of Z is a throwback adventure story. Based on the book of the same name by David Grann, the film follows Percy Fawcett at the tail end of the era of grand discoveries, when it was still possible for a handful of people to stumble around in the jungle and discover something incredible, only to find they are unable to convince the world it happened once – if – they come back.

The Lost City of Z is the latest from James Gray, director of The Immigrant and We Own the Night. Charlie Hunnam plays Fawcett, a British soldier yearning for more than training militia in Ireland when he gets assigned the utterly unenviable task of surveying the border between Bolivia and Brazil back when you could pretend with a straight face that Britain was a disinterested observer and surveying was one of the more exotic ways to meet your Maker, if you believed in such things.

Fawcett leaves his adoring and talented wife, Nina, played as well as she can by Sienna Miller, given that the poor wife gets to make all the motions about being as capable as her husband without ever getting to prove it, just as she discovers that she is pregnant with their second child. There’s something deliciously appropriate that Fawcett travels coach on the long trip to the heart of Amazonia only stumbling upon his (drunk) aide-de-camp, Henry Costin, played with a devastating dry wit by Robert Pattinson (yes, that one), a week in, a grubby beginning to such a grand mission. What Fawcett and his men (all men) discover leads to a lifelong obsession with a stunningly beautiful and incredibly dangerous place. The epic and the personal exist in an uneasy tension in The Lost City of Z, a film that explores the tedium inside sweeping journeys in time and space.

In many ways, The Lost City of Z is a film that is exquisitely of this moment. During Fawcett’s first trip into the Amazon, he and his men pick up their first native guide from the cruel master of a rubber plantation. He agrees to help Percy because the rubber baron recognizes that Percy’s journey of exploration will have the side benefit of assuring that nothing will change for him, even as this slumlord recognizes Percy’s condescension and disdain for the way natives are treated on his land. “I will help you because you will make sure that nothing will change,” he says in one chilling moment.

More than anyone, this rubber baron recognizes the uneasy, ambivalent tension at the heart of any moment in history: exploration does not disturb bodies at rest, it moves bodies under tension and well prepared bodies can relieve that tension and maintain their exploiting ways despite the best intentions of those who would change the way the world is run. We discover the domestic truth of this slaver when Fawcett gives a lecture on the existence of a lost civilization in the depths of the jungle to the Royal Geographic Society, a group of supposedly enlightened (rich white) men who should know better, but who raucously mock Fawcett when he proposes a journey to locate the lost city he calls Zed (please call it Zed, I know that’s hard for us Americans). 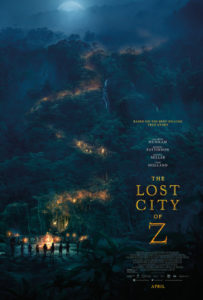 Gray rubs as raw as the wounds on Costin’s face the value of “the savages” in scenes like this, with Fawcett delivering rousing speeches in their defense, though neither Gray nor Fawcett ever quite escape the vocabulary of colonialist racism. Sadly, Gray only gently nuzzles the questions of masculinity that Sienna Miller’s Nina Fawcett brings up, especially when she asks to go on Percy’s next journey and is, predictably, rebuffed. We are still fighting these battles, not just as Percy Fawcett tries to prove that the world is wrong about the natives of Amazonia, but also as filmmakers wrestle with how to tell such stories.

Gray has put together a film that is at its absolute best in the quiet interior moments of extreme experiences. At one point, we join Fawcett and Costin in one of the many fruitless assaults on the German lines that get scores of men killed and accomplish nothing. The men are subjected to a mustard gas attack (a moment with decidedly uncomfortable modern echoes). Percy doesn’t get his gas mask and in his agony, he journeys back to his beloved Amazonia. Fawcett’s mind returns over and over again to the things he prizes the most in the world he has left behind at that moment: Amazonia while he is in England and his wife and children when he is in the jungle, a profound reflection on human beings’ limited ability to be present. Gray wrings the beauty out of these moments of interiority, exquisitely deepening our experience and connection with these explorers, members of the fight against prejudice.

The Lost City of Z is an elegiac meditation on the costs to the intrepid explorers who fight on the bleeding edges of the limits of human experience and a gentle call to heed these limits when they come.

The Lost City of Z, directed and written by James Gray, is rated PG-13 for scenes of brief violence and some adult language.

The Lost City of Z is open in DC area theaters. You can find listings and tickets at Fandango.