I’ve seen this play so many times. As a youngster of 19 I played “Horace” at NYU in a production that helped me along in my burgeoning acting career. Someone saw me in it, and suddenly I was playing at the Newport Casino Theatre in Newport, Rhode Island, with a brand new Actors’ Equity card which I cherish to this day. I saw the film with Bette Davis and Herbert Marshall (playing “my part”). I saw Anne Bancroft play Regina at Lincoln Center. I saw Elizabeth Taylor and Maureen Stapleton on Broadway. I even went to West 4th Street and saw a very peculiar version of it directed by Ivo van Hove starring Elizabeth Marvel. I’ve always loved the play, and I consider it the finest from the pen of prolific Lillian Hellman. It is certainly her best remembered, and it rejuvenated Tallulah Bankhead’s career in the United States when she introduced it to Broadway in 1939 for a run of over 400 performances.

I felt familiar enough with its dialog to enter the Manhattan Theatre Club Theatre on April 23 with a combination of trepidation and anticipation. To cut to the quick, trepidation went out the window long before the end of the first of three acts. Daniel Sullivan, who has staged more than 30 Broadway plays and another 30 off/Broadway, has shown a firm hand in guiding his cast of 10 to a perfectly gorgeous rendition of this tale of greed and control in the living room of the Giddens Home (formerly the Hubbard House) in a small southern city circa 1900.

The extra added attraction in this particular version is that two fine actresses, Cynthia Nixon and Laura Linney, are alternating in the roles of Regina Giddens and Birdie Hubbard, sisters-in-law cut from two very different cloths. I would have loved to see these two excellent players play both parts, but the performance I saw had Ms. Linney as demanding, dominating, handsome Regina and Ms. Nixon as her submissive, frightened, disappointed sister-in-law. The characters are so well defined by their playwright that it must be great fun to be allowed to move from one to the other four times each week. Ms.Linney’s Regina is feminine to her finger tips, mobile like a panther, and twice as lethal. When advised by her very dominating brother Ben that she’d “get further with a smile,” she turns one on that illuminates the entire room, and it’s frightening.

Ms. Nixon’s Birdie is externally far less neurotic than she has sometimes been played (Patricia Collinge, the creator of the role put her stamp on it not only on Broadway but again in the Bette Davis film) but Cynthia Nixon’s attack works perfectly as circumstances bring her frustration and disappointment to the surface, slowly this time. Beautiful work from both actresses, and time has been found for them to share pleasant and intimate moments with each other as well. Really, the creative idea of having them switch roles only brings more interest from the audience, and many will return to check out the subtle differences in the conflict as it’s played out by two equally gifted actresses.

The rest of the Hubbard and Giddens families remain in very capable hands. Richard Thomas, the John Boy of “The Waltons” fame from years ago, has ripened into one of our most valuable character actors, and now as Regina’s husband Horace, he brings tremendous honesty and strength to the role:a man nearing the end of his marriage and his life as he deals with a badly damaged heart. Returning from a self imposed exile of over five months in a hospital, he is able to declaw his grasping wife in a last gasp of lethal strength. His final confrontation with her is colossal and watching that battle is a satisfying meal for an audience with a voracious appetite for it.

Peripheral to it, on the sidelines, Regina’s brothers Oscar and Ben (Darren Goldstein and Michael McKean), along with her nephew Leo (Leo Benz) are helpless to regain control over the family’s fortunes. And Alexandra (Regina and Horace’s daughter, played by Francesca Carpanini) emerges from the tentativeness of a teenager into the conviction of a grown woman as she is exposed to some bitter truths that have been kept under wraps for most of her life. David Alford, as the Chicago tycoon whose business offer gets the play started with a fine first scene, plants all the seeds to be harvested as the play progresses. The electric currents that bind the three adult siblings suggest clear and present danger.

Michael McKean as brother Ben is the leader of the pack in this family because he’s the oldest and is certainly more shrewd than his brother. Brother Oscar is a man who would have had to settle for mediocrity as a life style were it not for an inheritance and the money his wife Birdie brought to their marriage. Nephew Leo is a spoiled young man who has no problem living off the largesse of his father and uncle Ben. Leo is interested in pleasure, and he doesn’t much care where or how he finds it. Family servants played by Caroline Stefanie Clay and Charles Turner bring great dignity to their supporting roles. Ms. Clay’s “Addie” in particular makes clear her concern and awareness of the power plays going on all around her.

Put all these interesting characters in a living room, pick them up at a time when a business venture is about to bring them much closer to the greater wealth they all hoped to achieve, and breathe life into them by a fine company, and we have a truly engrossing evening of theatre, craftily put together by a playwright of considerable power. Lillian Hellman, whose veracity was questioned later in her career with the publication of her book Pentimento, left us The Little Foxes which has relevance for us now, perhaps even more than it did for audiences in 1939.

Director Daniel Sullivan, Scenic Designer Scott Pask, and Costume Designer Jane Greenwood have placed their actors in a magnificent room, designed their outfits in a manner befitting their very comfortable circumstances, and made certain that all of the many key moments in this finely crafted play are delectably delivered by a perfect cast. 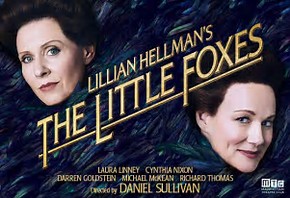