That’s a scene – an entire scene – from British playwright Caryl Churchill’s intriguing play Love and Information. The scene is entitled “Dinner,” and it lasts less than 30 seconds. In scenes like this one, showing how people in the 21st Century fail to communicate properly, Churchill boldly rewrites the rules about how a playwright can communicate with her audience. And Temple University Department of Theater’s production – or should I say “productions”? – interprets her words in novel and unexpected ways.

Churchill demonstrates how the abundance of data in modern society has changed the way we interact with each other. Humans may not connect with each other the way we should, but we’re doing it quicker than ever – and for some people, that seems to be enough. Yet to Churchill, technology isn’t something to be afraid of – it’s something we need to harness so that it serves humans, rather than the other way around.

These are cogent and essential points. And Churchill presents them in an appealing (and sometimes delightfully absurd) way. But she also makes the same points over and over, blunting their impact. And while Churchill’s compassionate viewpoint humanizes her subjects, many of the characters still come off as ciphers, disappearing just when you’re getting to know them. The play has many sweet, charming moments, but because the scenes are so brief and the characters are so anonymous, theatergoers expecting conventional dramatic development may feel frustrated and confused.

Still, Love and Information is never less than fascinating. It’s intimidatingly cerebral – especially when it ventures into mathematical and scientific matters. And Churchill breaks new ground in the way the play is constructed. Her script consists only of dialogue – there are no character names, no stage directions, no settings. So who is speaking? What is the character’s age, ethnic background, gender, or gender orientation? And in what order do the scenes appear? All of that is up to the director. Temple Theaters has taken Churchill’s directives (or lack of directives) to heart by offering two separate productions of Love and Information that are being presented in rotating repertory. One production is directed by Liz Carlson, the other by Noah Herman. Ten actors play all the roles in Carlson’s production, another ten in Herman’s.

I caught Herman’s production during its opening weekend (though I missed Carlson’s). Herman’s production is fast-moving, especially when it’s time for a scene change: at the end of most scenes, actors stride onto the stage to take their places for the next scene. After a momentary blackout, we’re on to the next scene (though occasionally some pre-recorded music is heard). It’s an approach well-suited to Churchill’s themes. And Herman finds the heart in what could have ended up as a remote, clinical curiosity. (It is strange, however, to hear casual references to quintessentially English locales like Brighton, Land’s End and John O’Groats coming from actors with Philly accents.)

Apollo Mark Weaver’s set design is a group of stackable, sterile squares, resembling pieces from a board game, that serve as chairs, tables, beds, and platforms for the performers; the audience is assembled on two sides of the playing area, allowing for multiple points of view. Nick Ligon does the nimble lighting, and Gary Miller’s projections show news reports and other scraps of video (plus some humorous interludes) intruding into Churchill’s world. Melanie Green provides nicely understated costumes for Herman’s production; Elizabeth S. Ennis does the costumes for Carlson’s production.

Love and Information is challenging – for the audience, and for the cast and crew. You may not learn much about the characters, but you’ll observe a lot about human nature, and you’ll be given a lot to ponder about modern society and your place in it. By creating a rotating repertory of dueling productions, Temple Theaters proves its commitment to Caryl Churchill’s brave and unconventional concept. Cheers to Temple for taking a big chance with a quirky little show.

Running Time: One hour and 20 minutes, with no intermission. 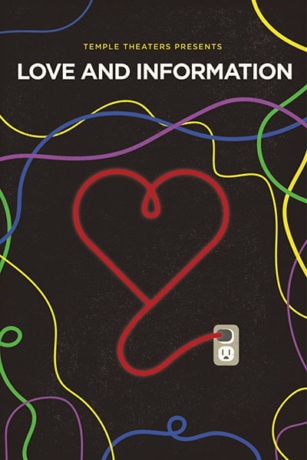 Love and Information plays through April 30, 2017 and is presented by Temple Theaters, performing at the Randall Theater — 2020 North 13th Street, on the campus of Temple University, in Philadelphia, PA. For tickets, call the box office at (215) 204-1122, or purchase them online.