Published in 1915, Edgar Lee Masters’ Spoon River Anthology – a collection of free-verse poems in which the deceased residents of a fictional rural town in Illinois recount episodes from their lives and impart the values of their society – provided the inspiration for the new musical homage Return to Spoon River by Martin Tackel (who, like Masters, had a long professional career as a lawyer). Presented by Creative Arts Lab and directed by Gwen Arment in the intimate space of The Lion Theatre at Theatre Row, the show presents an old-fashioned, nostalgic, moralizing slice of mid-western small-town Americana, conveyed through the accounts of multiple characters and remembered by Ham Greene and Julia Kessler, two former inhabitants who meet in the local cemetery.

Andrew Diaz’s grey-toned scenic design makes good use of the small stage, creating a backdrop of wall tombs with candles to set the locale, instead of a field of tombstones that would crowd the space and limit the ensemble’s movement. Stone benches and ceramic lattice-work garden stools provide apropos seating, and yellowed papers inscribed with epitaphs are suspended above, to evoke the show’s source in Masters’ poetry.

Tackel’s adaptation is presented in the format of a series of disjointed monologues and reminiscences – expected in an anthology of poems, but not as effective in a stage production. The individual stories, not all of which are related to the memories of Ham (played by Peter Husovsky) and Julia (Brittany Proia), lack narrative fluidity and cohesion, further accentuated by staccato shifts in lighting and blackouts (lighting design by Zach Pizza). The segments of memories are also interrupted by traditional American songs and hymns performed by the ensemble (Stephen Belida, Paulette Oliva, Erik Schark, Tepper Saffren, Brittney Lee Hamilton, Alison Whitehurst, Kendra Jo Brook, Andrew O’Shanick, and Jessica Kuhne) that reassert the old-time mood of religion and patriotism (including “Down to the River to Pray,” “Simple Gifts,” and “Battle Cry of Freedom”), but do nothing to advance the plot.

Under Arment’s direction, the cast’s delivery of the outdated language sounds unnatural and stilted, at times recitative, at other times cloying and histrionic, with mugging and emoting that miss the mark for either drama or comedy. Though Alison Whitehurst does a fine job in distinguishing the seven characters she portrays, adopting their array of accents, and expressing their feelings, the performances as a whole are generally lacking in credible emotion. As a result, the show’s underlying didacticism seems little more than an antiquated cliché, as the living and dead seek the answer to Pontius Pilate’s famous question “Quid est veritas?” and the “mystery of the ether.”

In addition to speaking their lines, the actors, in period-style costumes by Lui Konno, dance (choreography by Arment), sing, and play an assortment of folk instruments (musical direction and arrangements by Brian Hurley). While their vocals and harmonies often hit a sour note (again, Whitehurst was a standout with her clear and beautiful soprano voice), and their movements are unimaginative (e.g., marching to “When Johnny Comes Marching Home Again”), they excelled at accompanying themselves on guitar, fiddle, harmonica, tambourine, and piano, and in creating a spirited mood appropriate to the numbers, with a tuneful rendition of “Will the Circle Be Unbroken” numbering among the most memorable. 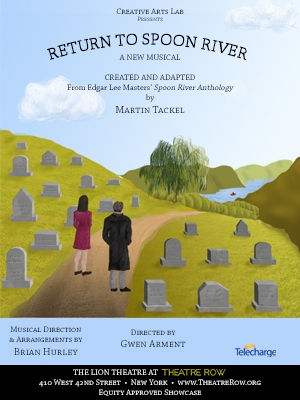