There’s the daily ordeal of truth, imaginary facts, and shifting identities. There is wealth and privilege and assumptions based on hearsay, without understanding. Within all of this lies the day-to-day news cycle of now. 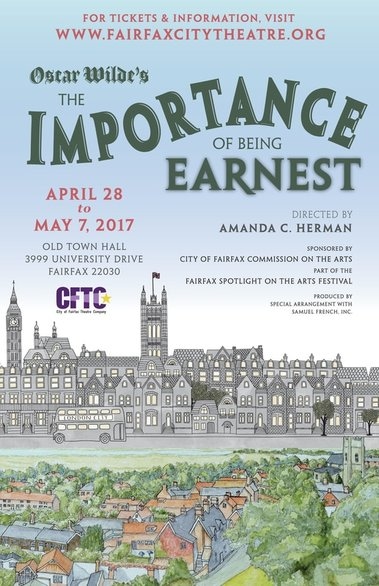 Then there is a play first performed in 1895. Oscar Wilde’s The Importance of Being Earnest satirizes the upper-class societal conventions of late Victorian London with high farce and witty dialogue. In this production, by the City of Fairfax Theatre Company, outward appearances of setting are updated with a tap of technology; pocketed cell phones, selfies to preserve the moment, iPad calendars and a diary on a laptop. Costumes by Kristina Martin delightfully further the update, staying within the Victorian palette yet adding current touches for the women such as patterned stockings, short hemlines; and for the men, mixing frock coats with jeans.

Directed by Amanda C. Herman, The Importance of Being Earnest finds a lively sense of fun in blending minor details that matter, and with John ‘Jack’ Worthing,( played by Eric Kennedy) and Algernon ‘Algy’ Moncrieff (played by Jonathan Ryan). Together the men have a finely tuned partnership. Algy is more flamboyant, consuming with abandon, and without constraint, loading up on muffins. Jack has a problem with identity, but confesses to a connection to a “handbag at a railway station.” In this position of society, it’s all in the name.

In the order-of-things are two young women going along with the rules of engagements, christening, and marriage, though it is clear they make a pathway to get to what they want. Gwendolen Fairfax (played by Sallie Keena) is upright and proper, though she demands a proposal on bended knee. Cecily Cardew (played by Ashley-Rose Dickey) is delightfully excitable and outdoorsy, barefoot, balancing on one foot, or perched high above governess Miss Prism, played by Elizabeth LeBoo.

The Set Design by D. Scott Graham capitalizes on the location, Old Town Hall Fairfax, a classical revival style hall built in 1900. With Tuscan order columns in warm wood tones and a bare floor, fine touches are added with a low settee that converts to an outdoor garden wall, and heavy drapery that marks the boundaries. With audience on three sides, we are drawn into the parlor or garden space. Actors stand within reach, and so close that enunciation is visible. Lady Bracknell (played by Nancy Cahill) is powerfully dominant, has a long list of questions, and conditions that must be met. Altogether humorous but without a pause, Nancy Cahill deals an experienced hand of comedic timing that ties it all together.

Reverend Chasuble (played by Frank Gorrell) steps right up to the comedy too, with an intentional awkwardness that is enjoyably ridiculous. Entrances and exits by the houseman valet Lane/Merriman (played by Michael O’Dell) lend to the fun with the delivery of refreshments, and a reaction to couplings that happen down the line. It’s all in the physical fun.

In the City of Fairfax Theatre Company’s The Importance of Being Earnest, there are a lot of shifting facts, expectations, and misunderstandings. It’s satire and farce, and it figures into a solid production with a cast that connects, and a setting that reminds that something very old just may be very new again.

The Importance of Being Earnest  plays through May 7, 2017, at City of Fairfax Theatre Company at Old Town Hall – 3999 University Drive, in Fairfax VA. For tickets, purchase them online.