Eleven new musicals have opened since War Paint and here comes the last before the April 30th deadline for Tony Nomination. It’s called Bandstand and it didn’t offer us Bette Midler or Patti LuPone or Christian Borle or anyone else starring above the title. It didn’t offer Tony winners like Terrence McNally or Lynn Ahrens or Stephen Flaherty or Roald Dahl among its Tony-winning authors and composers. No Jack O’Brien here to assure us we’d have some dazzling direction.

No, it came up with Writer/Composer Richard Oberacker on book, music and lyrics, who has “created and promoted many original musicals you’ve never heard of” and Robert Taylor on book and lyrics who is “delighted to be considered a fresh face on the Great White Way at age 61.” Andy Blankenbuehler was hired to direct and choreograph and he did choreograph Hamilton but until now he was not on many A-lists for direction. Again it took dozens of producers to get Bandstand to Broadway but the Paper Mill Playhouse offered it a pre-Broadway trial just as it did for Newsies, and I must say it – Bandstand beat all the odds and breezed into town as the most refreshing and imaginative of the bunch of recent arrivals.

It is correctly subtitled “The New American Musical”. The sound of the mid-1940s is everywhere from the ballad “Love Will Come and Find Me Again’ (think “I Don’t Want to Walk Without You’) to the clever “I Know A Guy” which has some of the flavor of Frank Loesser’s Guys and Dolls, to the anthem “Nobody” which offers a new take on what made “Don’t Rain On My Parade” work. But it’s not all pastiche, not by a long shot. There is youthful invention everywhere, and I thought the intrusion of sad and frightening memories from the war from which these men have just returned elevated the material beyond the youthful feel of a musical like Best Foot Forward to a work of more substance. As a matter of fact there is a song (“First Steps First”) that would have worked for any number of young stars in the many musicals in which they appeared under George Abbott’s direction once upon a time.

To play the central love story in Bandstand Corey Cott and Laura Osnes are center stage and one can see a big future for both of them. For recognition, Mr. Cott might as well be making his debut, for he spent two whole years as a replacement for Jeremy Jordan in Newsies so most of us had not seen him before. He subsequently made a mark in Gigi but there he was lumbered by a revival that never matched the film that inspired it, and he was playing the role that Louis Jourdan had brought the weight of many added years that made the story more poignant.

As “Donny Novitsky”, his current role, he delivers a true star turn – as singer, actor, dancer, and pianist he dominates just as his character does. Laura Osnes, who’s played Richard Rodgers’ “Cinderella” as well as the very different “Bonnie Parker” in the short lived Bonnie and Clyde, has now found a role that makes good use of her considerable talents. As Donny puts together a swing band to participate in a talent search honoring WWII veterans, the collection of Alex Bender, Joe Carroll, Brandon J. Ellis, James Nathan Hopkins and Geoff Packard create the sounds we’ve come to know from the best of the big bands that were the answer to all young prayers in those very up days following four years of America at war.

The development of the book and lyrics is deft and often surprising, particularly rare in the young talents driving musical theatre today. Add Beth Leavel, well remembered for her success as The Drowsy Chaperone, as the heroine’s spunky and wise mother, and the whole evening is as refreshing as an ice cream soda if that sort of thing works for you, as it certainly does for me.

Noticeable contributions to the evening’s success are Greg Anthony Rassen’s arrangements and the orchestrations he shares with Bill Elliott. They support and augment the considerable talents of the five actors in the band, all playing their own instruments on stage, as well as the considerable number in the pit playing under Fred Lassen’s direction. If Bandstand, as the last musical entry of the season, is a hint, we have reason to hope we’re in for a good time in the year ahead. 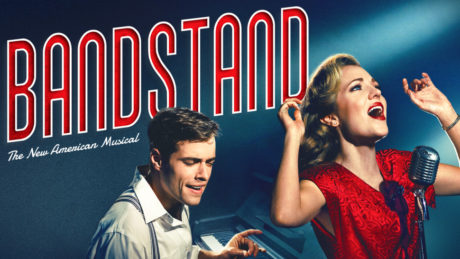