H.M.S. Pinafore, Gilbert and Sullivan’s famous operetta, directed by Michael Hartsfield and produced by Maureen Rogers, opened on April 28, 2017 at the Laurel Mill Playhouse on Main Street in historic Laurel, MD, and this production is sheer fun and thoroughly entertaining.

The two English composers’ music laid the foundation of the modern musical comedy.  Unlike opera, there is real dialogue, but, unlike the musicals to which we have grown accustomed, the lyrics here convey important information to the plot (“Kind Captain, I’ve Important Information”), characters’ background (‘I Am Captain of the Pinafore”)and feelings (”Sorry Her Lot”) and even help visualize the scenery ( (“Barcarolle -Sir Joseph’s Barge”).

H.M.S. Pinafore is probably one of their better-known works, and like many of their operettas it has many light melodies and humorous lyrics. The plot is an old one. The Captain’s daughter, Josephine, is in love with Ralph, a simple sailor below her station. Her father wants her to marry Sir Joseph who is above their station. Ralph is in love with her as well. In this work, G.&S. satirize the class system in England as well as the British Navy. The operetta  moves quickly.  Many of the songs, like “Things are Seldom What They Seem”, will sound very familiar. I was surprised how many of the lyrics I could mentally sing along with that I learned back in music class, many decades ago.

Michael Hartsfield not only directed the production, but is credited with set, light, and the sound design. Hartsfield has a talented cast with spectacular voices.

Tania Rosa Bindhoff-Frieswyck plays Josephine. Her voice is of fine operatic quality and her training in the area of opera and operetta is obvious. She shines brightest in the musical number “The Hours Creep on Apace”.

Matthew Henry Frieswyck’s wonderful voice booms as Captain Corcoran.  He also conveys some the humor of the operetta in the familiar song, “I am the Captain of the Pinafore”.

The equally powerful voice of Emma Jensen as Buttercup, is a great match for this cast.  Singing two of the most famous musical numbers, “I’m Called Little Buttercup” and “Things are Seldom what They Seem”, she helps set the theme “Don’t judge a book by its cover.”

Gary Eurice makes his G.&S. debut and is up to the challenge as Ralph (“l” is silent) Rackshaw, the sailor in love with Josephine.  His higher octave voice is a nice contrast to Frieswyck’s. Eurice conveys the love sick sailor admirably during “The Nightingale”.

Gene Valendo is both a fine singer and comic actor in the role of Sir Joseph.  Most memorable is his rendition of “I Am Captain of the Sea.”  Also, very funny was Jeff Dunne’s Dick Deadeye, the villain of the show. He was just menacing enough particularly in “Carefully on Tip-Toe Stealing”.

Hartsfield has rounded the cast out with other fine voices including Emily Bruun, Bob Cicconetti, Anwar Al-Mallah, Barb Gasper, Brianna Weston, Victoria Rose Brown, Julie Rogers, Victoria (Tori) Simmons, Marge McGugan, Lori Bruun, Michael Eurice, and Brandon Seehoffer, and all blend harmoniously together in “We Sail the Ocean Blue”, “Glee” and the “Finale” of Act I and II.

The costumes are designed by Marge McGugan with Carol Mead Cartmell and Lynn Kellner.  They were bright and cheerful as well as in the period of the Victorian Era.  They are a good contrast to the monotone set.  Also. a nod goes to McGugan, Castmell and Tommy Malek for Hair Design.

The Musical Director and piano accompanist was Mimi McGinniss who helps the cast never lose a beat or a note with these the very complicated lyrics. In a operetta as fast-paced as H.M.S. Pinafore that is a true accomplishment.

Julie Rogers does a splendid job as well as the choreographer.

So, sail on up, or down, to Laurel for a wonderful taste of the salty sea and catch H.M.S. Pinafore before it sails away.

Running Time: One hour and 45 minutes, with an intermission. 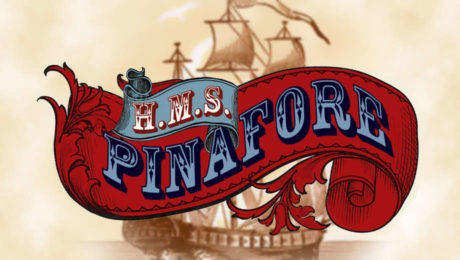