If you’re looking for a musical of Broadway quality in the Baltimore area, look no further than some of the work being produced by Memorial Episcopal Church’s drama ministry, Memorial Players, now in its 16th season. Having recently produced the superb Ragtime, Memorial Players is sustaining excellence with its current production. With themes of rejuvenation and exploration, Memorial Players’ The Secret Garden, as directed by Bill Kamberger, and with Book and Lyrics by Marsha Norman and Music by Lucy Simon, is a family-oriented, charming good time, brimming with star quality.

The show is based on a serialized, 1910 novel by Frances Hodgson Burnett, and tells the story of a young girl, Mary Lennox, who, after suffering the loss of her parents to a cholera outbreak in British Empire-ruled Bombay, India in 1906, comes to Misselthwaite Manor in Yorkshire, England and is taken in by her new guardian, her uncle Archibald Craven. From there she befriends her sickly cousin, Colin Craven, and the titular, walled garden becomes the center of Mary’s interest and of the play. The story is populated with many interesting characters including Archibald’s brother Dr. Neville Craven; Lily Craven, the ghost of Colin’s late mother; Rose, the ghost of Mary’s late mother; a gardener Ben Weatherstaff; Martha Sowerby, Archibald’s maid and her brother Dickon.

There are Broadway level performances in this show. Kamberger has assembled a cast that can act and sing equally well, including the dynamic double threat Ruby Webb as Mary Lennox; the uncommonly good Gabe Viets as Colin Craven; the excellent E. Lee Nicol as Dr. Neville Craven; Stephen M. Deininger, who was fantastic as Archibald Craven; Anastasia Barrett Edmonston as the officious Mrs. Winthrop; the lovely voiced Jennifer Viets as Lily Craven, and golden-voiced Charlie Roberts as Dickon.

The first song, “Clusters of Crocus” was wonderfully sang by Jennifer Viets as Lily. Webb as Mary, and Deininger as Archibald, and the Dreamers stood out in “I Heard Someone Crying.” Lauren Lowell in her role as Martha the comical-relief maid, excelled in the light-hearted “A Fine White Horse.”

Deininger and Viets made the characters Archibald and Lily show a strong affinity for each other in “A Girl in the Valley.” Webb, Lowell and Roberts stood out in the rustic sounding “It’s a Maze;” and I loved Roberts’ pop star voice in Dickon’s “Winter’s on the Wing.”

Webb and Roberts, vocally excelled in “Show Me the Key,” and Deininger’s solo, “A Bit of Earth” powerfully moved the story forward. “Storm 1” by the Dreamers was awe inspiring, and “Lily’s Eyes” by Nicol’s Neville and Deininger was Broadway worthy. “The Final Storm” featured the angelic voices of the Dreamers.

ACT II began with “The Girl I Mean to Be,” which featured a blissful solo by Webb. Deininger’s powerful solo in “Race You to the Top of the Morning” was one of the best in the show. Things got better from there in a magnificent duet by Roberts and Wells in “Wick.” Gabe Viets, as Colin, displayed strong comedic talent in the scenes preceding “Come to My Garden/Lift Me Up” by him and Jennifer Viets as Lily.

The Dreamers brought a high energy to “Come Spirit, Come Charm” and Nicol’s angry solo in “Disappear” showed the true nature of his character Neville. Romantic love permeated “How Could I Ever Know? (How can I let you go?) by Jennifer Viets and Deininger.

Set and Puppet Designer John Seeley made excellent use of rolling scenery wagons, which rotated 180 degrees, switching from garden walls to staid studies, among other transformations. Seeley made good use of the space in the church’s sanctuary. Musical directors Gregory Satorie-Robinson and Tim Viets, who also served as Orchestra Conductor, made sure that the orchestration was flawless. I loved the groovy moves dreamed up by Choreographer Neeta Shah Gandhi for the cast.

The costumes were straight out of an Ivory Merchant film like Howard’s End (the book of which was published the same year as The Secret Garden) thanks to Customer Rosslyn D. Kooser. Jennifer Viets and the character Rose (Ginny Samford Hornbeck) especially looked fantastic in their costumes. The lighting, which included buildings and lightening bolts projected on a large scrim, worked well thanks to Lighting Designer Charles Danforth III.

The Secret Garden is a winning tale full of mystical themes, family drama, and sheer wonder—great for viewers from eight to 80.

Running Time: 2 hours and 35 minutes, with a 15-minute intermission. 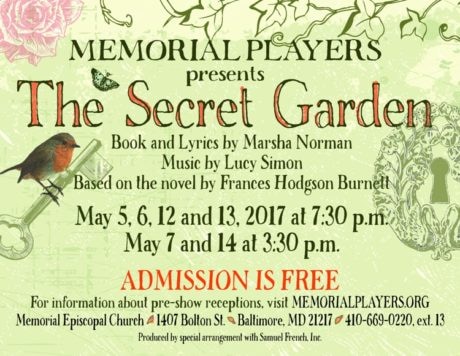 The Secret Garden plays through May 14, 2017, at Memorial Players performing at Memorial Episcopal Church – 1407 Bolton Street, in Baltimore, MD. Admission is free, and donations are welcomed (text MEC to 73256). Tickets are not required, as seating is first come, first served. Information on Memorial Players pre-show receptions (which include VIP seating for the show) can be found here.