The convergence of place, play, performance, and present political predicament was almost too perfect.

The venue, Dupont Underground, deserves a visit in its own right and its own review. One enters down a stairway and arrives in a vast, arcing, echoing chamber, with murals on the outer wall and trolley tracks embedded underfoot. It was built for a streetcar system that was superseded by cars and buses after World War II, and during the Cold War was a bunker stocked with provisions in the event of a nuclear bomb.

The architectural drama that now imbues the space—and makes you go “Wow, something amazing could happen here”—compares to that of other theaters built for that purpose on massive budgets. The fact this is a “found” civic space reclaimed for live performance gives it a populist vibe that money can’t buy. Plus, the very location (which could not be more public-transportation accessible) invokes the history of political resistance in the city that has centered around the Dupont Circle fountain.

“Every protest that has ever been here has been upstairs,” said Artistic Director Susan Galbraith in her introductory remarks on opening night.

Alliance for New Music-Theatre is a company “committed to engage audiences changing the conversation through the arts [italics theirs].” This production of Protest is its first as Dupont Underground’s theater in residence. The once-banned play has been smartly directed by Galbraith and designed by Joey Wade (set, lights, and projections) to suggest the living rooms in which the play was first performed privately to circumvent state censure. The simple makeshift look is apt and compelling: Two chairs and a table on a carpet on a raised platform backed by a plain white wall. LED lights behind the audience wash the stage in shifting hues and brightness with no discernible reason except to convey an uncanny context of uncertainty, instability, flux, and possible power outage.

The production began as a commission by the Embassy of the Czech Republic and was performed to mark Havel’s 80th birthday at, among other places, the President Woodrow Wilson House. The set of Protest now at Dupont Underground has on its side walls projected photographs of that interior, including a portrait of First Lady Edith Wilson.

The character whose home this is,Staněk (David Millstone), might well be that grandly domiciled. Staněk once lived a politically fringy life but now, having made it big as a television writer, lives comfortably well off, keeps his radical past at a remove, and enjoys gardening and fine brandy. He could easily be pegged a bourgie sell-out except he finds himself in a situation that he knows needs an activist assist. His daughter’s boyfriend, a pop star, has been imprisoned by the authorities. In hopes of mounting a petition campaign to free the young man,Staněk has invited his still-dissident longtime friend Vaněk (Drew Valins), to come for a visit. Vaněk was once himself a political prisoner. Staněk needs his political cred but doesn’t want to take any risk of his own. Vaněk turns the tables and challenges Staněk himself to sign the petition. Will he or won’t he? Dare he or daren’t he? Vaněk’s and Staněk’s disagreement about political tactics drives the drama, and Millstone and Valins play out their differences with probing panache.

With witty direction from Galbraith, Millstone leads Valins in seeming to connive leaning over the parlor table, then hilariously crawling under it. Each in turn plays at times to the audience with an entertaining earnestness, as if expecting allies for their views. Indeed there emerges a cleverly competitive subtext, an invitation to join Team Vaněk or TeamStaněk.

The playwright has given Staněk most of the lines, and Millstone plays them to the hilt, sometimes shouting them resoundingly into the cavernous tunnel. His performance is fantastically frenetic. Vaněk has far fewer lines, and Valins’s delivery is more deliberate, more quietly certain, less emotionally ostentatious. Clearly the audience Havel wrote for would have known what Vaněk was thinking because they like Havel were like Vaněk, so the character had less need to explain himself. The expansive character of Staněk, however, is where the play becomes a revelation.

Staněk’s debate within himself, articulated with textual precision, becomes an enthralling inquiry into conscience, courage, and complicity.Staněk has a long final monologue in which he weighs the consequences of signing or declining to sign the petition that would be the public protest of the play’s title. As scathingly scripted by Havel and here performed magnificently by Millstone, that speech is a show-stopping knockout, a moral-intellectual mind-blower. That it speaks with eerie specificity to current resistance to the #resistance is the best possible reason to see this show.

Note that Dupont Underground is accessible only by a stairway only partially equipped with handrails and has no restrooms, although patrons may use facilities in the lobby of the Dupont Hotel across the street. 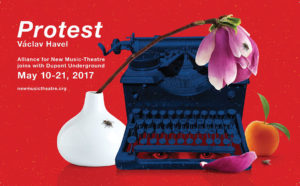 Protest plays through May 21, 2017, at Alliance for New Music-Theatre performing at Dupont Underground (public entrance is at 1500 19th Street NW, Washington, DC, on north side of Dupont Circle next to Starbucks and across from Dupont Hotel). Tickets may be purchased online.

LINKS:
‘Protest’ at Ambassador Theater at Flashpoint, by Justin Schneider.