Celebrating the 90th anniversary of its historic building, Ritz Theatre Company presents Dream: A Phonograph Musical, an original prequel to the genre of the ‘jukebox musical’ inspired by the hits of the ‘20s, ‘30s, and ‘40s. Created by Jeff Lesser (Vocal Director), Josh Kurtz (Writer), and Bruce A. Curless (Director), with Colin Maier serving as Music Director, the show brings together 26 songs from the era (along with a few from the ‘50s and ‘60s), to pay homage to earlier decades, when people had “time to think,” without being constantly interrupted by their digital devices.

The familiar songs are strung together by a narrative conceit, in which a young woman – the Dreamer, played by Jennifer Zellers – takes refuge in an attic filled with memorabilia to escape the noise of today’s world and the reality of a troubled relationship. As she sifts through the array of personal artifacts (including an old Victrola), they trigger episodic reminiscences and visions related to the lyrics of popular music from the past. Performed by Zellers and an ensemble of four who personify her Dreams – Terrance Hart, Abia Johnson, Nicky O’Neal, and Natasha Truitt – the numbers are accompanied by period-style choreography (by Zellers, Peter John Rios, and Grant Prickett) and a live three-piece band (Maier on keyboard, Stan Davis Jr. on bass, and Derrick Banks on drums).

To create a bittersweet mood of romantic melancholy and nostalgia, Curless’s direction and Maier’s music direction are decidedly slow paced and gentle, but often feel enervated in comparison with the vitality of the originals, as expressed in the title of Noël Coward’s “World Weary.” Fog effects, low nocturnal lighting by Jen Donsky, and the sounds of a thunderstorm (sound design by Pat Defusco) contribute to the darkly evocative tone. For me, the show and the singing would have benefitted from a more upbeat tempo and a higher level of energy – an opinion that the opening-night audience seemed to share, as reflected in the most enthusiastic applause of the evening being given to a spirited version of Coward’s “Mrs. Worthington” of 1935, delivered by the ensemble in funny feigned English accents.

Among the show’s other highlights are the smooth and balanced a capella group harmony and dancing in “Java Jive,” made famous by the Ink Spots in 1940; the company’s well-synchronized tap routine to “We’re in the Money” from the film Gold Diggers of 1933; Truitt’s flirtatious moves in Fats Waller’s “Keepin’ Out of Mischief Now,” revived in the Broadway musical Ain’t Misbehavin’; and Johnson’s terrific performances of “Old Devil Moon” and “Smoke Gets in Your Eyes,” which best captured, in black tie and with tongue-in-cheek, the debonair stylings of the music idols of the era. Other numbers by the company and solos by featured cast members suffered from uneven vocals that hit several shrill and flat notes, lacked fluidity and resonance, and struggled with breath control, or from histrionic mugging that was often more annoying than amusing.

Vintage styles of dress, formal wear, and military uniforms by Tina Heinz have an authentic look, while cleverly distinguishing between the vibrant red worn by the Dreamer and the muted shades of the Dreams. The stepped platforms of the set, designed by Bart Healy, facilitate the dancing and blocking of the actors, though are not typical features that one would expect to find in a real attic space. But then again, the Ritz’s new musical vision of the past is all a Dream! 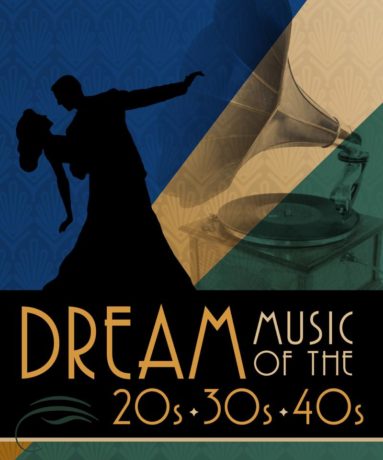