Curious questions tease the brain during this peculiarly provocative production. One is: Is this theater? Another is: What are we to make of it?

The Man Who, just opened at the estimably idiosyncratic Spooky Action Theater, is about how the mind can be glitchy. It takes the form of a succession of 17 scenes depicting neurological defects that can occur in the human brain—actual syndromes that have been clinically observed and described in the literature. Selected malfunctions are acted out by two women and two men switching roles from scene to scene between playing a Doctor and playing a Patient (a nice touch that dissolves the wall between normal and not). Though the enactments cohere in style and substance, the vignettes are not connected—there are no characters as such, there’s no continuity of plot, there is no omniscient writer’s point of view. And the scenes occur in a sequence that has no discernible significance.

The Man Who was devised in France in the 1990s by the influential director Peter Brook, who with his collaborators, among them coauthor Marie-Hélène Estienne, was inspired by case studies in the 1985 book The Man Who Mistook His Wife for a Hat by Oliver Sacks, the noted author and professor of neurology. Besides that book, Brook and and his troupe based their development of the piece on first-hand observations of the behavior of people whose minds were in various ways clinically out of order.

The result is the neurological equivalent of a surgical operating theater without the lecture. Or a cognitive freak show without the carney and condescension.

Helmed by Founding Artistic Director Richard Henrich with Associate Director Elena Day, the production is exceptionally well designed and crafted (as has been typical of work I’ve seen recently at Spooky). The set by Giorgos Tsappas is all stark planes in gray, a perfectly sparse neutral gallery in which to mount the vivid portraits. The costumes too are unassuming and in neutral tones, such that the presence of the actors is what stands out. Colin Dieck’s lighting achieves remarkable effects as actors move around the space beyond the stage and seem always to be lit dramatically wherever they roam. The sound design by Gordon Nimmo-Smith smartly makes the piece approachable and even relatable, not sensationalized or bizarre. And Elizabeth Long’s aptly picked props play fascinating roles in diagnosing and demonstrating the patients’ various syndromes—which are always portrayed compassionately, never mimicked to be mocked.

The humanity that shines through the show, the warmth it radiates, is its strong suit and is a credit to the uniformly excellent cast: David Gaines, Tuyet Thi Pham, Carlos Saldana, and Eva Wilhelm. (Pham is especially impressive; more than enacting her subjects she channels them, as when an electrode is placed on her forehead and she exults uncannily with long-lost memories of her youth.) All the actors—whether doubling as white-coated doc or as plainclothes patient—genuinely welcome us as trusted initiates into a world where our curiosity though uncomprehending need never be unaccompanied by empathy. This sensitivity matters deeply, not least for anyone in attendance who knows or who has known someone whose mind has been afflicted in some way.

But is it theater?

In 1995, just before The Man Who was to open at the Brooklyn Academy of Music,  Brooks told TV interviewer Charlie Rose,

It isn’t written with a story…. There is no narrative. Can you make theater without a narrative? It seemed to me of course you can, but how is what the work’s about.

Certainly the acting, directing, and stage arts in this Spooky Action production are first-rate. But the fragmentary text, clinical concept, and non sequitur structure may not work as theater experience for everyone. All the neurological computing errors on parade can leave one constantly uncertain how much is meant to be entertainment, how much is meant to be edification. There are isolated obvious laugh lines; but don’t come expecting a comedy, for there are long discomfiting stretches when expressing amusement would seem somehow inhumane.

So…what are we to make of it?

What Spooky Action’s The Man Who achieves—and this it does with emphatic success—is to leave us trying to understand, with our own minds such as they are, what has gone wrong in the minds of others. What has happened to them and how and why? Who are they now that it has happened? Then: Who are we to whom this has not happened?

The Man Who leaves us, in other words, trying to make sense. Trying to surmise significance. Trying to create meaning where there may ultimately be none. Which is after all the point of having a human mind in an incomprehensible universe. And bestirring awareness of that amazing cerebral capacity is the mind-expanding reason to be perplexed by this show.

Running Time: One hour and 35 minutes with no intermission. 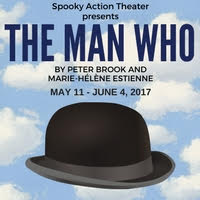 VIDEO:
Peter Brook talking about The Man Who on The Charlie Rose Show, March 2, 1995.