Morgan James has one versatile voice. It is a voice that that can slip effortlessly from light lyric coloratura to Broadway belting, to Soul singing. Take a look at her career: James earned a coveted spot in Juilliard’s classical music program then nabbed roles in four Broadway musicals before launching her solo career as a singer/songwriter.

It was in 2013, during her fourth stint on Broadway, playing Teena Marie in Motown: the Musical, that James met the legendary Berry Gordy, whose autobiography was the basis for the musical. Gordy saw something in James. Something he’d seen before.

When Berry Gordy tells you that you have the talent to make it as a singer/songwriter, you listen. As the founder of Motown Records, Berry Gordy signed such talent as Smokey Robinson, the Jackson 5, Marvin Gaye and Gladys Knight. Though his record producing days were behind him, Gordy, encouraged James to write her own music and introduced her to the people who could produce it.

Flash forward several albums later, and James is a bona fide Soul singer with legions of fans on social media. Reckless Abandon is her first album containing all self-penned songs. (She collaborated with a variety of co-writers). Hungry to share her music with fans across the country, James lost no time in launching a tour when the album came out last month. I spoke to her by phone as she enjoyed a few well-earned days at home during her whirlwind tour. 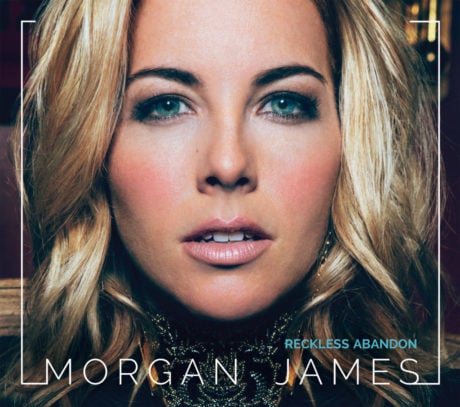 I hear you just finished part one of the Reckless Abandon tour?

And you’ll be kicking it off again here in DC at the Hamilton this Thursday, May 18?

Yes! One of my favorite rooms ever! It’s a great space; it’s got an amazing piano; and it attracts such an informed listening audience. I love it!

What can people expect from your show?

We will be playing a lot of songs from the new record, Reckless Abandon, a few songs from my first album Hunter, and a few covers. One of the exciting things about touring is figuring out what all these things sound like live. On the record, they are completely different. I have my horn section and my 12 other Morgans doing background vocals, so in a live show, the songs take on a whole new life.

How big is the group you are touring with?

We have piano, bass, drums, guitar and me!

Every song came to life in an entirely different way. Doug Wamble [James’ husband and guitar player in her band] and I wrote a lot of the songs together. We have a sort of shorthand because we’ve been writing together for so many years. But some of the really cool songs that ended up on the album were with people that I had never written with before, so that is kind of exciting.

I wanted to have a lot of different songs to choose from on this album so my management set me up on a lot of co-writing sessions which I always joke are kind of like blind dates! My manager would say “hey, how about writing with this person?” and I never said no. I went on, I think, 12 sessions in Nashville, 8 in LA, a bunch in NY so I could get as many songs written as possible and also learn a lot.

How do you approach writing the lyrics to the songs?

It’s always different. Often the lyrics come first. You would think that since I’m a singer the melody would come first, but I’m a stickler for lyrics. Like “Ransom” on the Reckless Abandon album is about somebody who you give everything but they hurt you anyway. You pay the ransom but you’re not released. We built the whole song around that idea. I painstakingly revise my lyrics until I feel they are right. I can’t do garbage songs. I like songs that have a story, a meaning, a purpose.

Tell me about crossing over from Broadway to Soul Music?

Well, I came to Soul Music accidentally, I think. When I was in my first Broadway show The Addams Family, I started a band that I would play in on my days off. I didn’t really know what I was doing and didn’t have an audience yet, but I really liked being my own boss and creating something from scratch. I didn’t know how to do it, but I set off on this journey to make music my full-time job.

Soul music has been in me because I immerse myself in it. I think that it was in a strange way, inevitable because I always say, you are only as good as what you listen to. If you immerse yourself in Aretha and Nina Simone and Besse Smith and the Blues and Soul and all these things, then you will be able to imbue your own music with that sense of history. That is incredibly important to me now.

So no more Broadway shows for now?

Well, if the right project came along, I would consider it. But the more Broadway shows that I did, even though I loved them, I felt like I was working to bring someone else’s vision to life. But I really wanted to fulfill my own vision. It was through my last Broadway show, Motown, that I got my record deal, so it was kind of like all the world’s colliding.

And that happened through Berry Gordy?

Yeah, I auditioned for the musical about his life – Motown – and the minute we met we became great friends. He believed in me from day one. When I met him I wasn’t really a writer yet and he really encouraged me to write music and stay on this path. He was such a mentor to me. He introduced me to people at Sony and I’m incredibly grateful for that.

How do you find rebranding yourself as a solo artist and what does it entail?

It’s been a process. I couldn’t have done it by myself. I do it with the help of a huge team of people who give me assistance and advice. I think it’s a combination of talent, luck and hustle. Some people have it in equal amounts and some have one more than the other. The hustle portion takes into account social media, engaging with your fans, having the right brand, the right look, saying and doing the right things. That has been a process for sure.

I like being independent. I’m a control freak so I love being able to control what I put out in the world. I’m thankful that I have people who really help me with that.

At this point it’s just second nature. Every day I engage with people and painstakingly try to respond to every person who writes a comment or sends me a message on Facebook. I feel like if you engage with somebody, hopefully they’ll be a fan for life and go with you on the journey. I hear so many people who say “oh, I have no time for social media. It takes so much time,” and I’m like, well, it’s kind of a part of the job now!

So you must be pretty good at the hustle part of the job?

It’s probably my best part! I’m a hustler, man. I got home last night and I was already talking about the next tour. My husband was like “can’t you just rest?” I was like “No! Actually, I can’t!”

Right now there is nothing I love more than playing with my band and being in a new city every night.