10th Muse Productions’ The Wedding Party was a huge hit in Capital Fringe 2015 (the DCMetroTheater Arts review called it a “delightful comedic romp”). It was a show that Maegan Dominy co-wrote (with Mimsi Janis).  Now in her own full-length play Sioux Falls, just premiered at Mead Theatre Lab at Flashpoint, Dominy weighs in with both levity and gravity on the hot-button topic of abortion.

The drama that drives the play, however, is not so much the contestedness of the political issue as the complicatedness in the personal narratives of three women who urgently need abortion services. As such Sioux Falls is about their whys, not the opposition’s thou shalt nots.

The women’s difficulties and destinies are very different, but their destination is the same. They are all en route to Sioux Falls, the only town in South Dakota where there’s a clinic that that can help them. In Sioux Fall‘s structure as skillfully set forth by Dominy, the obstacles in their path are as much the state’s restrictive abortion laws as the conflicted circumstances of their own lives.

Conceptually the play’s storytelling is in thirds, each centered on one of the three women, with each of their stories composed and acted in its own style.

Kat is an ambitious grad student, a smart cookie and a would-be journo, who has shacked up the last four years with Robby, a wannabe rock star and amiable dim bulb. Upon learning she’s pregnant (“Fuck, fuck, fuck, fuckety, fuck…”), she asks Robby for help coming up with the price of an abortion. She’s not ready to have a kid. He wants her to have it but is always behind on his half of the rent. Cash-strapped but determined not to let her pregnancy or her partner deter her, she sets out in his heap for Sioux Falls with a credit card.

Kat’s trimester of the storyline is written and played as quick-witted rom-com. Tess Higgins as Kat is a star-quality comic actor who here displays a gift for millennial angst. And Jonathan Rizzardi as Robby is a thoroughly enjoyable dufus. Robby may be a stock slacker from many a recent movie, but there’s a comic chemistry between Rizzardi and Higgins that feels fresh and spontaneous. Moreover Dominy has given them the play’s funniest lines—which kept me chuckling a lot.

Mara is an earnest and idealistic professor of journalism, up for tenure at a small college. Her devoted husband Chris is a contract lawyer. They love each other dearly and they are desperate to have a child. They’ve been trying without success; Mara has miscarried three times. Now pregnant again, they learn that the fetus Mara is carrying has a seriously impairing genetic disease. In shared sorrow they make the agonizing decision to make the drive to Sioux Falls.

Mara’s trimester of the storyline is written and played as soap opera for grownups. The writing, not at all maudlin, is astute and truthful. The characters’ concerns are expressive of honesty and affirmation in mature love. We get to know two individuals vividly and we feel their pain. Allyson Harkey brings to Mara both sensitivity and grit. Seth Alcorn brings to Chris both a sturdiness and vulnerability. The play is never more heartbreaking than during their second-act scene in a hospital room, when their grief peaks and the bond between them seems never more secure.

Annabelle is a young woman who is delusional; she has three imaginary companions who are…mermaids (Disney’s The Little Mermaid made a big impression). She is also a battered wife, escaping with her life on a bus to Sioux Falls. The relationship between her abuse and her delusions emerges gradually. Her narrative is sobering and saddening, also often mystifying. Mostly we get to know her as a naïf, a woman who, kept isolated by a man she calls a monster, lacks any information or support that could save her, so she seeks survival in her own dream.

Annabelle’s poignant trimester of the storyline is written and played as magical realism. Thus it includes, peculiarly, expressionistic choreography featuring three Mermaids—Alana (Ali Evarts), Adella (Jennifer Hopkins), and Attina (Bianca Lipford), dressed in tights and shiny green skirts. It’s not clear till the end who they are or why they’re there, although between scenes they function handily to change set pieces. Mo O’Rourke’s brings to the role of Annabelle a touching simplicity and innocence along with a tremulous sense of being imperiled; she’s so watchable it hurts. And Dominy’s writing for Annabelle and her Mermaids reaches for a poetry of emergency and escape. But these passages, despite being ably performed, never cohere nor propel the play with the same clarity and impact that Kat’s and Mara’s narratives do.

Where the play really shows its stuff is when the three women’s stories coincidentally intersect. Mara and Kat have a scene together in a car that is stunningly written and performed: a knock-down confrontation between women of two different generations, the elder’s grievances against the younger on devastating display. And Kat and Annabelle have a scene together at a lake that is also beautifully written and acted: a moving depiction of one woman’s reaching out in sisterhood to rescue another.

Director Rachel Murray keeps the action in motion while focusing attention on the play’s many telling moments. Each of the Mermaid players doubles in other more naturalistic roles: Evarts as a pregnancy counselor and a clinic receptionist, Hopkins as a doctor, Lipford as another doctor and a nun. These parts they perform with uniform excellence.

Though the childlike magical realism in Sioux Falls lacks the persuasive appeal of its wonderful millennial rom-com and its profound mature melodrama, the scope of the play’s significance and the eloquence of its content far exceed the sum of its parts.

Meghan Dominy’s Sioux Falls is well worth a visit. It speaks from three hearts whose reasons male legislators know nothing of.

Running Time: Two hours and 25 minutes, including one intermission. 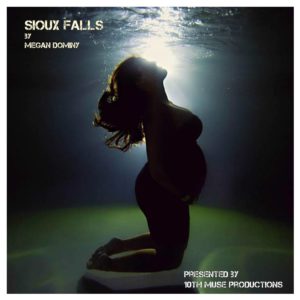