Packed with pizazz, energy, and downright sizzle, A Chorus Line, as performed by Tantallon Community Players (TCP) and directed by Christopher Gerken, is the MVP of musicals on DC area stages this year. With music by the late Marvin Hamlisch, lyrics by Edward Kleban, and book by James Kirkwood and Nicholas Dante, the show is somewhat of a Hamilton of generations past, centering around 17 auditionees for a fictional Broadway show.

Add to the aforementioned stack of talent, Choreographers Debbie Clark and Rikki Lacewell (who was in TCP’s Dreamgirls last year), the Vocal Direction of Charla Rowe, and the Musical Direction of LeVar Betts, and you’ve got a musical of magnificence.

The show began with show-within-the-show warm ups by the eclectic cast. Using the literary conceit of Zach the Director (Gerken), addressing the cast from behind the house, Zach encouraged the auditionees to “Talk and be yourselves.” Mike (Jonathan Jackson) started dancing because of his sister. Bobby (Mark Allen) was from a monied family with no class. Sheila (Amanda Dees) wanted to be a ballerina. Kristine (Kandace Foreman, also from Dreamgirls) couldn’t sing. Cassie (Tammy Roberts) hadn’t worked in two years. Paul (Niko Granados) had a past life as a drag queen. 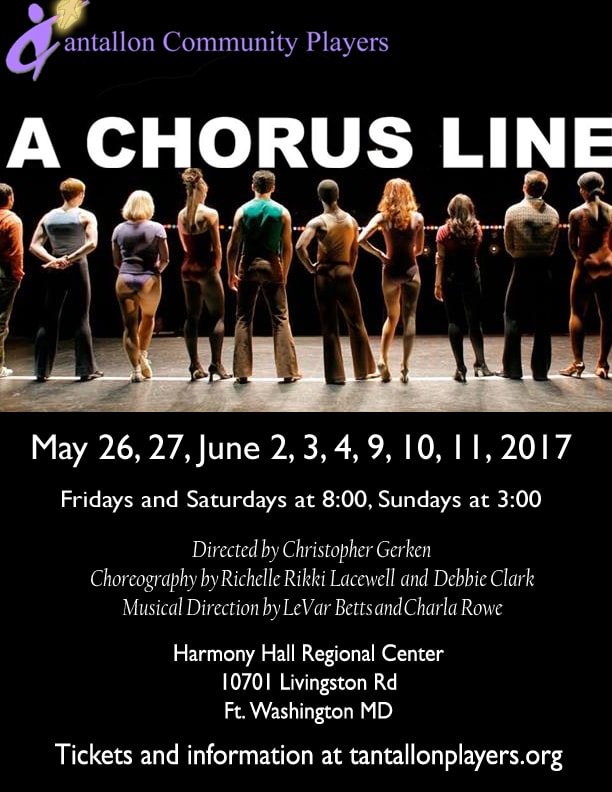 If the fictional auditionees had doubts, the actual performances of the song and dance numbers were all done with excellence. “I Hope I Get It” by the Company had a high energy. Jackson’s “I Can Do That” showed off his commanding vocals. Jory Holmes, as Ritchie, stood out in “And.”

The harmony between Bebe (Andrea Gerald) and Maggie (Brittany Caldwell) was amazing in “At the Ballet.” Foreman excelled in “Sing!” As the characters spoke about their pasts, the musical went into a four-part montage, the first of which, “Montage, Part 1: Hello Twelve” featured the wonderful singing of Mark (Angelo Cline) and Connie (Alani D’Lawren). The dazzling Tahara Robinson as Diana soloed fantastically in “Montage, Part 2: Nothing.” Parts 2 and 3 of the montage featured the Company’s dynamic dance steps.

The curvy Val (Sarah Jones) was hilarious in “Dance Ten; Looks: Three” in a song about using sex appeal to get hired on Broadway. Roberts’ acting was superb and her vocal range terrific in the scene that included “The Music and the Mirror.”

“One,” by the Company, was dynamite. Robinson again showed off her superior vocals in “What I Did for Love,” as did Dees and Caldwell.

The acting was spot on throughout. Granados’ monologue about finding salvation in dance as a gay teen was powerful. Roberts’ fading, out-of-work dancer Cassie was a well-formed character. I liked the supporting dancers, some of whom were let go from the audition-within-the-show early on, including Kristen (the amazing Kristen Briscoe, seen in last summer’s Capital Fringe show Cake! ), Jaden (Foreman’s daughter Jaden), Vicki (Katrina Jackson) and Ray (Rebecca Benzion). The costumes were quasi-70s; Holli Goral and Elaine Sullivan veered toward an aerobic look for the cast. The standing ovation A Chorus Line received proved it is a sparkling spectacle of musical fun for musical lovers everywhere.

A Chorus Line plays through June 11, 2017, at Tantallon Community Players performing at the Harmony Hall Regional Center – 10701 Livingston Road, in Fort Washington, MD. For tickets, call the box office at (301) 203-6070, or purchase them online.