We all need a good laugh these days – not a snicker or a snarky smile. A series of side-splitting belly laughs that leave you exhausted and smiling.

See How They Run aptly named for the nursery rhyme song about the “Three Blind Mice,” is the perfect antidote for a week of deadlines, spreadsheets, IT screw-ups, alternative news, and messy office mates.

See How They Run, written by Philip King and directed by Tyrone Chapman, is hilarity on wheels – amply greased with plenty of cheap cooking sherry.

It is playing at the Vagabond Players Theater in Fells Point and, during this, its 101st year, is the final production of America’s oldest continuously operating little theater.

This show is a Chapman family affair – four members have been involved in numerous area theater productions. The director’s wife Dawn Chapman was cast in the lead role, the second time she has portrayed this character. Their daughters are involved too: Shelby Chapman is the assistant director and Dorian Chapman is the light and sound technician. Kudos all.

The casting is diverse – and it works. Some of the comments and commands, from an upper class Englishwoman to a servant, take on an added layer of meaning when the servant is African-American.

All the action – there’s lots of it – takes place in a stuffy, Victorian living room of the local vicar, an Anglican minister in the equally stuffy-sounding English village of Merton-Cum-Middlewick.

Originally written as World War II was just starting – for Americans – in 1942, the rewritten version staged for today’s audiences is set in post-WWII England.

In this mid-1940s setting, though the Yankees helped win the war, some still Brits think the Americans are too loud and brassy, too progressive and not well-mannered. The town gossip, a nosy spinster named Miss Skillon (Summer Austria) who has an unrequited affection for the town’s young vicar, Rev. Lionel Toop, drops by unannounced and, really, unwelcome at the vicarage.

She walks into the room through one of five entrances and makes it clear she’s not happy either. The vicar’s wife, Penelope Toop (Dawn Chapman) is singing off key and off stage. Loudly. Even the audience is cringing.

The living room she’s waltzed into, well designed and constructed by Bush Greenbeck, is an elegant room built with natural-looking wood beadboard beneath the high chair rails, an ornate mantel and a staircase that winds out of sight on stage left. Atop the stairs, staring down at the goings-on is a print of Francisco de Goya’s famous “Boy With Cats,” set in a heavy, gilded frame.

At the center of the stage is an upholstered loveseat with wooden trim and a matching highback armchair. A low coffee table is set with a silver plate tea service and china cups and saucers. Off to one side of the mantel is a sideboard filled with crystal decanters and cups. Guess which gets more use?

Miss Skillon snoops around, decides the furniture is too dusty to sit on and is in a bad mood.

The ditsy, Cockney maid Ida (Timeeka Addison) is the first to come into Miss Skillon’s line of fire. She brusquely and rudely orders the maid around, telling her to take her bicycle and put it into the garage. Ida is not to mount the bike, merely walk it around the house to the garage. “Please” is not part of her vocabulary. (Ida, in response, winds up “accidentally” puncturing the tires.)

Miss Skillon anxiously awaits the arrival of the vicar. She wants nothing to do with Penelope – and the feeling is icily mutual.

When he arrives (Thomas Peter), she unleashes her annoyance that “someone” (Penelope) has decorated the pulpit, something she’s done for years. It’s her turf. She makes it clear that Penelope is an interloper who’s taken the guy she had her eyes on – and has the bad manners to wear trousers in town and wave at strange American soldiers who are merely driving by. A scandal!

Penelope, the American, was born in Britain and played during her childhood years, with Rev. Toop. Her family moved to America, she became an actress and, traveling with a USO Troupe during the war that performed the Noel Coward’s popular 1930 hit comedy play Private Lives, she returned to England – and was reunited with her old childhood pal. They’ve been married a year.

As Dawn Chapman portrays Penelope, she is weary of the comments by townspeople that she is not suitable to be a vicar’s wife. She loves her husband and is trying to blend in – on her terms. Her accent remains American.

Miss Skillon is taken aback to discover Penelope’s uncle is a Bishop (a striking Loring Cornish), due to arrive for the Harvest Festival happening the next day.

Rev. Toop has another commitment that evening and departs as do Ida and Miss Skillon – for a while.

A surprise arrives: U.S. Army Corporal Clive Winston (Justin Johnson),a fellow USO actor with whom Penelope had performed in Private Lives. The show is notable for its frequent verbal and physical battles between two couples.

He’d seen her in town, waved at her, discovered where she was living and dropped by to renew the friendship.

Ida lets him in and gets an instant crush on the handsome guy with a wide smile.

A version of Private Lives is playing that night in a nearby village and, once Ida has left the room, they start to make plans to attend. Only, the young corporal can’t go outside limits set by the Army. Penelope’s solution is to dress him in her husband’s “second best” suit complete with the clerical “dog collar.” She suggests he pretends to be another vicar, Arthur Humphrey (Archie D. Williams, Jr.), who is scheduled to preach the Sunday sermon in Rev. Toop’s stead, the next morning.

Thrilled to be together again, they start reminiscing about their onstage flubs during a fight scene from Private Lives. Fists start swinging and flying.

They don’t hear Miss Skillon re-enter the room. Thinking her dear, beloved vicar is being beaten by his dreadful, horrible American wife, she attempts to intervene – and you can only imagine what  happens to her.

Penelope and Clive – who has a congenial personality that warms up the audience – don’t see or hear her.

During the evening, more people arrive.

The Bishop – who has a flair for rhinestone bracelets and necklaces – arrives in a regal purple cassock. He’s not supposed to arrive at the house until after the Harvest Festival service in the morning. His plans changed. He changes, too – into a fur stole lavished satin brocade smoking robe.

Here’s my one complaint of the evening. The Bishop’s purple cassock would have looked a lot more regal if someone on the costume crew (Suzanne Pratt, AT Jones & Sons, and Mary Bova) had ironed or steamed it before show time. Its “just out of the box” creases and wrinkles were distracting – as were those in Cpl. Winston’s military pants.

He’s not the evening’s only visitor. Things heat up and become more and more confusing – and wildly amusing – with the arrival of The Intruder, a Russian spy (Rob Vary with varying accents) who’s escaped from prison, followed by the real Rev. Arthur Humphrey and Sergeant Towers (Bruce Levy).

When Rev. Toop arrives home, a merry chase involving most of the characters and making ample use of all the doorways.

Um, except the closet. Though one character is led to believe the noise coming from the closet is a little kitty, it is the purr-fect spot to stash unwanted house guests.

The show had some glitches that only added to the hilarity of the production on opening night: at a pivotal moment, a key piece of furniture fell over. The actors remained in character incorporating the accident into their banter as they picked it up and collected the scattered props.

Then, it fell over again.

The audience shrieked with laughter.

(The program states there is a 15-minute and a 10-minute intermission, but the only intermission occurred after Act II.) 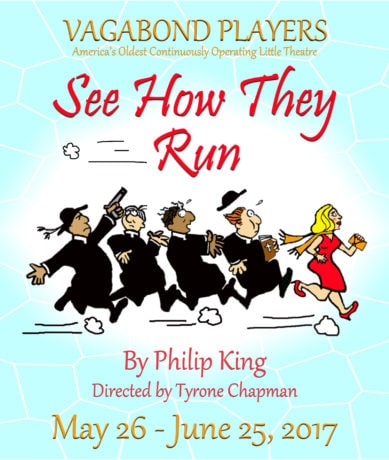 See How They Run plays through June 25, 2017, at the Vagabond Players – 806 Broadway, in Baltimore, MD. For tickets, purchase them online.