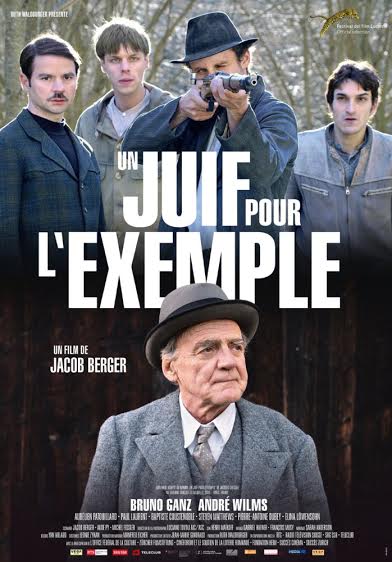 I have seen many World War II films that focused on either the battles that were fought, or the horrors of the Holocaust. Only a small number of films touch on the level of extremism exhibited during this time. Jacob Berger’s A Jew Must Die is one of these films, a chilling tale of violence and hatred in what was believed to be a neutral territory during the war.

Switzerland 1942. A group of Nazi sympathizers want to do something special to commemorate Adolf Hitler’s upcoming birthday. They decide to select and kill a Jewish citizen as a scapegoat for the “sins of Israel.” The citizen they choose is a well-known livestock dealer, Arthur Bloch (Bruno Ganz). At a local cattle festival, the extremists lure Bloch into a barn under the pretense of selling him a cow. They kill him and dismember his body. The crime is witnessed by a local boy who grows up to write a book about the incident.

Based on Jacques Chessex’s novel of the same name, the film is a real eye opener into the world of extremism. Some of the scenes are quite unnerving and makes you question how people can commit crimes such as Bloch’s murder with such heartless abandon. Other scenes are equally disheartening such as the extremists choosing their victim by shooting at a target with pictures of Jews attached to the back and Swiss soldiers scaring Jewish refugees from entering the country. The film is made even more effective by Manfred Eicher’s excellent musical score which adds suspense and dread to certain scenes and sadness to others.

The standout performance of the cast comes from Aurelien Patouillard as Fernand Ischi. Fernand is the owner of an auto garage and is also one of the prominent Nazi sympathizers. Patouillard is outstanding as the heartless extremist. He is obsessed with impressing Hitler, so much so that he even adopts Hitler’s look. He is also shown to be an adulterer who beats his mistress and doesn’t care how the situation affects his wife. Patouillard does a good job, as well, to portray Fernand’s fearlessness when he pulls a gun on a soldier and also during his arrest for ordering Bloch’s murder. This is a character that audiences will instantly loathe, thanks to Patouillard’s excellent turn.

Several scenes set during the 1942 story feature elderly Jacques Chessex (Andre Wilms) witnessing events as if he was still a child. These scenes are quite compelling, made possible by Wilms’ impressive performance. You feel the pain expressed in Chessex’s eyes as he relives this terrible crime. The opening of the film features a radio interview with Chessex interrupted by callers criticizing his book about the murder. Chessex sits in a small booth as he is bombarded by the criticism and you feel how overwhelmed he is to hear people accusing him of capitalizing on other people’s misery.

The only distracting about the film is its inclusion of modern day vehicles in the 1942 setting. If this was done for artistic reasons, it was a little strange watching people in 1942 driving cars from 2016. Also, the Swiss police are dressed in modern windbreakers and baseball hats. This does not, however, take away from the overall effectiveness of the film.

A Jew Must Die is quite unnerving, but that’s what makes it work. The great performances by its cast, the excellent score, and effectiveness of its scenes make for a haunting film and one that audiences should see.

The Washington Jewish Film Festival  will have its final day of screenings Tomorrow, May 28, 2017, at AFI Silver Theatre, Bethesda Row Cinema, E Street Cinema, Edlavitch DCJCC, National Gallery of Art, and TWO JEWS WALK INTO A BAR (And a Deli). For tickets, purchase them either at the theater box offices or online here. You can also find a schedule and further information of the remaining films in the festival here.

LINKS:Washington Jewish Film Festival Reviews by Andrew Markowitz. Watch the trailers for all the following films: