Memorial Day this year coincided to the day with the 100th anniversary of the birth of President John F. Kennedy. To commemorate the occasion, The Kennedy Center put on a full weekend of events, including (In)Security: Or, Jack and Nikki Do the Cold War Tango, commissioned by The Kennedy Center from Company | E, a dance company that pursues a mission of cultural diplomacy through the arts.

The Cold War Tango is a multimedia ballet, conceived, written and directed by Company | E Co-Artistic Director Paul Gordon Emerson, with new music by Gavin Stewart mingled with existing US and Russian songs, and audio and video clips of speeches by Kennedy and Soviet Premier Nikita Khrushchev.

Cold War Tango employs dance to explore the most perilous days of the Cold War and the diplomatic and political interactions between Kennedy and Khrushchev. Using The Kennedy Center’s vast Grand Foyer to connect the North and South Millennium Stages, The Cold War Tango tells the story simultaneously from the Soviet perspective (South Stage) and US perspective (North Stage). The result is a creatively constructed, thought-provoking reminder of the most heated days of the Cold War, which coincided with Kennedy’s presidency.

Upon entering the Grand Foyer, one is struck not only by its beauty, but also its size; the massive length of lush, red carpet soon becomes a metaphor for the physical and psychological space between the US and Soviet Union during The Cold War. No seating is offered to viewers of this performance. Instead, audience members are invited to wander between the stages and view the program from all angles. The dancers, we are informed, will utilize the wide expanse between the stages as geographic points of conflict: Cuba lying closer to the US stage, Berlin to the Soviet stage, and an elevated stage smack in the middle which I assume represents the 1961 Vienna Summit where Kennedy and Khrushchev attempted to hammer out some of their disagreements.

I’m a contrarian, so of course I started viewing the show from the Soviet side. With the Soviet stage illuminated in red, the dancers began their first routine in colorful pre-revolution peasant costumes which were soon replaced by drab, monochromatic Soviet style uniforms. A large video screen above the stage broadcast the American dance performance taking place across the hall, allowing me to see that on the blue-lit, US stage, the “American” dancers were expressing the post-war exuberance that followed the end of World War II (lighting by Ari Korb and Owen Burke, costumes by Marija Djordjevic).

After their initial dances, the US and Soviet performers descend from their stages and perform in various locations around the foyer. Audience members intermingle with but never distract the focused dancers. Speeches by Kennedy and Khrushchev accompany their movements. I try to recall the history of the era to follow the chronology of the dances. Now I think we are in Berlin, perhaps now in Laos.

The dancers from East and West move ever closer together, Soviet and US dancers following their respective leaders in a reminder that, although these days were the most heated of the Cold War, both countries were led at the time by men who tried to find a common understanding and avoid conflict.

Kennedy and Khrushchev (danced by Ryan Carlough and Arman Bayev) meet and ascend the small stage in the center of the foyer, mere feet from the giant JFK bust that overlooks the daily proceedings of The Kennedy Center. A well-choreographed physical battle ensues. Half dance, half stage combat, and entirely evocative of the passions and frustrations that characterize high-stakes diplomacy. No dialogue is necessary to understand that we are watching two leaders attempt to bridge divides and duke it out for their nation’s perceived best interest. The dance ends with no victor, but both men shake hands and smile for the cameras before retreating with their entourages back to their corners of the globe.

Building blocks begin to appear in front of the US and Soviet stages. The US dancers use their blocks to construct a large cube. The Soviets? A wall. Audience members who chose the Soviet side are now figuratively trapped on the wrong side of the wall, scratching their heads or nodding in appreciation of the conceit as they figure out a path of escape. One by one, Soviet dancers begin to peel off and cross hypnotically toward the West, symbolizing the numerous defections that occurred from of the Soviet Union.

Tensions mount as rumbling incidental music signals a climax of some sort. From my vantage point behind the Berlin Wall, I see on the large screen that the Cuban Missile Crisis must be underway on the other side of the Foyer. Heavy percussion and use of synthesizers indicate an escalation of conflict as Soviet and US dancers face off in a series of jagged, high-intensity movements. It is a well-choreographed climax.

Both sides retreat once again to their camps, the Americans looking rather shell-shocked, the Soviets glassy eyed and robotic as we hear first in Kennedy’s English words and then Khrushchev’s Russian, that a resolution has been achieved.

Throughout the performance, the pulsating and rhythmically intense original score by Gavin Stewart blended with dance to highlight the emotional struggles of Kennedy and Khrushchev’s political relationship and the effects of this global conflict on the citizenry of the two nations. The recorded music was enhanced by live performances by Violinist Wanzhen Li and Soprano Michele Fowlin.

The interactive nature of the show added to my enjoyment. I traversed the expanse of the foyer from American to Soviet side a few times while watching. It took a good while to get from one side of the foyer to the other and as I walked, I worried that was missing part of the performance, getting only glimpses of each side’s perspective. Then it dawned on me that this is exactly what diplomacy is – trying to understand two sides of an argument while only able to take in glimpses of the other side.

Through its creative use of dance, space and music, Company | E has developed an evocative and immersive recreation of one of modern history’s most perilous and fascinating time. The unique staging at The Kennedy Center gave spectators a chance to feel the difficulty inherent in communicating across ideologies and borders. 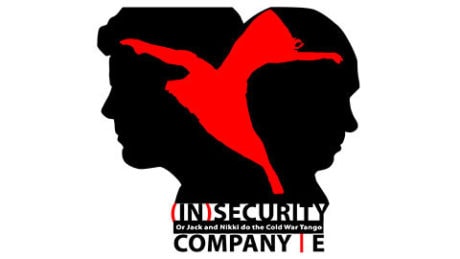 (In)Security: Or, Jack and Nikki Do the Cold War Tango played on June 26 and 27, 2017, at the Millennium Stages at The Kennedy Center – 2700 F Street, NW, in Washington, DC. For information on future events, go online.