Shimmy into your chainmail and grab a broadsword, there’s an awesome campaign starting at Audrey Herman Spotlighters Theatre (Spotlighters) and they’re still looking for adventurers for their party. Spotlighters’ penultimate production of the season, Playwright Qui Nguyen’s AATE Distinguished Play Award-winning She Kills Monsters, will bring out (or help you discover) your inner geek.

She Kills Monsters tells the story of Agnes Evans, a 20-something school teacher who, while packing to move from her childhood home to an apartment with her boyfriend, finds a “homespun module” written by her Dungeons and Dragons (D&D)-loving teenage sister, Tilly. Modules are kind of like an owner’s manual. They provide the Dungeon Master – the director/referee/god of the adventure – with a description of the fantasy world, some backstory, a framework of action, and a quest or quests to be accomplished by the players. Regretting she’d never been close to her kid sister when she was younger, Agnes decides to play the module as a way to get to know Tilly better.

Local comics shop owner, Chuck “DM” Biggs, played by the geekariffic Michael Crook, agrees to be Dungeon Master and the adventure begins. The play alternates between 1995 Athens, Ohio and the fantastical New Landia, the setting for Tilly’s “Quest for the Lost Soul of Athens.” Despite some silly outbursts of sibling bickering, Agnes does learn more about her sister and, in the process, meets some of Tilly’s D&D and “real life” friends. The play is wall-to-wall comedy, featuring unexpected situations, goofy fish-out-of-water misunderstandings, and a healthy smattering of fantasy/role playing double entendres.

Rachel Verhaaren plays big sister/D&D newbie, Agnes. Bouncing back and forth between worlds, Verhaaren ably displays Agnes’s increasing indifference toward mundane Reality and her growing enjoyment of adventuring in New Landia. She and Lanoree Blake, who portrays Tilly, have some funny, realistic-sounding sibling spats:

Agnes: “Why are you wearing armor?”
Tilly: “In case I have to battle.”
Agnes: “Battle what?
Tilly: “Your face!”

Blake’s Tilly is delightfully sassy. D&D is her game; New Landia is her world; and there, unlike in Reality, she’s a Level 20 badass: Tillius the Paladin. Blake capably displays the smoldering teen angst of a gaming geek who feels most comfortable with fellow social misfits in the alternate realm of fantasy, where they rule.

Tilly’s party includes two other warrior women. Lilith, well-performed by a confident Danielle Shorts, is a sexy Demon Queen with a thing for violence, and Kaliope, a dexterous Dark Elf with myriad skills, is deftly portrayed by Amanda Harris.

In New Landia, Agnes meets an array of other fantasy folk. The party first encounters Farrah, a stereotype-busting faerie with a foul mouth and fouler temper, ironically played by Andrea Bush (who does double duty as the show’s eloquent narrator, as well). They cross paths with the fortune-seeking Great Mage Steve, amusingly acted by genial Baltimore City College 9th grader, Sam Cure, as well as with the meanest set of mean girls since Heathers, Zoe Lunga and Claire Iverson, as Evil Gabbi and Evil Tina, respectively.

Stealing basically every scene he’s in, Stephen Edwards is hilarious as the Overlord of the Underworld, Orcus. IRL, Edwards sounds like a creative, driven smartguy (he works with robots!), but as the completely red, horned demon, Orcus, he’s a bigger slacker than Ferris Bueller on, well, his day off.

Back in Reality, Agnes has the support of the other adults in her life. Peter Daly plays Agnes’s marriage-reluctant boyfriend, Miles, with humorously reactionary cluelessness. Entertainingly straight-faced Tina James rounds out the cast as Vera, Agnes’s best friend and a comically bad high school guidance counselor.

The set for She Kills Monsters was designed by Scenic Artist Alan S. Zemla, who also constructed an impressive five-headed dragon out of what looks like multi-faceted, modular origami. Fuzz Roark was responsible for the multi-location set’s construction and Sherrionne Brown designed a stage floor that looked like part of a map from a classic D&D module. Al Ramer’s lighting design enhanced the visual appeal of the set, as well as clearly marking the end of each scene with a brief blackout.

Costumer Design Lanoree Blake (Tilly!), assisted by Lucy Ross, did a great job outfitting the cast. The New Landian attire was well done in the leather and chainmail motif one would expect and the 90s-era Reality clothes were spot-on. Loose floral dress under a jeans jacket, flannel tied around waists, Doc Martens… the only thing missing was a Nirvana t-shirt.

The flashback fashion complemented the gracious plenty of 90s references throughout the script. Popular cultural phenomena like the TV shows Quantum Leap and E.R. and songs like Beck’s “Loser” and the earworm “Kung Fu Fighting” – courtesy of Sound Designer Stephy Miller – had the effect of anchoring Reality in a particular place in time. Down to the details of the props – Tilly’s module, for example, is housed in a genuine Trapper Keeper – the whole show was like a nostalgic cup of pennyroyal tea.

Fuzz Roark and Spotlighters rolled high for Intelligence when they decided to stage She Kills Monsters, Qui Nguyen’s romp through the world of role playing gaming. And kudos to Director Stephy Miller, who used her high Constitution to lead a talented cast and creative team in making this love letter to geekdom (girl geekdom!) a sassy success at Audrey Herman Spotlighters Theatre. Head on down to Spotlighters to experience the magic and mayhem for yourself!

She Kills Monsters plays through June 18, 2017 at Audrey Herman Spotlighters Theatre – 817 St. Paul Street, in Baltimore, MD. Tickets may be purchased at the box office or online. 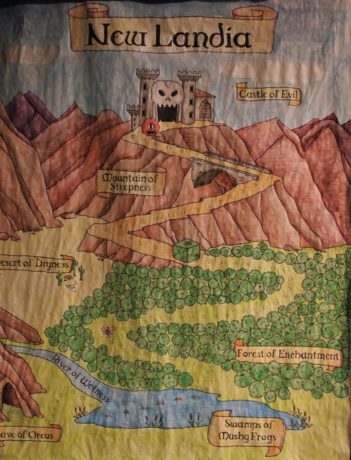