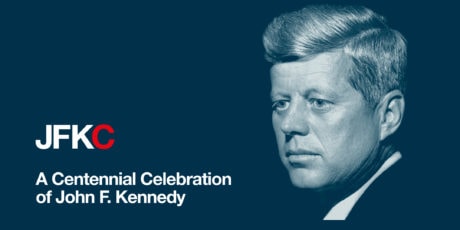 The John F. Kennedy Center for the Performing Arts (The Kennedy Center) paid elegant tribute to the legacy of its namesake in A JFK Centennial Celebration on May 29, 2017, the 100th birthday of our nation’s 35th president. Memorial Day, which commemorates those who have given their lives for this country, was perfect timing to remember a man whose passionate idealism forever raised the stakes as he challenged all Americans to fulfill his hopes and dreams for a better world. The Kennedy Center, now in its 45th year, has been a living memorial to the spirit of JFK. Under the direction of Gregory Mosher, this ambitious centennial celebration presented a lofty program of readings from Kennedy’s speeches, with musical performances and rare video footage by some of America’s finest performers.

Beginning back in May 2016, The Kennedy Center started commemorating the 100th birthday of JFK with performances by some of the world’s most renowned artists, such as Yo-Yo Ma, Common, Joshua Bell, and Alvin Ailey American Dance Theater, among many others. Its Memorial Day program was part of JFKC: A Centennial Celebration of John F. Kennedy and culminated The Kennedy Center’s year-long celebration.

Under the direction of Nolan Williams Jr., his choir sang “Give Me Your Tired, Your Poor,” “My Country ‘Tis of Thee” and “America, the Beautiful,” which opened the program with soaring solos that lifted the spirits to the momentous occasion.

A video welcome by the ever-popular Mrs. Michele Obama, an honorary chair of The Kennedy Center, brought immediate cheers from the audience. She highlighted the work of The Kennedy Center and its mission, as envisioned by John F. Kennedy and his family when he said, “I am certain that after the dust of centuries has passed over our cities, we too, will be remembered not for the victories or defeats in battle of politics, but for our contribution to the human spirit.”

David M. Rubenstein, Chairman of the Board of Trustees of The Kennedy Center, spoke about the center’s recent Building the Future fundraising campaign for educational arts programming, which, over 35 days, successfully raised $1.2 million – 87% of its goal. The new building expansion is set to open in 2018 with three new pavilions.

The panel of outstanding performers used the words from JFK’s own speeches as a platform to exalt the five ideals that JFK valued the most: Courage, Freedom, Justice, Service and Gratitude.

Their readings were glimpses from some of JFK’s most important messages during his 1,000 days in office and included: his famous inaugural acceptance speech on the steps of the US Capitol; video clips from his first live, televised press conference on January 25, 1961; a State of the Union speech to Congress; his speech along with Jackie Kennedy at the cultural center dinner which set the stage for the creation of The Kennedy Center; a Harvard Commencement Address; and speeches given at Amherst College, Berkeley College, and American University, which was arguably his most important speech on world peace.

JFK’s words presaged many of the trigger points that America is still grappling with today. And the ideas expressed through the readings brought instantaneous and passionate audience reaction to some of the hot button issues we still confront today: protection of freedom of the press, freedom of religion, the inclusion of immigrants, the need for diversity in America, the road to equal pay for women, the preservation of civil rights and human rights at home and abroad, the perils of ideological extremism, and the continuing quest for world peace.

The words of JFK touched a raw, open nerve about how far America has come – and fears about the future and the undoing of the progress we’ve made – as we stabilize and solidify a future which fully recognizes, in his words, that “we are all mortal, and we all breathe the same air.”

Dancers Tiler Peck and Joaquin De Luz of the New York City Ballet performed a briskly patriotic “Stars & Stripes” Pas de Deux with intense fervor and palpable love of country. Chris Jackson sang “Lift Every Voice and Sing,” the Negro National Anthem, as part of segments on the civil rights movement, along with video clips from JFK’s desegregation of the University of Alabama.

One of the most memorable video clips was JFK’s remarks in the Rose Garden of the White House to the very first group of Peace Corps Volunteers, which marked JFK’s creation of the Peace Corps in response his inspiring call to public service.

Musical performances by Taylor Mac, accompanied by Jason Moran on “Hard Rain’s Gonna Fall,” and the closing musical performance of “Move On,” sung by Claybourne Elder and Jenni Barber, sent a prescient message about the challenges of change and hopes for a better future for all.

To further explore the “Legacy of Idealism” of the JFKC: A Centennial Celebration of John F. Kennedy, these award-winning websites tell stories of special events and performances by artists who embody and embrace JFK’s legacy, as well a virtual tour of online exhibits on Google Arts and Culture of the Kennedy Center’s halls, theaters and interactive Street Views.

Commendations go to The John F. Kennedy Center for the Performing Arts for its zealous commitment to the arts as it continues to serve the world community through artistic presentations of traditional, as well as emerging, art forms and arts education.

The Kennedy Center embodies the ideals of John F. Kennedy, which he so eloquently expressed in his final State of the Union address: “to further the appreciation of culture among all people… to increase respect for the creative individual, to widen participation by all the processes and fulfillments of art – this is one of the fascinating challenges of these days.”