Cohesion Theatre Company (Cohesion) is closing its third season with playwright Jaclyn Backhaus’s historical adventure-with-a-twist, Men on Boats. It’s a funny play that is likely to prompt interesting ‘on the car ride home’ discussions. And it sneaks in a small history lesson about Manifest Destiny and Westward Expansion so smoothly, you probably won’t even notice you’re learning things.

Men on Boats recounts the story of the ten stout-hearted men who embarked on the Powell Geographic Expedition of 1869 – the first governmentally-sanctioned exploration and mapping of what we now call the Grand Canyon. With four wooden boats – Maid of the Cañon, Kitty Clyde’s Sister, No Name, and the Emma Dean, named for Powell’s wife – the adventurers rode the rapids, navigated white water, and climbed giant rock formations. After returning home, expedition leader John Wesley Powell wrote what came to be known as The Exploration of the Colorado River and Its Canyons, a book based on his meticulous notes and journals from the trip. These writings provide the factual framework for Backhaus’s play and provide insights about the men who undertook this historic journey.

The most obvious thing that sets Men on Boats apart from other reenactments of the Powell Expedition is an instruction from the playwright. Backhaus explicitly states in her script that each role in Men on Boats is to be played by an actor who does not identify as a “cisgender white man.” Hearing cis white men’s lines – sometimes quotes or paraphrases of Powell’s own record – from the mouths of women, people of color, and gender non-binary actors, is thought-provoking. The privileged worldview contained in the lines is put into sharp relief when spoken by those who enjoy no such privileges.

Another unexpected, but effective, feature in this production is the juxtaposition of anachronistic, 19th century male sensibilities – manifest destiny and the superiority of the white race among them – and the 21st century language of the play. The actors do a fantastic balancing act; they are believable as strong, rough and tumble adventurers, yet they often sound modern in language, manner and intonation.

Director Katie Keddell elicits excellent performances from the ensemble cast of Men on Boats. Each of the ten characters has a strong personality. Under Keddell’s leadership, the actors skillfully imbue the explorers with consistent physical and vocal characteristics that make them all individually memorable.

Bethany Mayo portrays Major John Wesley Powell, the leader of the expedition, with confidence and swagger appropriate for his stature and success. Mayo adeptly shows Powell to be a courageous leader who, perhaps alone, understands the true historical significance of what they are doing.

Cori Dioquino, as William Dunn, displays overt ambition – second-guessing Powell, wanting to name everything after himself, calculating odds of survival – that is applauded in men, but reads quite differently from a woman. The contrast invites you to examine cultural norms and consider whether something that seems pushy or inappropriate from a woman should really be lauded in men.

Logan Davidson plays William Hawkins, the cook for the expedition. They manage to maintain a rugged, ‘shot a man in Reno just to watch him die’ vibe even when participating in physical comedy that has the audience in stitches. Hawkins’s best buddy in the expedition is boat-mate Andrew Hall. The two have the best handshake ever.

Charmingly performed by Alice Stanley, Hall, the mapmaker, is the youngest adventurer in the party. Stanley’s portrayal communicates Hall’s youth and enthusiasm without resorting to any of the fake machismo young men affect when trying to be taken seriously by older men. To the contrary, Stanley’s agendered approach to the character gives him permission to express an almost giddy kind of excitement about the voyage. And their comedic timing is spot-on.

Martha Robichaud, as George Bradley, grants her character that same freedom. Bradley is refreshingly enthusiastic, earnest, and up for anything. In Robichaud’s fine performance, we see a level of excitement that men are usually robbed of in our society because it’s been drilled into them since childhood that it’s not masculine to express joyful emotion or geek out over things. Notably, this eager-beaverness does not make Bradley’s heroism hard to believe; it may, in fact, enhance it.

Like Alice Stanley, Caitlin Carbone is an actor with outstanding comedic timing. Her character, Seneca, is the brother of Oramel “O.G.” Howland, played by the delightful Utkarsh Rajawat. Each a fine actor on their own, cast together as siblings they become a whole that is even greater than their parts. Carbone and Rajawat demonstrate a connection that feels genuinely familial. The pair also play a couple of Ute Indians who respond hilariously when the Powell party arrives demanding supplies and accommodation.

Justin Lawson Isett and Emily Classen give strong performances as Walter “Old Shady” Powell (John Wesley’s brother) and John Sumner, respectively. Both play veteran adventurers with no-nonsense, professional demeanors. Plus, they’re good singers. Men on Boats is not a musical, but the travelers sing a few songs along the way – particularly Isett’s Old Shady, solo, to pass the time. And during an all-explorer song celebrating the wonder that is whiskey, Classen’s voice rises above, beautiful and clear.

Rounding out the cast is Jane Jongeward, playing Frank Goodman. Jongeward is great as the affluent Englishman who joined the party for a bit of adventure. They display both his desire for novel, exhilarating experiences and also his nostalgia for more comfortable journeys in his past.

Cohesion Co-Founder/Co-Artistic Director Brad Norris is a go big or go home type of Scenic Designer. The set for Men on Boats is like an eleventh character. I stopped short, entering The Fallout Shelter, and took it all in. The audience is on the floor of the Grand Canyon with the Powell party, next to the river. Yup, he built a river. Norris is full of awesome and must be one of the funnest dads ever. If he can build the Grand Canyon, imagine what he can do with a pillow fort.

Max Garner’s sound design is perfect for adventure. His whimsical use of the themes of Magnum, p.i. and Indiana Jones wonderfully match the action-packed, humorous production. Likewise, the work of Lighting Designer Lana Riggins and Costume Designer Jess Rassp does a lot to contribute to the show’s success.

With its ambitious scale, epic story, and gender fluid casting, it’s like Men on Boats was custom-made for Cohesion. The company has a history of producing visionary, often resource-intensive works (i.e. Neverwhere, Hamlet) and works advancing the understanding and acceptance of people for whom gender identity isn’t as simple as checking the “M” box or “F” box on a form (Aphorisms on Gender, The Trans* Voices Workshop Series).

Whether they’re rowing their boats in unison or fighting over the dwindling tobacco supply, at the end of the day, the characters – and the cast – of Men on Boats work as a team. Playwright Backhaus’s directive for non-cis white male casting adds an extra dimension to the men of the Powell Expedition. It allows the audience to more easily identify antiquated assumptions and feelings of entitlement that our modern world has no place for. It also underscores the fact that this isn’t a story about men, it’s a story about people. Human beings relying on each other for survival is the oldest story there is, but also the most current of current affairs. As is poignantly stated in the play, “We save each other.”

Now go save yourself the frustration of having missed this rarely-produced play. Men on Boats runs only two more weekends, at Cohesion Theatre Company. It’s a cleverly directed production with a top-notch cast; well-crafted costume, light and sound designs; and a heroic set. Don’t miss it!

Men on Boats plays through June 18, 2017 at Cohesion Theatre Company, performing at The Fallout Shelter at United Evangelical Church – 923 South East Avenue, in Baltimore, MD. Tickets can be purchased at the box office or online.

A special industry night performance will be held Monday, June 12th at 8 pm, at which tickets for all artists will be $10. 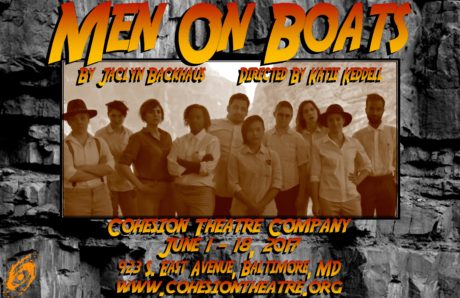