David Ives brings the comedy of Molière, with this hilarious “translaptation,” into the 21st century to delight us all. With The School for Lies, Shakespeare Theatre Company presents another gloriously fruitful collaboration between Ives and Director Michael Kahn. Ives worked directly from the original French, and he and Kahn updated it from the 2011 Classic Stage Company production. Ives’ dazzling rhymed couplets, along with the marvelous acting, make it a celebratory occasion. The ingeniously modernized court of Louis XIV, the Sun King, has never been funnier.

Based on The Misanthrope, believed by many to be Molière’s greatest work, the play opens with a monologue by Philinte (Cody Nickell). In his fearfully and wonderfully complicated court costume, he announces that we should pity poor 1666, given that our lives are placid… “and all our ills solved by techno-fix” – unlike in the 17th century, when an assortment of buffoons “actually held positions of great power.” This sally was greeted by hollow laughter.

Our hero, Frank, is played by Gregory Wooddell, with a hairstyle a la Legolas and a disarmingly cheerful dislike of all hypocrisy. He wears solemn black, in contrast to the other characters, who sport elaborate, brightly colored clothing. His friend Philinte is in love with the honest Eliante (Dorea Schmidt) while Frank falls for the witty, worldly Celimene (Victoria Frings). Both Frank and Celimene face lawsuits from people whom they have insulted.

Celimene’s other three suitors are each foolish in their own way. Oronte, a non-gifted “boulevard bard,” is played by the always enthralling Tom Story, so well costumed and made up that I failed to recognize him. He has scarlet hair, which stands up in devil-like horns on the top of his head. His outfit displays a large portrait of (what else?) himself. His exchanges with Frank, who in true misanthropic fashion refuses to praise Oronte’s excruciating effusions, evoke such mutual horror, that it is hard to imagine them staying in the same play, much less the same room, for very long.

Clitander (Cameron Folmar) extols connections at court which Celimene hopes will sway the outcome of her case. Liam Craig, the well-oiled Trinculo from STC’s The Tempest, plays Acaste, a marquis of substantial liquidity and self-satisfied stupidity. Clitander places his hopes in his influence, and Acaste in his wealth.

Victoria Frings’ Celimene rises to the occasion with entertaining send-ups of narcissistic lawyer “D” and Valley-Girl-like Baroness “B.” The attraction between her and Frank is apparent from the beginning, and to those who wonder about their future I can only say, with Molière, that “Reason is not what decides love.”

Dorea Schmidt’s Eliante, sweetly sincere and slightly loopy, is the most likeable character on stage. She handles the rapid reversals of her role with an air of winning, largely misplaced trust.

A popular flirt like Celimene must naturally carry in her wake a female detractor (usually moralistic) who condemns her every move. The irresistible Veanne Cox, in an unfortunate puce gown, with purple hair emanating from her head like the Bride of Frankenstein, is spectacular in the role. Michael Glenn (Dubois/Basque) excels in caustic commentary. Cody Nickell’s Philinte has an exuberant turn in the finale as a sort of deus (or dea) ex machina.

I have rarely seen more inventive costumes, by Murell Horton. Scenic Designer Alexander Dodge has devised a stunningly original set. The couch is a pair of deep red lips. There is an Ionic column topped by a gigantic cherry in a spoon. There is what appears to be a cage with a balloon dog inside it hanging from the ceiling.

We begin with a kind of Baroque synthesizer music; Composer is Adam Wernick, and Sound Designer is Christopher Baine. Mark McCullough’s lighting design rounds out the creative team. Don’t miss this visually and aurally luxurious evening.

Molière was an artist of many tribulations. In his youth, audience members pelted him with baked apples. He inspired the hatred of doctors, lawyers, priests, and all categories of individuals he had insulted. His marriage was unhappy.

Still, despite their differences, he had a firm friend in King Louis XIV. After the playwright’s death, the elderly Louis asked Molière’s friend Boileau: “What will have been the greatest accomplishment of my reign?” “There can be no doubt, Monsieur,” Boileau replied. “Molière.” The king, astonished at first, said, “Really, that buffoon? I wouldn’t have believed it.” But (according to Prince Michael of Greece), he then turned to Boileau and said, “But you know more about these things than I, you are no doubt right.” 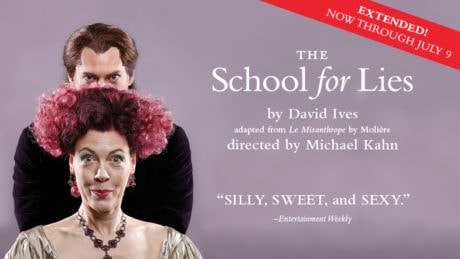