Though a generation apart in age, Norman Rockwell (1894 New York City-1978 Stockbridge) and Andy Warhol (1928 Pittsburgh-1987 New York City) captured the tenor of their respective eras of 20th-century America in popular art and illustrations that were familiar and affordable to the general public. Together they portrayed nearly 100 years of who we were and how we’ll be remembered for both contemporary audiences and posterity.

Opening with a gala reception on Saturday, June 10, at the Norman Rockwell Museum in Stockbridge, Massachusetts, “Inventing America: Rockwell and Warhol” is a landmark exhibition that pairs the two artists for the first time, to explore the parallels between them and their iconic oeuvre. Along with an array of 100 world-famous works from different phases of their careers, the show will include preparatory studies, personal artifacts, and archival material, along with films, photographs, and videos of the artists, drawn from the collections of the Norman Rockwell Museum, The Andy Warhol Museum, RISD (Rhode Island School of Design) Museum, Williams College Museum of Art, and a number of private collectors.

In conjunction with the central two-man exhibition, a retrospective of the work of Warhol’s nephew James Warhola (b. 1955) – a well-known New York-based artist and illustrator in his own right – will be featured in “James Warhola: Uncle Andy and Other Stories.” The Warhola show will include original paintings executed in oil and watercolor for a variety of illustrative genres in the world of publishing, from book covers to trading cards, from his early years up to the present.

I spoke with Jamie this week, prior to the opening festivities, to get a sneak preview of the exhibitions and companion events. The Norman Rockwell Museum is located in the beautiful Berkshire Mountains, so if you don’t live in the area, it’s a great place for a summer vacation or a quick getaway, just a few hours from New York City.

Deb: How did your involvement in the exhibitions at the Rockwell Museum come about?

Jamie: Stephanie Plunkett, Deputy Director and Chief Curator of the Rockwell, and Jesse Kowalski, Curator of Exhibitions – formerly with The Andy Warhol Museum in Pittsburgh – organized the show. They came to me with the idea, and our family was happy to loan some of the works we have by Uncle Andy to the exhibition. I was invited by them last year to present a PowerPoint lecture in advance of this summer’s show and events, to give some background on my art and some personal insights into my uncle and the impact he had on my career. In the talk, I noted that, as an illustrator, I was also very inspired by the work of Norman Rockwell, so it’s good to see two of my most important artistic influences exhibited together at the museum.

Tell us about the concept behind the Rockwell/Warhol exhibition.

While it seems like an odd combination at first, it’s actually surprising to me that it hasn’t been done before. Both created art for the masses, and both had to think about how to bring their ideas and visions of America to life. In essence, each held a mirror up to America and reflected our culture in their art. Both bridged the gap between what was previously considered high art (the fine art of painting) versus low art (commercial art and illustration). They shared a common procedure of working in consultation with art directors for the purpose of advertising, which taught them how to make an idea work, how to make it pleasing, and how to attract the attention of buyers. They had to work quickly, to meet deadlines, and also had to develop their skills of great design, color, and control. And both artists often injected humor into their serious themes of American life. So even though Andy was about 25 years younger than Rockwell, there are a lot of interesting similarities highlighted in the show that will make people think.

What role do you have in the exhibition and related events?

I’m Co-Chair of the “Legends Gala” opening-night festivities on June 10, with Geoffrey Rockwell – the artist’s grandson. It’s nice that both families are represented and we’ll both get to say a few words. Gerard Malanga, who was a major figure at The Factory [Warhol’s famous silver studio of the ‘60s], will also be there to make a few comments. The evening includes a cocktail reception, a tour of the show, and dinner on the terrace, followed by a “Studio 54 Dance Party” outside on the grounds [Andy was a regular at the New York club in the late ‘70s]. The curators also asked me for a show of my illustrations, outside of the Rockwell/Warhol exhibition. It will contain 35 pieces spanning my career and my works in different genres: science-fiction/fantasy, children’s books, pieces for Mad Magazine, and the Garbage Pail Kids. I’ll return to the museum later in July to give a lecture on my uncle’s illustration period, which lasted about twelve years, and his transition into Pop Art.

What are some of your favorite works by Warhol and Warhola featured in the exhibits?

From my family’s collection, we have some of my uncle’s early student paintings from college, including the funny Nosepicker and Living Room (a view of the main room in the house where he grew up in Pittsburgh), and one of his Pop portraits of Marilyn Monroe, the Double Marilyn. I’m also lending one of the works that Andy gave me when I was a kid, a Self-Portrait of 1967, painted in two colors separated diagonally, which refers to his two sides – public and private. Two weeks after he was shot in 1968 (I was 13 at the time), I visited him in the hospital and asked him for one of the paintings in the series. Two days later, he told my father to tell me to pick one out and bring it to the hospital for him to sign. He signed it for me in ballpoint pen, “Love, Uncle Andy” with hearts, so that painting means a lot to me.

Highlights from my show are my paintings for the covers of two books by science-fiction author Robert Heinlein, Stranger in a Strange Land and Glory Road, and for Neuromancer, the first cyber-punk novel, written by William Gibson. I think one of my best works, on loan from a private collection, is Visitors Night at Callahan’s, which I did for Spider Robinson’s Callahan’s series. And there are also several illustrations from the children’s books I wrote, Uncle Andy’s: A Faabbbulous Visit with Andy Warhol and Uncle Andy’s Cats. Again, those hold a lot of memories and personal significance for me, and are especially relevant in the context of these companion shows.

Thank you, Jamie, for giving us an inside look at the exhibitions and programming, and for some personal insights into the art of American illustration. I look forward to seeing the show! 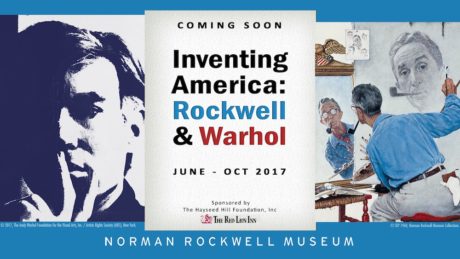