Winner of five Tony Awards in 2015 – including the first-ever Best Musical honors given to a show written entirely by a team of women – Fun Home, with book and lyrics by Lisa Kron and music by Jeanine Tesori, is now playing a national tour with a six-day stop at the Forrest Theatre, and Philadelphia audiences couldn’t be more fortunate. A co-presentation of the Kimmel Center for the Performing Arts and The Shubert Organization in their blockbuster Broadway Philadelphia series, the history-making female-centric musical – the first on Broadway to feature a lesbian protagonist – is based on the eponymous graphic-novel memoirs of cartoonist Alison Bechdel, in a unique and affecting coming-of-age and coming-out story that hits all the right notes.

Staged as a non-linear sequence of key episodes from Bechdel’s childhood and college years with a dysfunctional family and a first love, her recollections come to life (tunefully expressed in the company’s bittersweet opening number “It All Comes Back”), as she reflects on her past, reviews the diaries she kept, and intersects with her younger selves while creating the autobiographical drawings and captions for her best-selling book. Through it all, Director Sam Gold, Music Director Micah Young, and a superb cast of ten interweave the characters’ movements, songs, and experiences with seamless fluidity and endow them with real human emotions that speak to the ambivalence, vulnerability, and ultimate necessity of recognizing, accepting, and being true to who we are (concluding with the trio of Alisons’ uplifting paean “Flying Away”).

The three ages of Alison are portrayed with three-dimensional complexity and sensitivity by the consistently excellent Kate Shindle as the present-day 43-three-year-old, Carly Gold as the ten-year-old child, and Abby Corrigan as the young-adult college student. Each delivers a believable range of feelings, psychological insight, and powerful vocals that capture her essence and growth, her highs and lows, and her honest and intimate appraisal of herself and her family. Shindle is controlled, introspective, and moving as she observes her development with a balance of objectivity, humor, and melancholy, culminating in her haunting ballad “Maps.” Corrigan is irresistible as she conveys hesitancy, awkwardness, and jubilation at her first sexual encounter with the strong, self-assured, politically-active Joan (well-played by Kally Duling), whom she lauds with love-struck devotion in the exuberant “Changing My Major.” And Gold displays her enormous talent as the Small Alison, stealing our hearts with her captivating charm, prodigious emotional and psychological depth, and masterful vocals; her prescient “Ring of Keys” is a highlight of the show.

Robert Petkoff is a seething bundle of repression, rage, subterfuge, and evasion as Alison’s closeted gay father Bruce, with whom she shares an equivocal relationship and a commonality that remains sadly unspoken (“Telephone Wire”). Though accomplished at restoring historic houses and antiques, he is incapable of putting his own life and household in order, as he laments in the soul-searching “Edges of the World.” Susan Moniz as his long-suffering wife Helen poignantly expresses her pain and regrets of a wasted life, given away in complicit silence, in “Days and Days.”

Luké Barbato Smith and Henry Boshart as Alison’s younger brothers Christian and John provide moments of ingenuous amusement as they join their family in singing a “Welcome to our House on Maple Avenue,” spin in circles to don a jacket, then offer some morbid laughs as they hide with their sister in an empty casket, dance around it with abandon, and invite us, in a mock commercial for the family business, to “Come to the Fun Home” (their disturbing name for the funeral home inherited and directed by their father). Rounding out the cast is Robert Hagar as a series of the men and boys with whom Bruce engages in secret dalliances, and in a fabulous song-and-dance fantasia, “Raincoat of Love,” inspired by Small Alison’s TV viewing of the happy home life presented in The Partridge Family.

Danny Mefford provides hilarious choreography for the over-the-top dance numbers, and the Fun Home Orchestra underscores the shifting moods of Alison’s reminiscences with subtlety and beauty. David Zinn’s lavish set encompasses the Bechdel’s treasure-filled house, the rooms and accoutrements of the funeral home, and the drafting desk at which Alison works. Costumes, also by Zinn, evince her innate preference for boyish clothes over the pink “Party Dress” her father belittled her into wearing as a girl, and Ben Stanton’s lighting design is effective in spotlighting Alison’s most vivid memories and obscuring others that have dimmed with time.

If you didn’t make it to New York for the original Broadway production of Fun Home, don’t miss the opportunity to see this stellar show on its top-notch national tour. 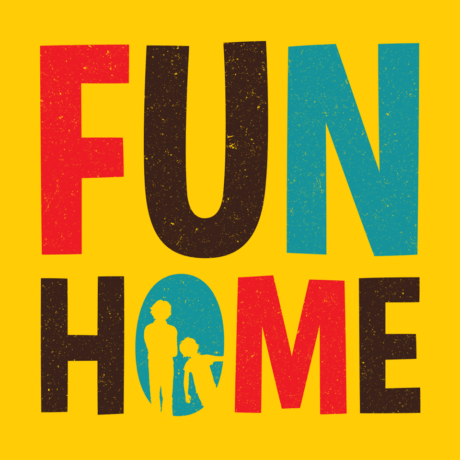