Economic self-interest, an ‘inconvenient truth,’ a ruthless politician, a whistleblower, ‘fake news,’ closed-door meetings, a bureaucratic cover-up, the refusal to work together for the common good, the vilification of an honest person by the fickle masses – sound familiar? Unfortunately, society is still grappling today with the same issues Norwegian playwright Henrik Ibsen addressed in his classic indictment of the “tyranny of the majority” in 1882, and Wheelhouse Theater Company’s concise razor-sharp adaptation of An Enemy of the People, now in production at the Gene Frankel Theater, hits home and hits hard.

When Dr. Thomas Stockman discovers that the water of the healing baths at the new municipal spa – his small town’s intended financial mainstay – have been contaminated by bacteria in the drainage system that could cause serious harm to those who use the facility, the potentially life-saving news is at first welcomed with gratitude and the promise of support from the local press and civic organizations. But his findings are met with resistance by his brother Peter – the Mayor and Chairman of the Board of Baths – who attempts to suppress Thomas’s report, raises concerns about its impact on the town’s finances and the cost to taxpayers, and convinces his brother’s advocates to switch sides in the controversy. Despite the threat of severe consequences for his actions, the honorable doctor, much to his own detriment, remains committed to exposing the facts and ‘doing the right thing’ for the good of the people, even after the Mayor removes him from his position as Medical Officer of the Baths and the entire town has turned against him and his family. Will he stand his moral high ground when an unexpected piece of beneficial news surfaces and his erstwhile supporters return to him with a conciliatory proposal to regain their allegiance?

Directed with insight and precision by Jeff Wise, Wheelhouse’s inventive version is fast-paced and focused, employing a pared-down cast of six to tell the story of one man’s ethical adherence to the truth in the face of mutable public opinion, while underscoring how quickly loyalties shift and an altruistic hero is renounced as the titular “enemy of the people.” Michael Schantz turns in a powerhouse performance as Dr. Stockman, capturing his unshakable integrity, increasing moral indignation, offensive tirades to the crowds, and ultimate obstinacy in remaining in a town that has scorned him, righteously declaring that “the strongest man in the world is the man who stands alone.” There is both passion and humor in his portrayal, as Ibsen intended; he is intent on his purpose and intense in his extreme idealist principles, then comically fervid in his tactless insults to the corrupt government and the “uncultivated” populace.

Supporting Schantz are Stacey Linnartz as Thomas’s concerned but devoted wife, Christina Toth as their modern idealistic daughter Petra, David Kenner as his brother and nemesis Peter Stockman, and the excellent Joshua David Robinson and Ben Graney as the easily swayed newspaper publisher Aslaksan and editor Hovstad. The ensemble also serves as a modern chorus, providing the activity and noise of the throngs of detractors and supporters (at one point breaking into an amusing round of “For He’s a Jolly Good Fellow”) and moving together in flawless synchronization. When their characters are not featured, they sit in frozen silence at the sides of the stage, efficiently facilitating their active castmates’ use of props and costumes, and enabling the advancement of the narrative.

Brittany Vasta’s sparse post-modern scenic design of four platforms and a back wall in blond wood is furnished simply with movable wooden chairs, a floor lamp, and vintage typewriters, allowing for the unencumbered clarity of Wise’s impactful blocking and subtly accentuating the play’s timeless import. Costumes by Christopher Metzger also smartly suggest a synthesis of Ibsen’s era with our own, and lighting by Drew Florida includes an evocative noir-inspired opening, with the actors silhouetted in the darkness of haunting backlighting.

Under Wise’s astute directorial vision, Wheelhouse Theater Company’s production of An Enemy of the People delivers Ibsen’s message with a balance of wit and weight, affirms its contemporary relevance, and leaves us to consider our own moral fiber, in begging the universal question: “How difficult is it to stand up for what you know is true?” This is a show to see and a director and company to watch. 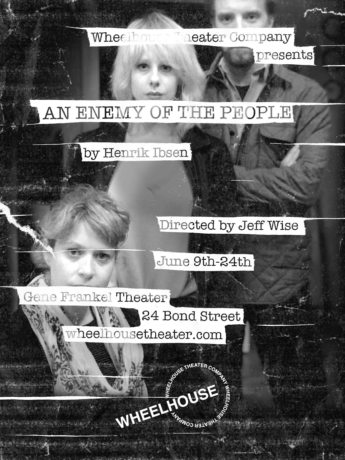 An Enemy of the People plays through Saturday, June 24, 2017, at Wheelhouse Theater Company, performing at the Gene Frankel Theater – 24 Bond Street, NYC. For tickets, purchase them online.